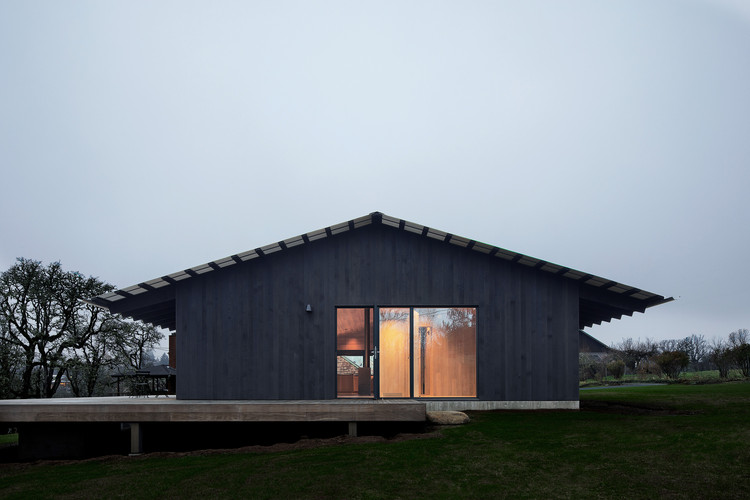 Text description provided by the architects. The Divine House is located along the McKenzie River outside of Eugene, Oregon. Approximately 50 feet above the water level, the structure is sited on the northern, upper end of a sloping lot overlooking a dramatic bend in the river. The house has a simple rectangular footprint and a gable roof with deep overhangs. It is directly organized down the centerline of the plan below the ridge. The northern half contains the smaller, more cellular programs— the carport, the entry, the guest area, the bathroom, and the primary bedroom. The southern half is entirely open and includes the living and dining areas, the kitchen, and an adjoining covered deck. The width of the rooms and the generous depth of the overhangs was based on the maximum length of local Douglas fir structural members.

The spaces of the house are defined using a series of ‘solid’ volumes, which allow for multiple routes and notably free movement throughout the interior. Contained within this highly articulated poché are storage areas for clothing and household items, mechanical spaces, as well as the laundry area and bath. The positioning of these volumes reinforces the organization of the house along the ridgeline and establishes the distinct spatial character of the two halves of the plan.

Sightlines were developed to provide a range of views within and through the house and give an immediacy to the grounds and the river without undercutting desired privacy (to the extent that the interior doors are largely rendered redundant). Conceived as part of the main living room, an expansive hardwood deck extends out towards the river and will weather to a silver-grey. The deck, which covers the same area as the interior of the house, works in tandem with the interior volumes to expand the field. The material palate and methods of construction are direct and robust.

The most prominent feature—the roof— is raw corrugated aluminum which will oxidize and dull in appearance over time. It uses a concealed clip system installed over a grid of battens and counter battens, the latter of which also function as outriggers on the gable ends. The siding is 5” wide clear cedar planks, finished in black pine tar. They are furnished in full lengths and key precisely into the building geometry. Similar to the roof, the wall detail employs a fully vented assembly of battens and counter battens.

The interior also is constructed in a similar fashion and given a similar finished expression— in this case, 5” wide plain sawn white oak boards, fully coordinated with the geometry throughout. The articulation (rather than the coloration) unifies the inside and the outside and de-emphasizes the applied nature of the finished surfaces. The interior ceilings are installed over a lowered array of joists in order to lend more intimacy to the spaces and conceal the beams below the roof ridge and at the headered openings along the North and South facades.

The effect of suppressing the principal structure through this fur down focuses the view out towards the landscape and, in concert with the storage volumes, lends the interior a strong sculptural quality, all enveloped in a single material. A hard wax oil was selected for the finish to maintain the raw appearance of the white oak.