Save
New House in the Old Garden / kaa-studio 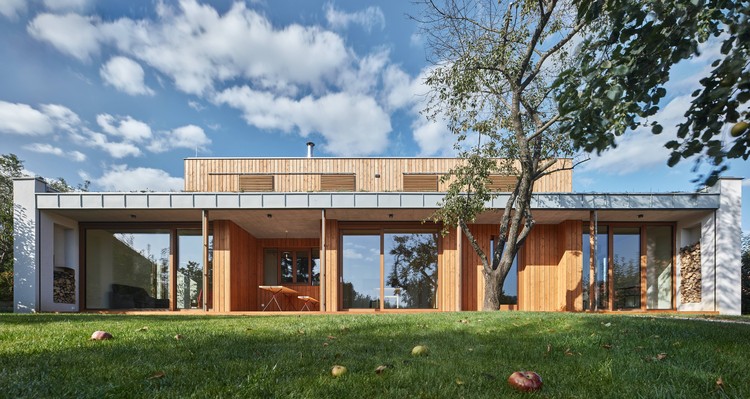 Text description provided by the architects. We wanted the house to fit gently between the surrounding houses of the original built-up area and the trees of the old garden, to be able to take advantage of the views and natural resources, and the house to function well naturally in terms of heat and economics, without current artificial "passive standards". The task was to design a house for a family of four. Parents who work daily in artificial open-space office had a fundamental desire for natural materials and intimacy. The children's section was required to be easily separable from other areas, prospectively for the time when the children grow up. Great attention was paid to the client's economy of the house and operation of the house, shading both from the sun rays and during the light pollution generated by the house at night. An outdoor covered space was required for year-round seating and drying of fruits and herbs.

The plot is situated near Prague, on the southern slope above the Berounka river with a beautiful view of the Brdy hills. The land is accessible from the south, which has become challenge in terms of the layout. There was an old hut and mature trees in the garden - old fruit-bearing in the lower part and conifers and walnut in the upper part of the garden. In the design concept, we wanted to use the maximum allowed space for building the house on the land and to concentrate most of the functions of the house, for easy access, on the ground floor (social and parents' part), and a smaller children's part upstairs.

We stretched the main mass of the house as much as possible between the eastern and western borders in order to create the longest possible southern facade - warming up / heating the house by the sun during the heating season. The summer sun, on the other hand, is naturally shaded by the recessed glazed façade (porch). We tried to place the house on the plot as high as possible to get the best views of the region from the house, we also considered neighbouring buildings (privacy) and had in mind old mature trees. As a result, we decided to place the house roughly in the middle of the plot and at the same time we created two gardens - a southern sunny orchard and a northern shady grove.

The main ground floor of the house is made of solid material of ceramic blocks (without external insulation) and partitions, and is covered by a concrete ceiling (feeling safe). The roof above the ground floor is designed as a garden, a meadow with butterflies. On top of it, there is a light wooden shed/hut, as a place for teenagers. Access to the house is via a wavy path leading from the main road. The garage was placed in the lower part and thus not obscuring the views from the living area. Behind the house, there is a garden house with sauna, attached to part of the original hut.

The layout of the ground floor is divided into a southern social and northern private part. The southern part has five segments, one of which is the entrance hall. Along the entire south wall is a recessed porch, the space between the inside and outside areas. On the wooden floor, there are two children's rooms in the corners with a common central hall and access to the roof garden. The most beautiful views. 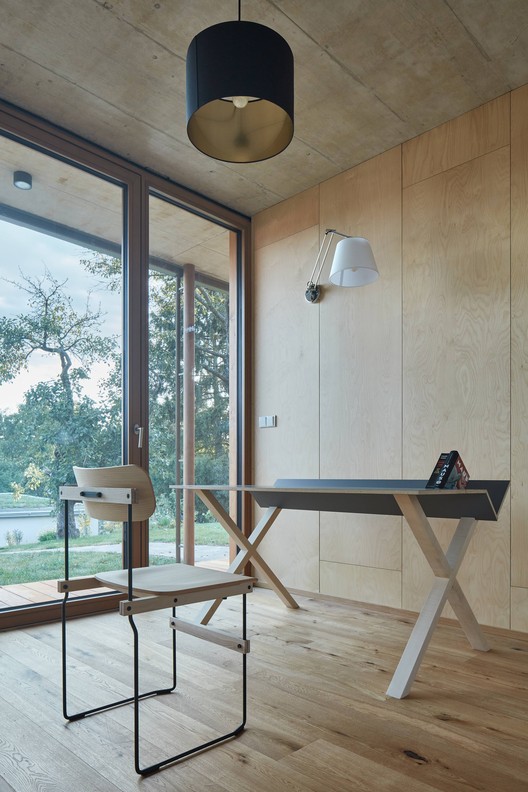 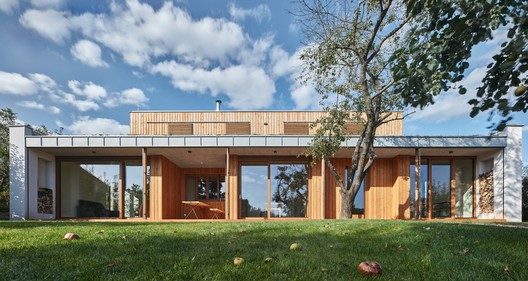