Text description provided by the architects. The Springvale Community Hub is a flagship project for the City of Greater Dandenong, incorporating a large library, civic spaces, and council offices set amongst a playful, public parkland. It acts as a mirror to the community of Springvale—one of the most culturally diverse communities in Australia—and reflects the unique identities of its residents and the urban context it resides in. The Hub embodies the importance of representation and connection and is intended to foster a sense of civic ownership—intertwining cultural narratives of the area into the fabric of the building. The result is a coalescence of diverse public spaces that encourage interaction and community connection. The building wraps around three ancient and significant River Red Gums, connecting with landscape and creating a focal point for the building.

Inspired by the immigrant journey, the project is laid out in ‘layers of history and features a flowing landscape and ‘migrant’ trees. A continuous path links the precinct with barbecues, public seating, playgrounds, sports courts, a memorial, an indigenous ceremonial place, a playful children’s water feature, and the significant ‘Enterprise’ rose garden (representative of the immigrant journey of Springvale). These activated community facilities intersect with a gently sloping community green that faces back towards the Hub’s café and a large urban screen for public events. Inside visitors are welcomed by the porous ground floor into a modern, state-of-the-art library and three ‘grand’ double-height spaces–the Technology Hall, Service Hall, and Exhibition Hall.

Dominant colours in each space and the location of each hall assist with wayfinding. The coloured timber panelling throughout pays homage to nature and culture—the Service Hall’s rich reds signify the Enterprise ‘rose’, greens in the Technology Hall nod to the gums, and the ‘golden’ hues of the Exhibition Hall reflect the site’s civic origins. Level one provides access to noisier, more public spaces such as customer service, public computers, the Kids and Junior area, and a café. Upstairs visitors can find quieter, more private spaces such as ‘The Lounge’, ‘The Studio’ makers’ space, and a variety of civic rooms for hire offering computer bays and casual seating. From level two visitors gain a 360 view into the Technology Hall, access to a generous wrap-around balcony, and a light-filled experience through an extensive series of skylights and windows. From the gardens to The Studio, sustainability is incorporated into the project’s performance and design.

The Hub achieves a 6-star Green Star and carbon-neutral rating through rainwater management systems, large photovoltaic panels, heating/cooling systems, and aspects of the façade’s design. The northern façade acts as verandah and veil, sheltering the users within and creating a series of protected outdoor spaces along its edge – all focused towards the River Red Gums. Large windows perforate the building’s envelope in every direction, improving wellbeing and reducing energy consumption. Each façade orientation reflects an aspect of the suburb of Springvale.

The key ‘civic’ Western facade (facing Springvale Road) ‘ripples’ with a rainbow of custom glazed bricks to conceptually reflect the various flags that make up the demographic of Springvale. The Northern facade curves around the ancient River Red Gums with timber fins and fritted glass panels. The Eastern elevation mimics suburban terracotta pitched roofs and the Southern facade ‘extends’ to form the library car park. 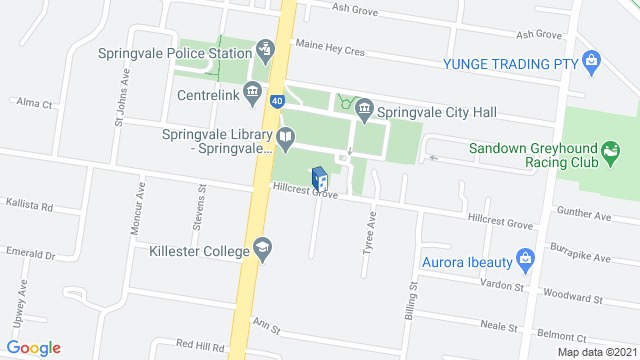 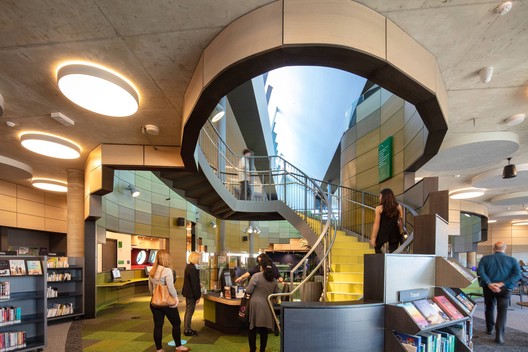