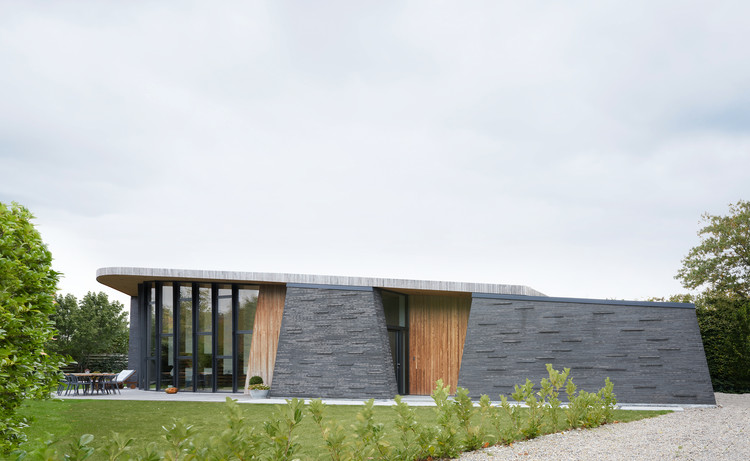 Text description provided by the architects. The design for this self-built villa in Aarhus, Denmark, transforms an ordinary plot of land into an extraordinary place. In the old part of Risskov, located north of the city of Aarhus, with close proximity to the water and the forest, Boomerang House is nestled into a lush, green garden surrounded by tall hedges and mature trees.

From the beginning the site was unremarkable, but with the guidance of the architect, the project as a whole has become an exceptional place. Located 120m from the seashore, the area was originally planned as a lower-density area for holiday homes, where the citizens of Aarhus would spend their leisure time. Over the years, the area has evolved with a majority of homes as permanent residences, all the while maintaining a green and tranquil atmosphere.

The architectural concept of the house is radically different from conventional planning practices of the day, for a parcel of this nature. Typically a building volume would be planned in parallel along one of the property boundaries to allocate as much free space for a garden as possible.

After carefully studying the compact lot, in consideration of the owner’s demands, Copenhagen firm AJG Architects deemed a conventional organisation would give a large part of the garden area significantly less user value and a large portion of the house facades would not optimise conditions of daylighting and garden view.

Project leader Kasper Ax proposed a bold design where the building volume is actually located centrally in the garden. “We achieved a feeling of fusion between house and garden in as many interior and exterior spaces as possible by placing the main part of the building volume in the center of the garden. The organic design thus divides the garden into a number of contiguous outdoor living zones, which gives the garden high utility value at all times of the day.”

The house itself is designed as two heavy, bricked solids at each end of the garden, that carry a lightweight, floating organic roof clad in ash wood, thus creating a central open and transparent common living area with connection to all portions of the house.

The owners have been responsible for the majority of the construction. This self-build model enabled more freedom, a higher level of craftsmanship, and an overall experimental approach to the design process. Together a wealth of tailor-made details were considered, in special conditions in regard to the processing of materials that have given the house its true one-of-a-kind character. 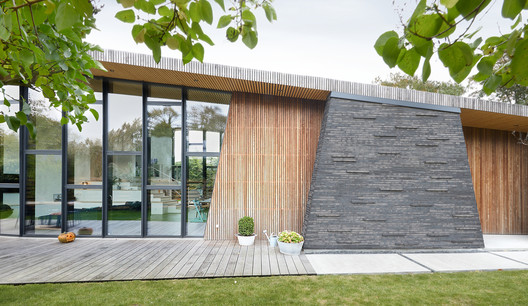