Save
More Daylight but Less Glare & Heat: How Does Automatically Tintable Glass Work?
This article is sponsored by:

In a 2016 survey of 400 employees in the U.S., Saint-Gobain found that office building occupants commonly complained about poor lighting, temperature, noise, and air quality, leading the company to deduce a need for improved lighting and thermal comfort in buildings while also maintaining low energy consumption and freedom of design for architects and clients. Their solution was SageGlass, an innovative glass created first in 1989 and developed over the course of the past three decades. The glass, which features dynamic glazing protecting from solar heat and glare, simultaneously optimizes natural light intake. A sustainable and aesthetic solution, SageGlass’ adaptability to external conditions dispels the need for shutters or blinds.

To function, SageGlass utilizes an advanced predictive daylight algorithm taking into account temperature, illuminance, occupancy, window size, time of day, season, building orientation, sun angle, and sky conditions to accurately regulate tint for optimal conditions. This permits the minimization of glare without the need for shading devices, while still optimizing the amount of natural light to reduce the need for artificial light and energy expenditures. These system inputs are tracked by rooftop and façade sensors, which can be integrated with existing building management systems (BMS). Finally, glare control and tint variation can also be manipulated manually through a mobile application or touch screen, rather than relying exclusively on automatic sensors and processes.

There are four options for tinting: none, light, strong, and dark, each of which transmit light ranging from 60% to less than 1% respectively. Depending on the version selected, the glass can also be tinted partially: SageGlass LightZone, compared to the basic SageGlass product, can be divided into up to three independent areas of tinting, which provides more precise solar control and an excellent interior color rendering; SageGlass Harmony features more gradual tint transitions and ‘enhanced biophilic design.’

How Does Spot Work? The Robot That Compares Design to Reality at the Construction Site

The benefits of SageGlass extend beyond lighting control. The tinting works to maintain pleasant indoor temperatures, admitting just enough solar heat energy to maintain comfortable indoor conditions and reducing the need for heating, air conditioning, and artificial lighting. In turn, the elimination of shading features such as blinds and shades reduces the frequency of maintenance, which then saves costs. Altogether, these properties can also help obtain energy and sustainability certification, including LEED, BREEAM, etc.

SageGlass has been used in a wide variety of projects, including Saint-Gobain’s own office building in Paris, France. As stated by the architects, glass “remains an emblem of Saint-Gobain’s traditional activity and thanks to its crystalline architecture, the tower emphasizes its aesthetic qualities and its properties of light transmission, thermal insulation, and low emissivity". Through the use of SageGlass, the tower’s offices, greenhouses, and reception areas enjoy strong natural lighting while exemplifying environmental concerns and maximized energy efficiency. Beyond this tower, other projects that utilize SageGlass—of which there are over one thousand—include: the Nestlé Headquarters in Switzerland, Tombola in the U.K., Weitblick in Germany, Ashford Castle in Ireland, and Bowie State University in the U.S. 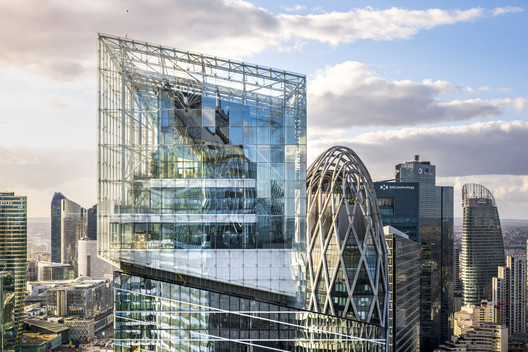