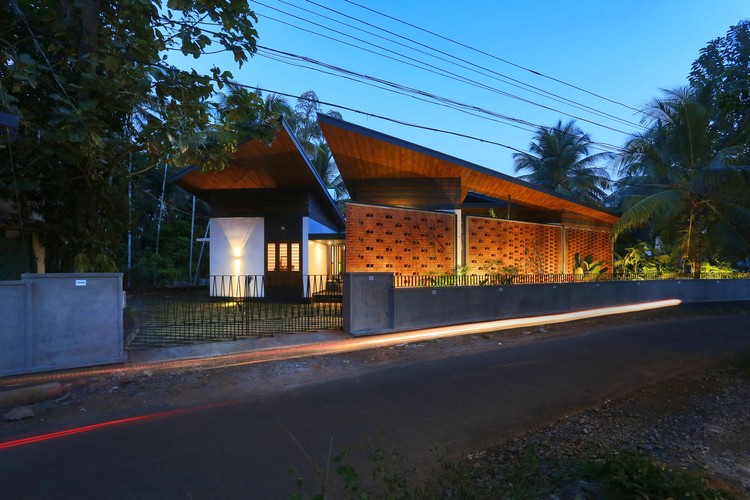 Text description provided by the architects. Traditional Kerala homes are rich in memories; of the long-forgotten smell of the first rain, the sound of raindrops falling in the courtyard, people sitting and conversing around it, the feeling of the warmth of mud walls and wood, the coziness of spaces; one may find him or herself drifting into their nostalgic memories of yesteryears every once in a while.

'Kecheriyile Veedu' is an attempt at recalling these memories. As a home for an elderly couple enjoying their retirement, all the spaces are limited to a single floor, easing their movement within the house. Despite being tightly packed in an odd-shaped 11 cent plot, the two triangular sky courts make the spaces airy and well lit.

These courts are flanked by a long wall facing west, having bricks arranged in a certain pattern forming a series of perforations and projections to catch the wind and block the harsh west sun. A typical single storey structure attracts more heat gain than its multi-storey counterparts.

To address this issue, we used two layers of roofing: a flat slab spanning the interior spaces and a truss roof stretching over the entire structure, thus creating an interspace in between which absorbs most of the heat. The reminiscent of a distant past; the material palette for the Kecheri house is essentially earth tones:- brick, stained concrete, cement plaster, and wood.