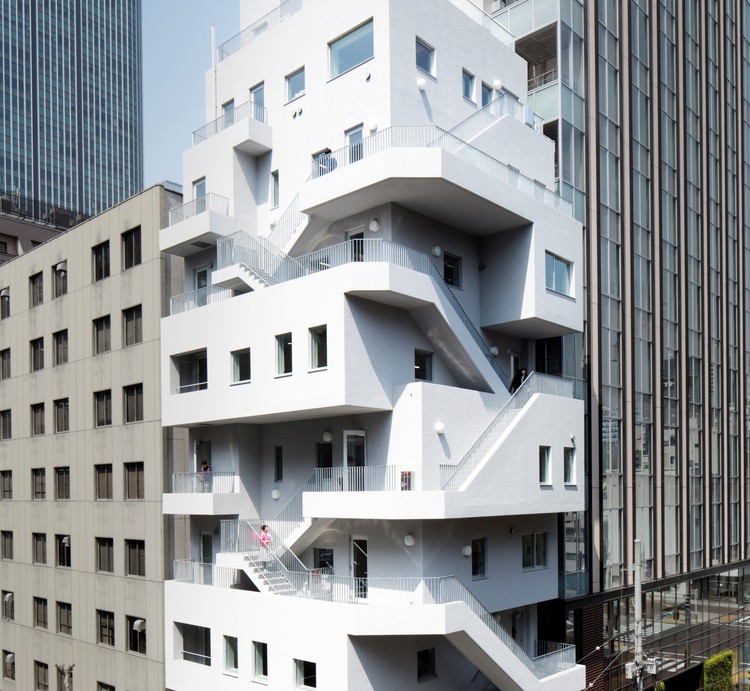 Text description provided by the architects. This is a project to rebuild the owner’s office and residence as well as office space for rent on a street corner of Nishi-Shimbashi, Minato-ku, Tokyo’s historic business district. Many of the mid-story rental buildings, which occupy the majority of Tokyo’s commercial and business districts, are now facing rebuilding time. While there are large development projects like Toranomon Hills along the main streets near the site, buildings of similar size can be found along the back streets. ARAKAWA Bldg. has long contributed to its surrounding cityscape, along with the growth of the owner’s business. In its rebuilding, focus was placed on creating a building that would shape an attractive cityscape for the future by revisiting the potential of the building.

This is a project to rebuild the owner’s office and residence as well as office space for rent on a street corner of Nishi-Shimbashi, Minato-ku, Tokyo’s historic business district. Many of the mid-story rental buildings, which occupy the majority of Tokyo’s commercial and business districts, are now facing rebuilding time. While there are large development projects like Toranomon Hills along the main streets near the site, buildings of similar size can be found along the back streets. ARAKAWA Bldg. has long contributed to its surrounding cityscape, along with the growth of the owner’s business. In its rebuilding, focus was placed on creating a building that would shape an attractive cityscape for the future by revisiting the potential of the building.

Adding attraction to the city - In many buildings, the connection to the city is limited to the ground floor where most commercial facilities are located. On the other hand, spaces above the 2nd floor are completely cut off from the outside by the stereotypical façade. As a result, a characterless cityscape is created. To address this, all levels of the ARAKAWA Bldg. are wrapped by emergency stairs, which are not only essential functional elements, but also work as an “engawa”-like space (veranda), as well as a buffer from the outside. The idea behind this was to create a new presence that reveals the activities of people within the building and, while adding attraction to the cityscape through its loosely woven relationship with its surroundings.

Maximizing building volume with uneven sculptural surfaces, and user-friendly regular shaped office spaces. The south and east sides of the building are subject to a strict height restrictions and setbacks above the 8th floor, peculiar to urban areas in Japan, established to ensure sunshine and daylight in living environments that face narrow streets. However, due to the sculptural building volume shaped by the configuration of the emergency stairs, sufficient lighting was secured for the surrounding environment, allowing the building to increase its height from 8 to 9 stories, maximizing the development volume. Even though the building may look inefficient in appearance, the shape actually contributes to “securing maximum usable space”, which is the most important benefit for office users.

Generally speaking, around a quarter of the planar shape of the interior space of a mid-story office building is occupied by the building core. If the emergency stairs were concentrated in one location in the conventional way, larger floor areas could be secured at the cost of irregular shaped floor spaces which tend to be difficult to use in many cases. On the other hand, by exposing the emergency stairs to the south and east façades, it enables a user-friendly regular shaped space inside the irregular shaped exterior.

Maximizing space by utilizing every structural element - In order to rationally construct a building on a site with many restrictions, all building components were utilized as structural elements. With a different footprint shape for each floor of the building, a flat beam system was applied to span the long axis of the space to avoid structural members dividing the space. Since the position of the flat beams vary on each level, the column at the southeast corner transforms in shape according to the location of the connecting flat beams. This helped to maximize the interior space while reducing floor to floor height. The column is exposed internally and as it takes on a different expression on each floor, it is referred to as a “totem pole” column. Miscellaneous walls and stairs, which are typically non-structural in conventional buildings, here act as seismic or bracing members to maximize the user-friendly regular shaped interior spaces, as well as to create a livery “engawa” space.

Lighting plan to create a sense of “expanse” To help the office spaces feel more spacious, the exposed concrete ceilings of the owner’s office floors (6F~8F) are illuminated utilizing a new linear system developed by combining ready-made up-light and downlight components to make the entire ceiling look bright. Through the combination of existing fixtures and components rather than a custom-made fixture, repair and maintenance is facilitated by simply replacing failed components. For the rental office floors (2F~5F), suspended ceilings are provided; however, the linear lighting fixtures are mounted directly on the ceiling providing a bright surface a similar way as the upper floors.

Interface with city and its surroundings - The dynamic building volume created by the emergency stairs and balconies provides a shading effect to the openings of the floors below. As a result, indirect natural light enters through the small openings without the requirement for blinds. In addition, the framed views provided by the small openings evoke a sense of anticipation toward the outside world, like looking at a piece of artwork. At the same time, the different views and a different sense of connection to the city on each floor will create an awareness of being loosely woven into the whole cityscape. In compliance with the Japanese Building Standards Act, only fire-rated fixed windows of maximum 1 sq m in size are applicable within 2m of the emergency stairs. Also, consideration of the rescue entrance (alternative entrance) as well as restrictions on load-bearing walls for structural design was required to secure the maximum number of effectively usable windows.

There are many buildings in Tokyo nearing the end of their commercial life and requiring rebuilding. We believe that if each building focuses on its relationship with its surroundings, this could potentially lead to a more attractive and lively city. Regardless of size, many buildings must address “the balance of maximum and optimal rentable floor area and safety for emergencies.” They must also address "diverse and active ways of engaging with the city," as unique buildings that are closely linked to the local community.

ARAKAWA Bldg. has solved both of these issues by the proposed “shape of the building” and its innovative approach to structure. The exposed external stairs become a place for relaxation as well as adding new expression as an interface with the city. The building has utilized the full potential of every building element, and now reveals the activities of the building users as an element of the building’s façade. Our intention is that the dynamic façade incorporating human activities would also create a new expression in the cityscape. 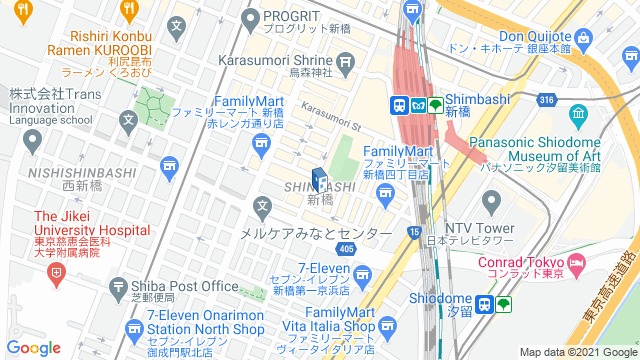 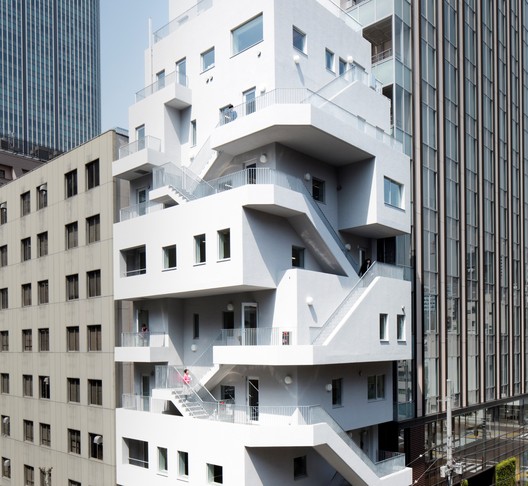