Save
Felicity Abbott: "Production Design Has Been Referred to as Architecture of the Screen"
Share
Or
Copy

Production designer Felicity Abbott is behind the great staging of The Luminaries, a mini-series that takes place in New Zealand during the 1860s West Coast Gold Rush. In the below interview, she tells us her thoughts on the connection between films and architecture, addressing her work process and the main challenges on this set.

Fabián Dejtiar (FD): Alongside set decorator and fellow New Zealander Daniel Birt, you researched, designed, and constructed the time period of the New Zealand colonial gold rush. Could you tell us about your work process? How did you translate all that on the set?

Felicity Abbott (FA): Production Design has been referred to as ‘architecture of the screen’, which speaks to the close relationship between the two disciplines. Production design is concerned with architectural space as it relates to what the camera sees and how an audience perceives the  ‘universal language’ of that spatial dynamic. My work often incorporates the use of architectural set design to give meaning to a particular narrative journey or to reinforce character, plot, or backstory.

In the screen adaptation of The Luminaries, the visual narrative is based on the same precise astrological principles as this complex novel, with characters and environments associated with signs of the zodiac, or heavenly bodies within the solar system. The design process involved a lengthy period of research, followed by concept pre-visualization and illustration, white card and 3D modeling in order to refine the ideas and techniques for the construction phase, and finally the scenic process and set decoration prior to filming.

I view production design as narrative ‘world building’. It interprets the visual ‘poetics’ of space through the exploration of emotion, the subconscious, memory and nostalgia using tone, style,  palette and texture. Designing the world of The Luminaries involved the construction of a broad range of architecture representative of 1860’s New Zealand. From English Gothic revival hotels to opium dens, weatherboard cottages to police camps. The design drew together diverse architectural styles to create an emotionally resonant connection to the past; from Chinese settlements constructed from organic materials such as stone, fern and mud to gold mining towns, tent encampments and cliff-top, bark flitch timber huts.

FD: The miniseries required 96 unique sets designed and built from scratch in New  Zealand, distinguishing it from the other period productions shot in Europe and the U.S.  How did you manage to scale all this work? How do you deal with deadlines, given the fact that the film industry operates fast? What is the range of experimentation you have?

FA: It was a complex challenge to balance the competing deadlines of 6 episodes of television content, a rigorous construction schedule, unpredictable weather and limited resources while maintaining a creative focus on the essence of the narrative. Production design is a delicate balancing act that involves constant creative compromise and re-imaginings in order to preserve the integrity of the design and the director’s vision while adhering to budget and schedule parameters.

Designing for a historical period requires a unique blend of historical accuracy, authenticity and in this case, a sense of modernity in the design and set decoration to underscore the heightened mystery and intrigue that unfolds in the story. Although we were building sets of a considerable scale, we were very specific about the finest details in the set decoration and scenic treatments, which are essential in giving a depth of character and credibility to the visual world.

One of the key sets is The House of Many Wishes, the character environment for Lydia Wells (Eva Green). A 4-storied timber building in an ornamental 'continental' Gothic revival style, with oriel windows and tudor-esque style chimneys, The House of Many Wishes exterior stands tall in the completed Dunedin streets set, an eccentric contrast to its architecturally conservative neighbors, with its elaborately ornamented façade.

The completed set was built in parts – the exterior façade was built outside the production offices and the interiors were built in several sections on stage, from the ground floor saloons, atrium, kitchen and hallways, bedrooms, living quarters and attic. Architectural details help to tell the story of the history of the building and set the tone for the action, to the extent that these intricate sets often take on their own character. I designed the main interior set as an unfolding ‘stage’, with 2 saloons, both framed by proscenium arches and a sweeping, theatrical staircase to allow for the action that takes place in these sets. The elaborate interior echoed its exuberant exterior: quatrefoil filigree panels in the stair and saloon, decorative over-mantels and lintels, carved wainscot timber paneling, resplendent with native, New Zealand floral designs, anaglypta wallpaper and hand-painted stained-glass windows.

Production design takes into consideration aspect ratios, lenses and sightlines - the camera’s focal length and the relationship from one point to another are crucial in designing intimate interior spaces or exterior large-scale sets. One of the many benefits of designing and constructing purpose-built sets is that it allows complete flexibility in performance, movement and coverage. From a design perspective, building sets allow for the production design to influence the tone and style and of the world at a cellular level, which in turn creates a cohesive visual narrative. I work very closely with the director and cinematographer to develop a cohesive vision and with the set decorator and my team of set designers and art directors, many samples and models were made and many hours spent on the various sites, pegging out structures and checking lenses prior to the start of construction.

FD: The luminaries won the best production design at NZTV awards. I wonder, what was the main challenge of all this great work you did?

FA: New Zealand is fairly remote and without many of the resources available in other countries.  This was a challenging project to realize given the period, scale and detail the story demanded. I was fortunate to have an extended research and development phase, as the wealth of knowledge gathered during this period informed the visual language and every subsequent design decision. A highly skilled creative team brought the design to life. What distinguishes the production design in The Luminaries from a similar production filmed in the  UK or US, is each of these environments was created from scratch rather than filmed in existing locations. In this sense, the ‘world’ relied heavily on the practical, technical and aesthetic craft of the design elements.

The absence of period-correct locations, carriages, boats and dressing available in New Zealand, required we build the majority of the settings, including part of the three-masted barque, the GODSPEED. We built the exterior of the ship, quay and wharf set, including a customs yard. The water element was added digitally in post-production. We also built Victorian-era streets, a rural township and numerous cottages, hotels and dwellings.

Each project has its defined parameters and the many challenges of filmmaking afford the opportunity to refine and prioritize ideas and develop an intimate focus and intentional approach to the design. Experience has shown me that the greatest obstacles often produce the most innovative creative expression. 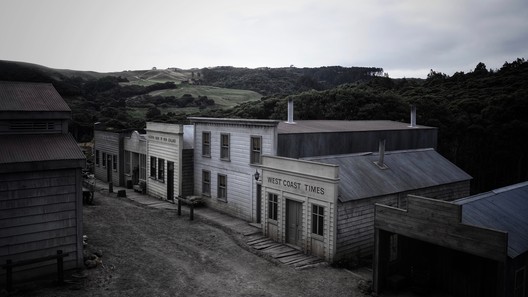