Kéré Architecture has unveiled first images of its proposal for the Benin National Assembly. Located in Porto-Novo, in the Republic of Benin, the Parliament House has been commissioned by the Ministry of Living Environment and Sustainable Development, and has been in the design phase from 2018 till 2020. Portraying the values of democracy and the cultural identity of the citizens, the project is set for construction in March 2021. 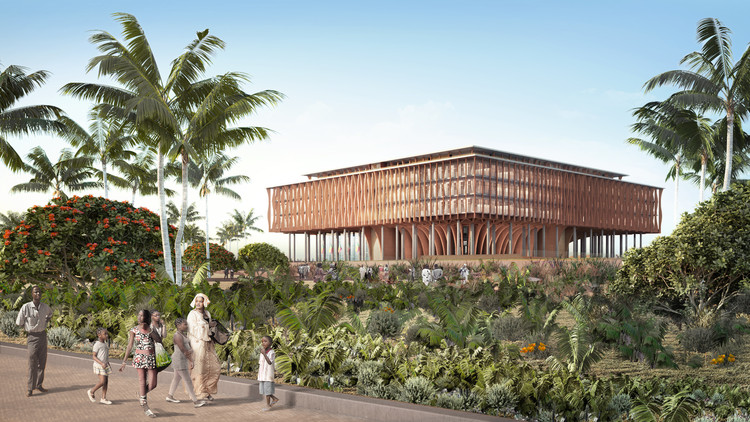 “Having outgrown its current building, which dates back to the colonial era of its past, the parliament of the Republic of Benin has entrusted Kéré Architecture to design a new national assembly”. In development since 2018, the 35 000 sqm project draws inspiration from the palaver tree, a timeless symbol, having borne witness to previous generations and inspiring respect for the majestic forces of nature. In fact, in the age-old West African tradition people used to meet under a tree to make consensual decisions in the interest of a community.

Reinterpreting these ideas, the Berlin-based office Kéré Architecture founded by Diébédo Francis Kéré, imagined an assembly hall on the ground floor supporting offices and auxiliary functions above, with a roof terrace on the top floor. Actually the ceiling created by the dynamic reach of the structure, generated a crown. Set back from the deep façade, it filters the strong sunlight. In addition, the hallow trunk of the building puts in a place a central courtyard with circulation spaces and a spiral staircase that connects the assembly hall on the ground floor to the offices above.

A large part the site forms a public park, creating an extensive recreation space for Porto-Novo. Extending to the foot of the palaver tree, creating shaded space where citizens can gather and deliberate, the public green space produces a sense of openness and transparency. Further facilities for government services are integrated into the park’s topography with planted roofs, forming a façade. Moreover, to the south of the terrain, across from the former national assembly, a public square highlights the main façade. 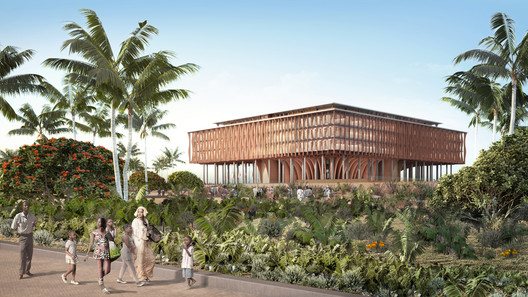