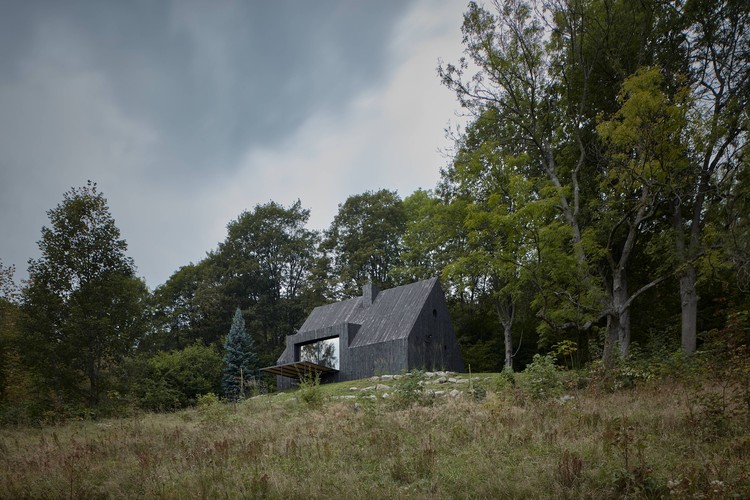 Text description provided by the architects. The winter wind blows over Buková mountain. It travels from the North Sea across the German plains and gains strength in the rocky hills above the church in Hejnice, to reach the other side of the mountains and talk about the upcoming winter there. In these places, where the cold fingers of the north winds still reach, we have repaired the cottage.

Above the valley of Horská Kamenice river, fallen beeches rustle and the wind plays a strange melody. White smoke rises from the black house and suggests that the cottage is not empty. The original face of the unfinished cottage from the eighties has changed beyond recognition. The gray brizolite was replaced by black wood paneling, which the owners tanned themselves. The wood also extends to the roof areas and the main house, even with a small cottage, looks very abstract. Terms such as roof, wall, or chimney merge into a single shape.

There is a house with windows and a terrace. Some of the windows cut the facade cladding into a round shape. The house looks like an overgrown birdhouse. The cottage is cozy. The flames of the fire lick the glass in the large fireplace, the wood cracks and pillows of white Jizera mist roll over the windows. Tufts of water vapor sweep the valley and above them white spots of slopes on Špičák. The worst weather here can actually be the best. The interior is simple and functional. The original layout has changed.

The original living space remained in place, but the sleeping layout changed. There are now two bedrooms in the house. One is large, accessible by secret stairs in the closet. The second, slightly smaller, is accessible by a ladder from the kitchen. Opposite the fireplace is an invention called the "sleeping window", where an unexpected visitor sleeps comfortably.

Fresh powder of snow crunches underfoot and we get to a smaller cottage that hosts a sauna and a bedroom for visitors. The birch halo soaks in the bucket and the sauna smells of wood. It's getting dark and in the twilight, you can see the first naked people in bathrobes who are going to taste the magic of the sauna with the best view in Jizerky. We are lucky with people.

Together with our clients, we realize things that we used to just admire in magazines. It is always a sign of courage to repair an old house because it is never entirely clear what awaits you during the work. A wall falls here, here it is found again that the house has no foundations, or there are a few bones from the Middle Ages somewhere and everything has to change. We are all happier when everything goes well. It just wants to have strong nerves and a bunch of people who trust in you. Thanks! 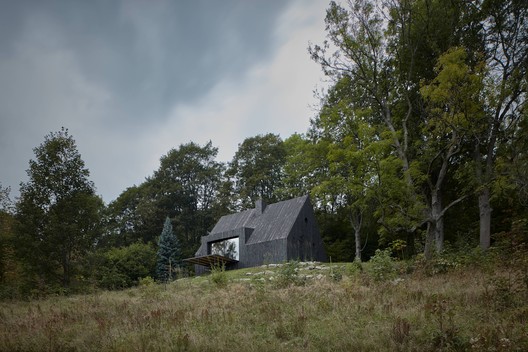