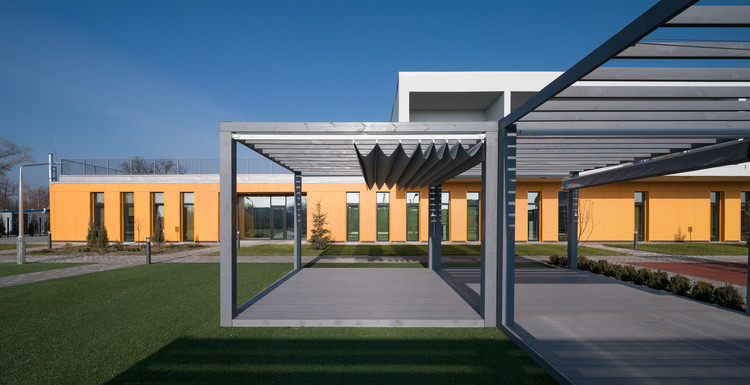 Text description provided by the architects. The project site is located in the small village of Obukhivka near the city of Dnipro. The existing buildings is low-rise, chaotic and stylistically disparate. The architecture of the building is designed to be a contrast to the existing context, as a kind of social experiment aimed to start a process of quality changes of the existing development

The building has a linear planning structure, which is quite unusual for buildings of this typology. But this is what allowed to place the premises of all 6 children's groups along the main facade, oriented to the south. The main idea is to create a space filled with sunlight and at the same time ensure maximum connection of the interior with the surrounding landscape.

Facade tectonics are elements of sun protection, protecting the room from overheating in summer. Due to the southern orientation, the use of solar energy is provided for reheating the premises in autumn and winter, when the sun is lower to the horizon.

Interior design is simple and functional. The main goal is to create an unpretentious background for the color and emotionally bright children's world. In our deep conviction, it is children who serve as the main compositional accents in such an environment.

The building was ordered by a local community and financed by the regional government. Therefore, there were many bureaucratic obstacles in the realization of the plan. For the realities of Ukraine, the project was experimental, since it had a significant number of deviations from the building codes and requirements that were outdated since Soviet times. The project team, including the representatives of the Customer, had to exert certain superfluous efforts in coordinating design solutions in various instances.

The structural basis of the building is made of monolithic reinforced concrete. Large area of stained glass with orientation to the south to maximally fill the rooms of children's cells with sunlight. Facade tectonics are elements of sun protection, protecting the room from overheating in summer. Due to the southern orientation, the use of solar energy is provided for reheating the premises in autumn and winter, when the sun is lower to the horizon.

In addition, solar panels on the roof provide more than half of the building's annual electricity needs. The budget for the sale of the building was within 1000 €/m2. 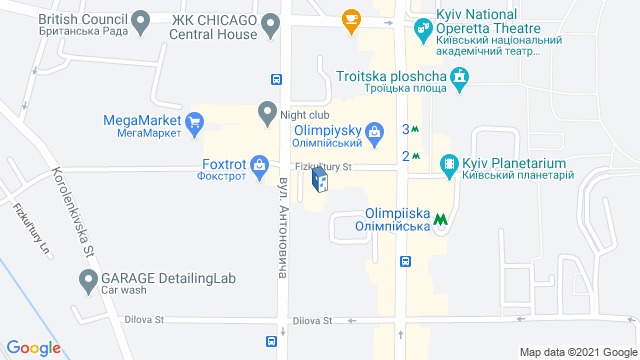