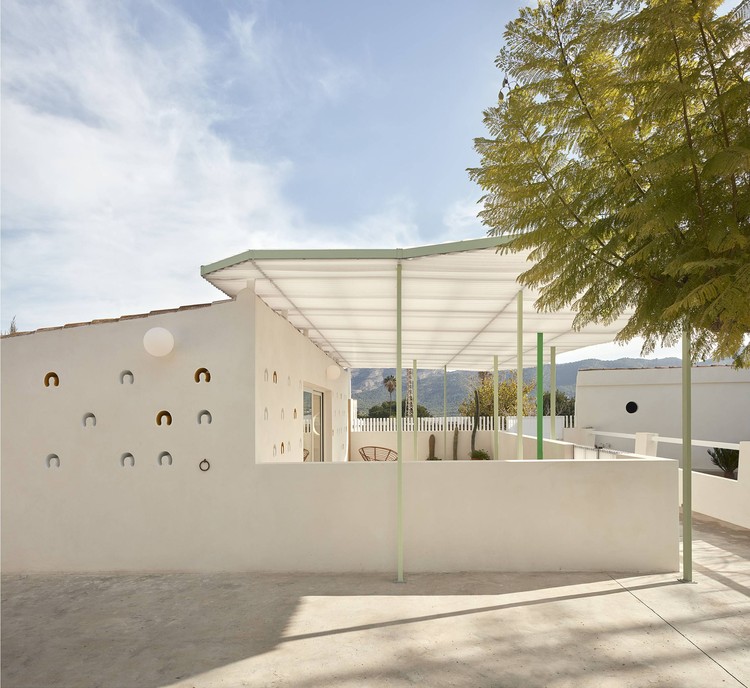 "...A place of care..." A renovation of some old horse stables turned into a temporary retreat for a photographer and his large animals. We are looking for a place without a concrete definition. Just a space to look at the animals in the field, to work on photographs, and cook rice. This place, loaded with symbolism and history, should be a place to contemplate what never should be lost. "We were looking for a space that spoke of what it used to be and not what it is".

The elements we worked with were “steps” and “tracks”. Marked footprints that do not disappear. In this case, we physically had these used and worn footprints: The horseshoes. The essential concept of the renovation is a piece protected by a “synthetic tree” that covers, provides shade and recreates a small forest. To begin, we emptied the longitudinal nave of approximately 11 x 4 meters. We maintained its concrete block walls and roof. Towards the outside, we cleared nearby buildings to look for the hidden mountain (Serra Gelada).

After emptying the volume, we opened a large hole at one end that faces the field of the animals. Between the room and the field, we created a yellow courtyard with openings that frame the animals. The façade varies according to the orientation and the uses, south and west. The existing wall has been drilled with a rhythm of horseshoe-shaped holes through which light passes where the kitchen, living room, dining room and bedroom are located. Those entrances in a lattice speak directly of the building's past, "...the footprints ascend and become light...".

Towards the east: A Yellow English courtyard and openings that look out over the fields. Towards the north: Circular ventilation holes that will act as backlit lights. For the interior, we were looking for a diverse and open space that contains the essentials for living: a kitchen, a bathroom, a bed, a table, a sofa. A "mechanism" of a single piece of pinewood that runs along the perimeter and is transformed according to different uses that emerge. It is the only space in which the wooden elements themselves divide the space by its uses.

In less than 40 m2 we obtain a kitchen, a dining table, a mobile sofa, a bathroom, a desk with a bench, a double bed next to the horse fields and a gallery to display the photography. Originally, the stables had a small roof anchored to the main facade. We reuse it by raising it above the main nave, supporting it by a “forest of delicate pillars” with no apparent logical order. The idea is to recreate a “synthetic tree” made of polycarbonate that grows and deforms, reacting to the spaces it must protect and culminating in a great expansion that becomes the new shelter for the animals. The result is a lightweight piece, which lets the light pass through the two layers of polycarbonate, which provides shade and which allows the air to circulate and refresh the entrance porch.