Blank Space has announced the winners of the second annual Outer Space competition. The competition asked architects and designers to leverage real scientific advances in robotics, AI, rocketry and autonomous spacecraft to create visions for the near future in outer space.The competition attracted thousands of participants, with winning entries showcasing narratives and images of architecture beyond the planet Earth. 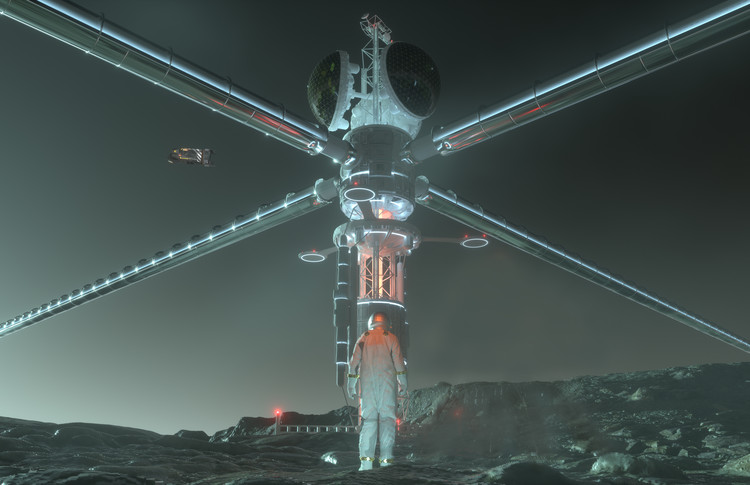 First Place goes to Wei Wu & Zhenyu Yang. “Oracle" is a story about existence. We envisage a prosperous future world of energy and material, where people no longer need to engage in any productive labor, where productivity is completely liberated. The institutionalized social structure completely ceases to exist, and each individual is no longer restricted by the site and gains complete "freedom." What people's life state would be like under this premise? Are there other "purposes" that drive us to live meaningfully in the absence of work, consumption, and other regular social activities? Since these questions are so grand and ultimate, we simply describe one particular situation in our narrative - a story of love, faith, and dreams, a story that seems like it will happen in the distant future, but in fact is not too far away from any of us.”

Second Prize goes to Thanat Prathnadi & Joana Vilaça. “The unregulated growth of the space industry could have real implications for Earth and its orbit regarding satellite congestion, geo-political conflict, the exploitation of resources for materials and energy and other environmental concerns. By speculating on future scenarios concerning the unregulated releases of satellites, we imagine “Node 1” as a self-sustained agency for all space activities, dealing with complex systems such as earth observation missions, big data storage in space and asteroid mining. In this scenario, Node 1 will eventually substitute all earth-based spacecraft manufacturing and launching, challenging the negative physical impacts of the Anthropocene towards Earth and its resources.”

Third Prize goes to Therese Leick and Wilhelm Scheruebl of TAB collective. “When one thinks of Outerspace, visions of new developments in future technologies, the accompanying euphoria and the discovery of exciting worlds immediately come to mind. But a few seconds from illusions of unlimited possibilities, the whole thing has a nasty aftertaste - why are we so eager to discover a new planet like Earth, and what that actually means for our world? Our story deals exactly with this topic. In a subtle and poetic way, the necessity of the garbage men in the universe indicates the decay of our current planet and mankind.”

The winners were chosen by a jury of leading architects, designers and scientists, including Anastasia Prosina (Stellar Amenities), Fred Scharmen (Working Group on Adaptive Systems), and Katherine Guimapang (Archinect), among many other distinguished judges.

The winning entries and other top entries will be published in a limited edition book in 2021, which is currently available for pre-order.