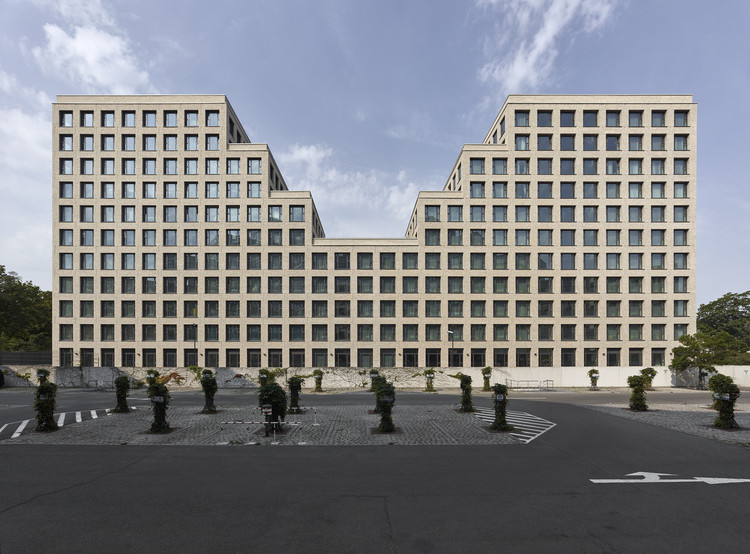 Text description provided by the architects. Viewed from a distance – from the Berlin Ring or the city motorway – the new building and its hitherto solitary neighbouring building by architect Jürgen Sawade merge to form a striking ensemble at the entrance to the rapidly developing new Berlin quarters “Schöneberger Linse“ and “EUREF-Campus”. The new building, commissioned by Werdauer Weg 3 Immobilien Projektentwicklungs GmbH & Co. KG combines offices and hotel space, which has now been occupied by the users – Debeka-Berlin and hotel brand “the niu”. The hotel and office building in Berlin’s Schöneberg district is conceived as an architectural sister building to “Platinum” the office high-rise by architect Jürgen Sawade.

As a complementarily developed figure, it picks up on the cascading of the neighbouring building and reverses its movement from the exterior to the interior so to speak. The structure forms two symmetrically arranged high points, one north of the Werdauer Weg and one to the south. From a common five-story base, they are each staggered upwards in two-storey steps to a height of 11 storeys – analogous to the “Platinum” building. The new building retroactively embeds the previously context-free building from the 1990s into the urban fabric.

Together, the two buildings form an urban ensemble whose lenticular floor plan reflects the structure of the neighbouring urban development area of the “Schöneberger Linse”. Its west-facing silhouette frees the adjacent New Twelve Apostles’ churchyard with its chapel by Paul Egeling, which is listed as a historic monument, from its backyard situation and gives it a new urban presence. The uniformly light brick façade strengthens the sculptural character of the new building. With its cream-beige colouring, it refers back to the granite of the “Platinum” building. In its materiality, it also ties in with the brick of the neighbouring monument. Windows evenly distributed over the surface create an abstract façade image as a web of vertical and horizontal lines.

The plasticity of the building’s exterior, conceived as a relief, develops from the details. The details are not ornamental, but arise from their structural function. Window openings cut deeply into the wall lend the façade a depth that creates a changing play of light and shadow. The cladding necessary to conceal the expansion joints results in subtle recesses in the wall at the interfaces between vertical and horizontal bands. In their regular repetition, they become a further structuring element in the relief of the façade, recalling the aesthetic use of wall cramps or bossage. The two occupants of the new building benefit from its well-connected location between two central train stations: the southern section is home to the national headquarters of Debeka-Berlin, while the northern section houses a hotel by the company “the niu” with almost 300 rooms. 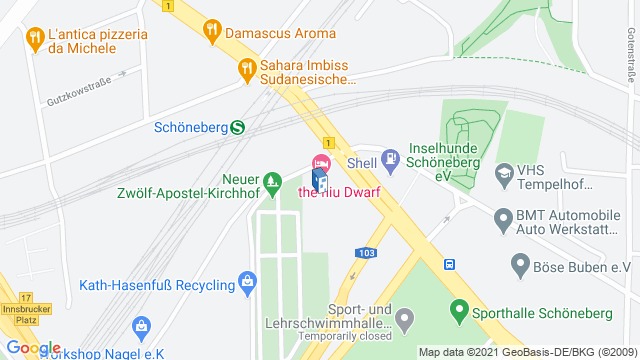 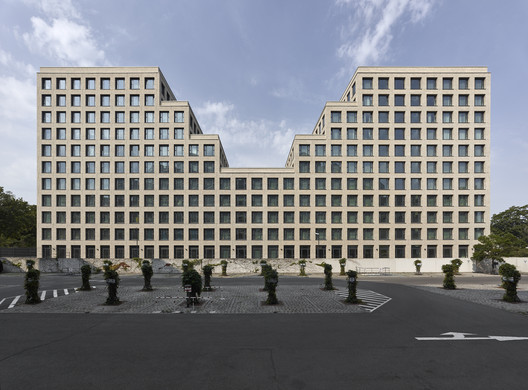