Save
Foster + Partners Unveils Lusail Towers in Qatar, a Landmark Project for a New Central Business District in the City
Share
Or
Copy

Foster + Partners has revealed its latest project for Qatar, a 1.1 million-square-meter landmark development consisting of four high-rise buildings. Part of a larger masterplan also designed by the architects, to be completed ahead of the 2022 Football World Cup in Qatar, Lusail Towers is envisioned as a “catalyst for a new central business district in the city”.

Creating a new downtown district that is sensitive to climate and linked to a new transportation hub, Foster + Partners unveiled Lusail Towers, a development of four high-rises for Qatar. The project that puts in place two towers at 70 stories, and two at 50-stories-high, arranged symmetrically around a central plaza, will host the headquarters for the Qatar National Bank, Qatar Central Bank, and Qatar Investment Authority alongside several other global organizations including Qatari Diar.

Located at the end of the grand boulevard that links the new football stadium to the corniche, the development is part of the Foster + Partners masterplan for the city. Designed in response to the climate, the integrated design assisted by technological tools generated an “intimate human-scale streetscape while responding to the city on an urban scale”. At the base, several podium buildings surround each tower, with shops, cafes, and restaurants that help animate the public realm. Moreover, the clad in marine-grade aluminum glazing of the facades shade the interior spaces from the harsh sun, while preserving views out and daylight.

The complexity of the project and the compressed timescales meant that the exchange of information between architects, engineers and other consultants needed to be almost instantaneous. From the outset, we established an innovative approach by creating a single platform that communicated design changes in real-time, enabling our integrated team work cohesively and at speed. -- Luke Fox, Head of Studio, Foster + Partners.

The team at Foster + Partners developed an in-house software system called ‘Hermes’ that coordinates design data for the project and facilitates the sharing of this data in real-time. On that note, Adam Davis, Partner in the Applied Research and Development team at Foster + Partners stated that “One of the most valuable contributions Hermes has made to our design process is to eliminate the need to manually rebuild models for different purposes. It allows us to work seamlessly across disciplines, facilitating prompt discussions between all the relevant individuals”.

The elliptical footprints of the towers morph through 90-degrees as they rise up, gently shifting the viewing axis outward and offering stunning views of the surrounding city and waterfront. The structure remains symmetrical in plan through this morph, and comprises a central concrete core surrounded by sixteen inclined columns around the perimeter, to create the unique geometry of the design. Wind tunnel tests were carried out early in the design process to inform the optimization of the structure. -- Roger Ridsdill Smith, Head of Structural Engineering at Foster + Partner.

“Environmental design was a key driver in the design”, states Piers Heath, Head of Environmental Engineering, Foster + Partners. In fact, he adds that “The morphing form was based on numerous studies and options with the aim of limiting solar exposure. The twisting shading fins were then developed to offer an optimal outer solar shade, along with an inherent reduction in exposed glazing. Targeting 4 stars in the regional Global Sustainability Assessment System (GSAS), the Lusail towers include active systems design including centralized thermal storage using innovative phase change materials, high-pressure hydronic systems, demand-controlled ventilation, efficient LED lighting, and advanced automation controls. In addition, molded concrete panels give the buildings a high thermal mass, with minimal punched windows that reduce the amount of solar heat to the interior spaces. 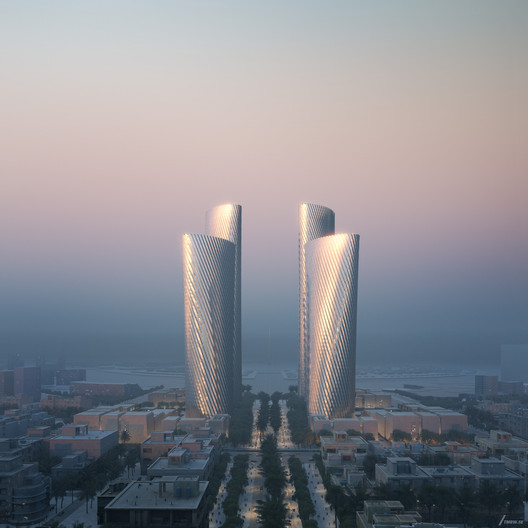