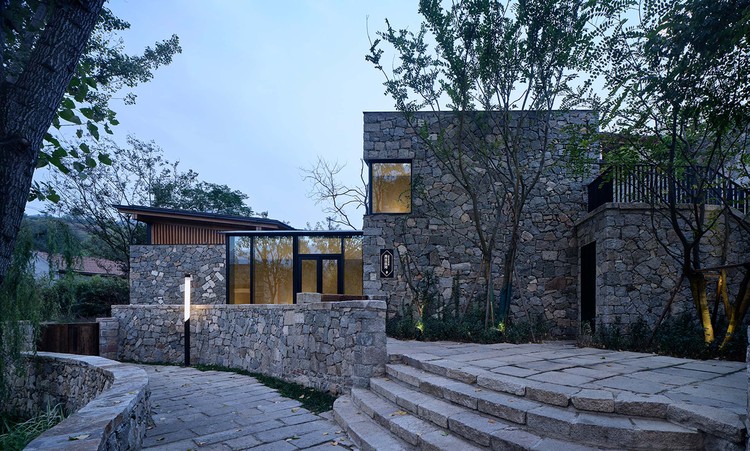 Text description provided by the architects. The site is a typical sloping village with dense vegetation. A small river runs through it and reaches the top of the village, commanding the magnificent scenery of Mount Tai in the distance. When the project started, there were no villagers living on the site, leaving only a dozen groups of stone houses, some broken stone walls and a small number of production houses that had been used as pigsties, some newly built and some years old.

Facing multiple challenges-How to make effective use of stock housing land and collective construction land? How to attract traffic in poverty-stricken villages, produce benefit, and make it develop sustainably? We propose a double-line parallel design strategy. The first is to carry out acupuncture-style renovation. With the homestead boundary unchanged, the space activation of the existing buildings and the ecological restoration of the original environment are taken as the starting point to realize the renewal of the old villages. The second is to stimulate the media effect for attracting traffic through the establishment of public space. The existing homestead in the site will be transformed and updated into a resort hotel, and a group of public buildings with media effect will be built by using a small amount of collective construction land indicators, while giving consideration to public supporting facilities of the hotel.

One is the "new" function versus the "old" site. How to achieve a breakthrough in internal functions while retaining the texture of the original village, so as to meet the needs of "new" guest rooms?Second, "new" requirements and "old" construction. How does the design take these construction factors into account to ensure the completion and design quality of the building? Third, "new" architecture and "old" tradition. How should architects continue the overall style when facing the formal context of traditional architecture in the context of modern architectural culture? How should architects reflect the contemporary era in the face of new space requirements and material conditions?

The traditional stone walls left over from the old buildings in Dongximen Village are the result of the skilled craftsmanship of the stone craftsmen in the village. The big problem of design was what to do with the stone walls. At the early stage of the design, the stone houses and walls on the site were carefully mapped, and the parts with good quality were selected for annotation and reservation. The stone walls that could not be retained due to quality problems were also stacked and stored and rebuilt in their original position. We regard these old stone walls as an important basis for "anchoring" the new building, so that the new and the old naturally have a kind of continuity and inheritance.

In the design, the load-bearing effect of the original stone wall is removed and transformed into the envelope structure. In this way, the original load-bearing stone wall is free in form and can fully display the material itself. Block walls are added to the inside of the stone wall. The insulation layer, waterproof layer and protective layer are successively added between the block wall and the rubble stone to improve the thermal performance of the new building and ensure that the new building meets the requirements of modern use.

The new building takes the form of a steel frame inserted into the old rubble walls. After carefully considering the construction conditions of the site, we chose the most common building materials I-beam as the main building materials. Beam and column are made of 200x200 I-beam, purlin is made of 100x148 I-beam, easy to purchase and process on site. At the same time in the design we carefully designed the frame combination and material connection. The frame of the main body is rigidly connected, and the purlin is overlapped with the main frame.

This framework system can flexibly adopt the line-shaped, L-shaped and U-shaped layouts according to different homesteads, which can well respond to the complex homestead and site features. The frame of small scale became a corridor; the frame of large scale became a room. This way of generating individual volume from prototype framework and then growing into whole is completely consistent with the formation mode of traditional settlements. This frame system has also achieved very good results in the construction process. The clear and simple structural system not only saves the cost, but also allows the construction personnel to accurately understand the designer's intention, and minimizes the space for making mistakes in the field construction.

The specific strategies of the twelve courtyards are as follows:
#1, #2 and #4 Courtyards: The existing buildings on the site are recently built stone houses. The design preserves part of the rubble stone wall and combed the relationship between the building and the site. #1 courtyard has a tree, around which the building forms an inner courtyard. #2 and # 4 courtyards form L-shaped enclosed courtyards.

# 3 Courtyard: The existing stone houses of smaller size were auxiliary houses used for the storage and production regarding the old dwellings. The design takes advantage of the existing rubble stone volumes, and inserts glass box connections between them. Each stone box contains functions such as toilet and bedroom, while the glass box is a shared space for children to play games. Inside and outside, large and small, real and virtual, closed and open here have formed the sharp contrast.

# 5 Courtyard: The original building has two parts, which are arranged in parallel to the north and south. The south part is a new stone house for farmers in long shape, which is too long, rigid in shape and stiff in combination with the terrain. We broke up the old volume into two parts. The west side retains the line-shaped layout, forming two guest rooms. On the east side, the vertical volume is placed in combination with the terrain. The public space serving the guest rooms is built on the ground floor, and the large steps are set in the interior according to the height difference trend, making the interior space with rich levels and varied functions. The north side of the original building is the old residential buildings, the old building is L-shaped layout, our design retains this spatial pattern, forming L-shaped courtyard.

# 6 Courtyard: is a newly built building in recent years. This location is close to the main road up the hill, and its function is defined as the meeting and gathering space of the B&B. Considering the difference of functions and hoping to make difference from the traditional sloping roof in the situation strategy. We use the metal aluminum plate as the material and take "folding" as the design concept. The wall, roof and slabs are integrated with the steps to resolve the height difference of the site. The whole building surface presents a light and thin origami effect, coupled with the fully opened corner of the structure, which further eliminates the sense of weight of the building. It contrasts with the heavy guestroom architecture in a heterogeneous manner.

#7, #8 and # 9 Courtyards: The original buildings were old dwellings with enclosed layout. The new building complies with the old architectural texture and spatial form. It is enclosed on three sides, adding or reducing the volume in the original spatial logic, and forming a courtyard space with indoor and outdoor fusion and height difference. Among them, the ancient trees on the base of # 8 Courtyard are kept intact, and the architectural framework is flexibly spread around it. In between, an external courtyard sheltered by trees and an internal space integrated with functions is formed.

# 10 Courtyard: Originally it is a newly built L-shaped layout building. The design complies with the original spatial pattern, using the same L-shaped enclosed courtyard as the # Courtyard, creating a step-up entrance along the terrain, forming an outdoor platform higher than the slope, which is not blocked by any line of sight and directly communicates with the distant mountains.

# 11 Courtyard: The original building is newly built in recent years. There is a height difference of three meters between the north and south layouts. The design complies with the spatial layout of the original building and mediates the difference in visual elevation between the front and rear buildings. The local roof is enlarged to add a shared public grey space and a roof terrace, which increases the richness of the space.

# 12 Courtyard is located on the westernmost side of the whole site. Considering its relatively independent geographical location, we position it as the highest-end single-family guest room of the B&B. The existing buildings on the site are old dwellings, which are in dilapidated condition. The new building retains the original stone walls and is embedded in a double pitched steel roof volume on the second floor. The sloping roofing is simplified by the extensive use of flat cement tiles, but at the same time interpreted with modern materials and processes. The connection between roof tile and cornice adopts metal closure, which improves the delicate sense of design, and also reduces various tile roof decoration accessories, and reduces the cost.

The simple glass interface of the building contrasts with the harsh rubble walls, while the eaves and floors are edged with fine aluminum profiles. Together with the warm-colored bamboo and wood wall panels under the eaves, it is aimed to create a new contemporary aesthetic of rustic yet refined countryside. In the end, unlike other courtyards anchored to the earth with stone texture, # 12 Courtyard has a large L-shaped corner gray space on the second floor, which integrates with the original trees in the environment, allowing visitors to have a direct dialogue with nature. 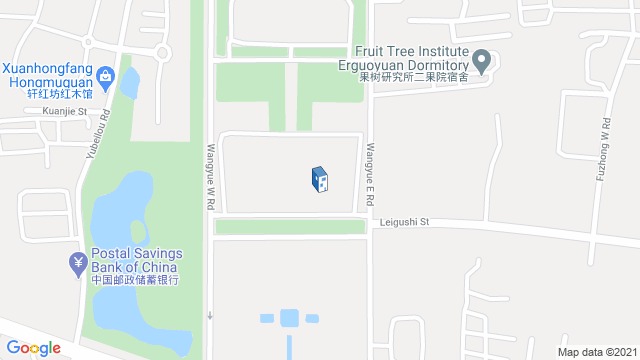 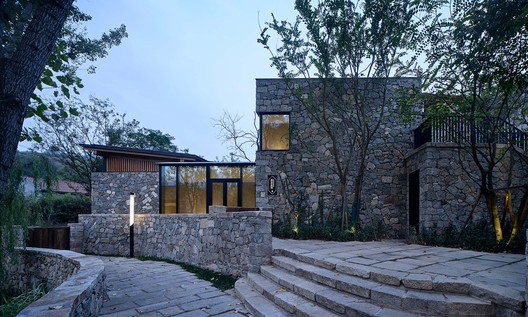