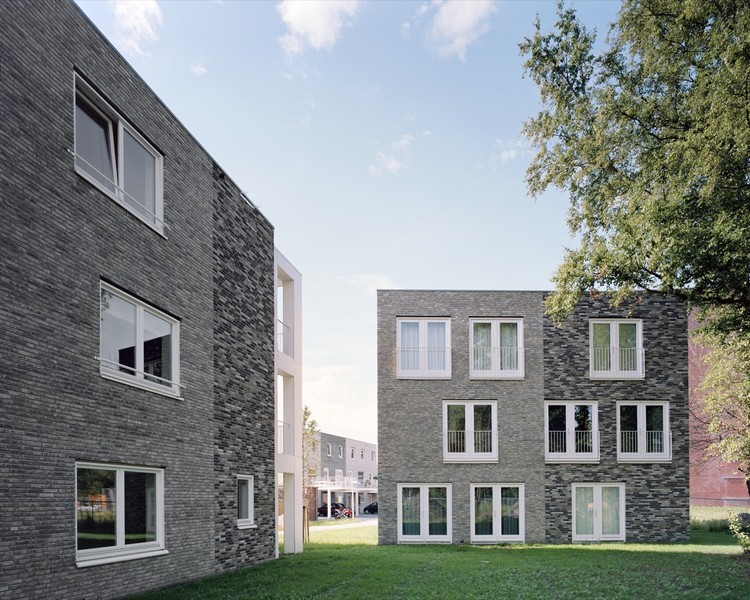 Text description provided by the architects. The family homes and apartment blocks designed by pvanb architects display brick architecture applied with great care and craftsmanship. They form a tangible translation of the varied residential programme, and continue the brick tradition of the pre-war and post-war tradition in an individual way with simple resources.

The new construction on the Bonairestraat represents the first phase of the restructuring of a block with obsolete architecture from the post-war reconstruction period. It lies in the so-called ‘Indische buurt’, at the interface of the pre-war and post-war city. In the street, the existing uniform residential programme has been replaced by two rows of single-family homes bearing a discount buy-back guarantee, which makes them ideally suited to starters on the housing market. Two compact apartment blocks stand on the inner courtyard behind these, each with six apartments for young people with an autism indication. These homes are reasonably sheltered from the street and other public space. The expressive exterior façades of the row houses and apartments are clearly akin, but nevertheless visualize the specific residential programme and the specific assignment issuing from their programme.

The design solution adheres closely but naturally to both the urban planning assignment and the architectonic requirements of the context. The row housing and apartments are clearly anchored in their surroundings, but simultaneously form an enrichment of the traditional sober but refined brick buildings of the working-class neighbourhood. The main intention of the existing block has been retained and reinforced. To support the programme, an extra ‘incision’ has been made in the construction on the Bonairestraat, thus making the previously closed off inner area more accessible. The situation, form and elaboration of the row housing create a fluent transition to the semi-public inner courtyard which offers protection without being hermetically closed off from the neighbourhood and public life.

The urban plan is supported by careful materialization and detailing, which make the distinction between the street and the inner courtyard convincingly tangible despite the block being opened up. The three-storey family homes have been divided into urban houses with a carport that also serves as a roof garden, and row-housing with a garden and storage area. However, the front façades of both rows have been taken as a single continuous wall, which is accentuated by a light over-measure in relation to the volume. The consequent dynamically designed wall consists of an extensive palette of brick patterns and variations in bonds, which produces a surprising visual wealth whereas only one colour of yellow- green brick has been used. The end and rear façades have been implemented in two shades of grey, just like the adjoining roofs. The soft grey tints bring a tranquil atmosphere to the landscaped inner courtyard which emphasizes the uniquely crafted apartment blocks. The brick architecture, applied with great care and expertise, literally articulated in the brickwork, thus forms a tangible translation of the varied residential programme. It continues the brick tradition of the pre-war and post-war context of the neighbourhood in an individual manner with simple resources.