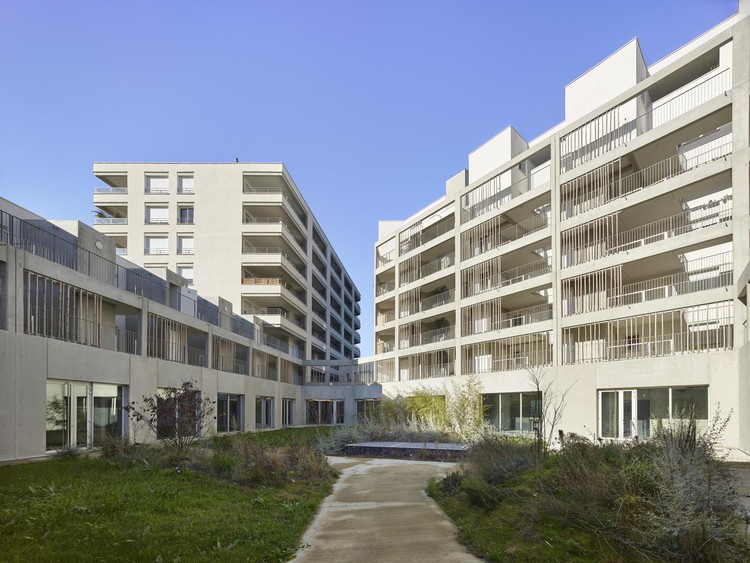 Text description provided by the architects. The ZAC Andromède is an urban development zone situated between the cities of Blagnac and Beauzelle that will accommodate new residential neighbourhoods as well as activities with high landscape and environmental value. More than just an extension of Blagnac and Beauzelle, Andromède can be considered to be a new type of peripheral neighbourhood in the Toulouse urban area.

Parcel 19A enjoys a highly visible corner location facing expansive open spaces. Looking out towards the forecourt of the Saint-Exupéry high school and the Cours Barricou, the project presents an assertive angle and a tapered geometry resulting from the shape of the lot. Its façades respond to a multitude of urban contexts, including the school forecourt, a park, the rear façade of the school, existing row houses, and a neighbouring parcel.

The multifamily residence is situated at the corner of the boulevard Alain Savary and the forecourt of the Saint-Exupéry high school, which it faces. Rising eight floors in height, the building looks out over the surrounding open spaces. As it turns to face the boulevard, with long views over an urban park, the scale of the building changes to match the sequence of six-story buildings planned along the boulevard Alain Savary. Around the back, the building descends to a 3- to 2-story scale before giving way to a series of townhouses, also 3 or 2 stories, and ending in a row of 2-story houses that match the predominant typology of the inner residential streets on subsequent blocks.

The main building’s ground-floor base is given over to activities catering to the public, organized around an interior patio. These activities together form Sporting, a fitness-oriented zone also offering restaurant services and more. On the upper floors, 106 residential units are allocated between three buildings sit atop the base and accessed via exterior walkways overlooking the patio. This layout seeks to take advantage of the different orientations and distinctive views offered by the corner location while breaking down the reading of the volume in a simple way. The building does not present a true front or rear façade, but rather a system of façades rotating around an interior distribution space.

The rest of the parcel is occupied by 16 houses, including 7 with gardens facing the interior of the parcel and 9 with access courts providing a buffer and a degree of intimacy with respect to the street. The base that contains the Sporting, and the residential units superposed above, are treated as a single, identifiable, structuring volume. The transition toward the lower scale of the townhouses and the existing and new construction on surrounding lots begins with a south wing that descends to a scale with a ground floor plus 1 or 2 upper levels.

This wing consists of duplex townhouses, whose terrace, master suite, and exterior storage space—in keeping with the strong typological intention of the project—read as an extension of the volume of the multifamily building, creating a transition between collective and individual living. The townhouses are accessed by an exterior walkway from the shared entrance hall, but apart from their shared walls, they are not a collective typology. The composition of this 3-story wing is primarily intended to offer exterior living space to each unit while addressing the issues associated with occupiable roofs—allowing for storage, outdoor furniture, and all the other amenities of daily life—through the concealing effect of a pergola and screen wall. These elements also allow for the architectural integration of the roof access stair.

The townhouses are set back from the residential lanes, with a 2-meter-high (6’-6”) boundary wall consisting of concrete block laid in a lattice pattern and equipped with gates for pedestrian access. Variations between solid and latticed portions of the wall create a kinetic effect that creates a degree of privacy at the ground floor level of each house while also allowing occasional glimpses of the street that create visual interest for passing pedestrians.

By its form and materials, the project as a whole seeks to project a strong and unified image. Collective housing, individual townhouses, and street-facing boundary walls make use of a single vocabulary. All of the façades are clad in white concrete bricks, a material whose carefully controlled workmanship, durability, and aesthetic appearance are in keeping with the ambitions of the project. The loggias of the collective building are given a degree of privacy not only by their height with respect to the ground level but also by a partial-height masonry parapet below the glass guardrail. The ground floor of the multifamily building is smoothly finished prefabricated concrete.

A series of accessory spaces surround the ground-floor Sporting facility. These include pool and balneotherapy facilities that extend to the outdoors. The surrounding open spaces are planted with trees and greenery up to the concrete brick boundary wall. The interior patio is organized around three islands planted with giant bamboo, allowing the activity rooms and circulation areas to spill out onto this central space of the Sporting facility. 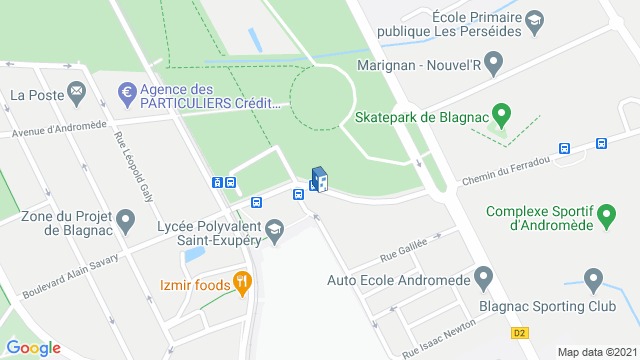