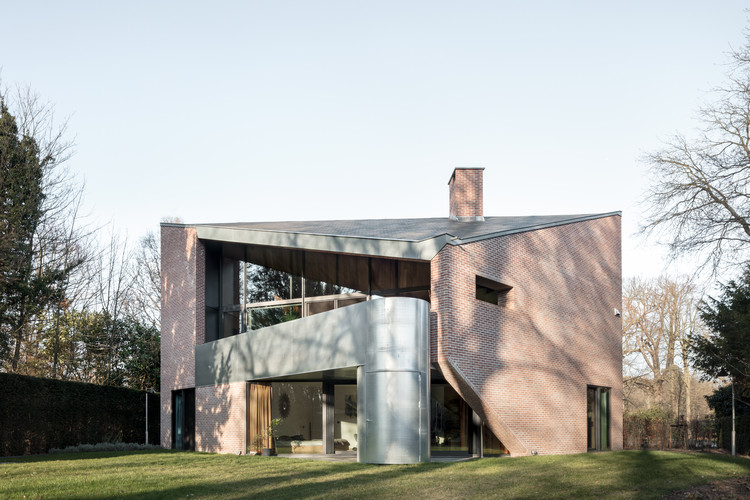 Text description provided by the architects. The house is located directly opposite the Horst Chapel in Schoten (B), on a site that once accommodated the 19th century rectory of the chapel. The property formed a part of the Vordenstein Castle domain and was one of the last remains of a place of pilgrimage originating in the 15th century. The Horst Chapel and the entire adjacent Vordenstein domain are of historical interest, both culturally and in terms of landscape.

The volume of the original rectory was used as the point of departure for this design. The width of the front facade, height of the eaves, and angle of the roof are the same. The basic form is folded open into a pentagonal floor plan with two right angles. The outer walls, with elongated frameless windows, are oriented toward anchor points in the historical surroundings.

A spiral staircase leads up from the entrance to the living spaces on the first floor. The rear facade is entirely cut away and opens out onto a large terrace. An other spiral staircase, in a tubular steel casing, connects the terrace with the garden.

The house was constructed close to the street, in parallel with the building line of the chapel. By way of this visual narrowing, the gateway effect of the former hamlet and place of pilgrimage ‘Den Horst’ is strengthened once more. The choice of materials refers back to the fundamental architecture typical in this region at the time - traditional materials such as red brick and natural slate, which are also to be found in the chapel.

The layout, with the sleeping areas on the ground floor and the living space on the floor above, is atypical but has certain advantages. This way the bedrooms remain cool and everyone has direct access to the garden. On the upper floor, there is a lot of room under the pitched roof. A mezzanine was placed in the apex of the roof, with a more intimate sitting area underneath it. The partially covered terrace that is connected to the living space offers an expansive view of the nature reserve that lies behind the home. 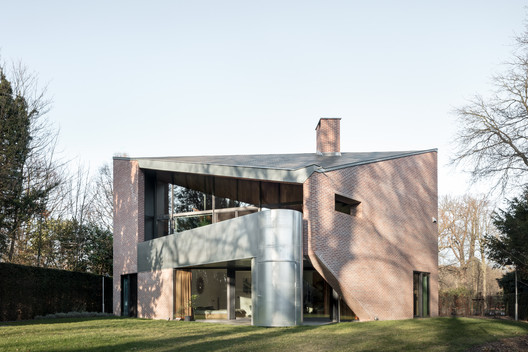