✕
Save
The Thompson Center: A Building Facing Demolition Threat in Chicago
Share
Or
Copy

Unusually shaped and brightly clad in multi-colored glass panels this structure occupies the entire city block and sits tightly across the street from the City Hall in Chicago’s central Loop area. Walking around it on three sides will not reveal anything remarkable but come to the intersection of W Randolph and N Clark streets, the southeast corner, and you will be knocked your feet off by sweeping three tiers of conically curved and angled setbacks. This surprising move generously freed up pricey urban land for triangular public plaza. There are trees, benches, childlike colossal sculpture Monument with Standing Beast (fiberglass, 1984) by Jean Dubuffet, and multiple options for shortcuts and rare vantage points in the heart of the dense metropolis.

The glass and steel building may be nicknamed a starship for its futuristic shape that seems to have landed out of space in the shadows of Miesian boxes around it. But according to its creator, Chicago’s most charismatic living architect, German-born Helmut Jahn, it is a symbolic structure, a contemporary take on the traditional state capitol, a domed government building. Topped with a sliced-off cylindrical crown the Center projects its iconic silhouette on the city’s skyline and serves as a central skylight over the immense, 17-story, 160-foot-diameter rotunda below. Entering this high-tech cathedral-like kaleidoscopic space is nothing short of breathtaking. It is invigorated by moving escalators and glass-enclosed elevators, constantly shifting sunlight and shadows, and streams of people that come here for all sorts of reasons – meeting with bureaucrats, taking Chicago Transit Authority trains, grabbing fast food at the basement-level cafeteria, and simply to pause and enjoy the exhilarating energy of the place itself.

Dormitories Built by Louis Kahn, Part of the Indian Institute of Management in Ahmedabad, Set to be Demolished

The whole building is hollowed out to celebrate the centrality and transparency of government. Symbolism extends to the choice of materials – toned down red, white, and blue glass panels arranged in bands that look more like salmon, silver, and baby blue. Not everyone agrees on this color palette, but they provide the building with a peculiar character that simultaneously evokes the 1980s and contemplates the future.

Overall, the Center’s appearance is very impressive and perfectly civically minded, but when it first opened the main attention in the press was given to its performance, not the strongest side of many examples of high architecture. Most controversially, large expanses of glazing resulted in overheating in summer and cold drafts in winter. There are infamous photographs of the office workers taking refuge under beach umbrellas on hot summer days, while in winter ice would form on the interior wall panels. To correct these issues cooling towers had to be brought in. This, of course, could be avoided if originally specified curved, insulated (double paned) glass panels were installed. But they were found to be prohibitively expensive. Flat, insulated glass had been suggested instead, the solution that was dismissed by the architect as oversimplified. That led to the use of single-paned (non-insulated), curved glass panels. And so, the still utilized air conditioning system remains to be very costly to operate.

Apart from the great expense to maintain adequate internal temperature the Center shows plentiful signs of wear and tear caused by years of maintenance neglect. Additionally, limited accessibility and time of operation – the Center is open only during office hours and shut on weekends – never encouraged the public to embrace the building as a true civic space.

Perhaps the Center’s original ambition was a mismatch with its purpose from the outset. Or the government’s vision was not idealistic enough – imagine a much more resourceful program that would include a major IT company office, retail, restaurants, and why not condos and hotels to help paying for the building’s operation. That is exactly what the original architect suggested in his speculative 2015 proposal – giving the building a new life through adaptive reuse and envisioning a new 110-story tower to anchor the southwest corner.

This may be the right and ultimate prospect to save Thompson Center because in 2019, Illinois Democratic Governor Jay Robert Pritzker signed a bill to begin its sale. This initiative may lead to the building’s demolition, which would be ironic, as the Governor’s uncle Jay Pritzker (1922–99) is revered by architects around the world for his role in establishing the esteemed Pritzker Architecture Prize in 1979. The key purpose of the Prize is to “encourage and stimulate not only a greater public awareness of buildings but also inspire greater creativity within the architectural profession.”

Now Chicago architects, historians, preservationists, and activists scramble with the most credible reasons for saving this most dazzling structure in the city, although, one would think that it would be enough to simply take a peek inside to realize that we are in the presence of a true architectural marvel. But apparently, seeing does not always translate into believing, quite the opposite. Few recognize the building’s virtues; it is an uphill battle.

The adversary camp is much larger – those who tend to notice only what’s in front of them – noise, dirt, broken door here, malfunctioning elevator there, smell from the food court, too hot, too cold, too much glare, too much space wasted; their lists mention nothing about wonder, awe, aura, and magic. Thankfully, in recent years, the building was enlisted among the most endangered historic places in Illinois. Yet, the structure is not old enough to be awarded the urgent landmark status to save it from unjustified destruction. And so, as the fate of Thompson Center remains unclear, all I can think of adding here is a plea to the building itself – starship Chicago, please don’t go.

This article was originally published on STIRworld.com as "Review of Thompson Center in Chicago: the building facing demolition threat." 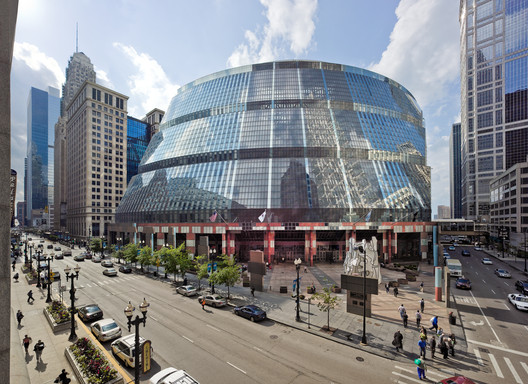