Read more
Save
House for Parents in Jeseniky / TRI.ŠTRNÁSŤ architekti 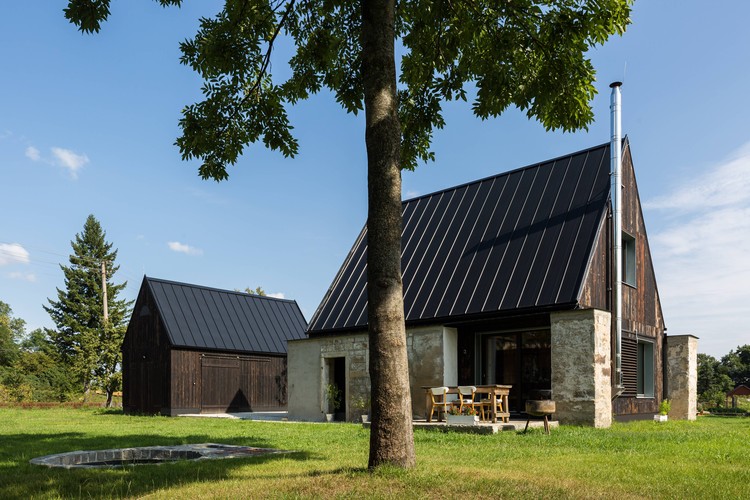 Text description provided by the architects. The plot is located in the centre of Stará Červená Voda, in the former Sudetenland in the Jeseníky Mountains. The structure of a house with agricultural facilities in the form of a barn and a stable in the back originally stood on the estate. We decided to keep the granite walls of the barn as a memorial to the great stonework of the original inhabitants. However, the detached house, which was lined with mixed masonry of marl and bricks, was already ramshackle and could not be saved. Most of the stones were not taken to a landfill, but they were recycled and used as a filler for gabion fencing.

A new wood-building detached house was placed between the original granite walls of the barn. A ventilated gap was preserved between the new and the original building, which was covered from above by plating. The construction of the house was complemented transversely by the construction of a studio / garage. Between the house and the studio, a multifunctional "square" was created, the centre of the entire plot. It is possible to dry clothes or do small do-it-yourself work, grandchildren can play here or the extended family can meet together.

Thanks to this arrangement, the two parts of the garden were connected. The garden is now functionally divided into two parts. The utility part, with raised flower beds at the back, and the residential part, with a terrace and children's pool in the front. The original varieties of fruit trees are gradually planted on the plot. Step by step, other small buildings are added to the garden, such as a shed for wood and tools, or an oven for bread.

House layout: The house is intended for an elderly couple, parents of four already adult children, who have decided to fulfill their dream of living in a house with a garden after a lifetime spent in a concrete high-rise flat. The house has no basement, one floor and an attic. The total built-up area of the house is 66 square meters. The first floor is set for parents. There is an entry foyer, a bathroom, a utility room, a living room with a dining area and a kitchen, and a bedroom. The movement limits of residents in the future are expected, so the whole floor is without any thresholds and the wheelchair for disabled people is able to turn in the bathroom.

A staircase in the entry foyer leads to the residential attic. Here is one large room that serves as a bedroom for visitors, especially for children with grandchildren. As the Ramzová ski area is located nearby, a large attic has also been designed to store skis and other sports equipment. Structure: The beam system made of KVH (solid constructional wood) lumber was assembled with only a minimum of fasteners and the structure was insulated with blown cellulose. To improve the accumulation properties, the perimeter walls were lined with unfired bricks and plastered in the interior with clay plaster.

The construction is thus diffusely open. Clay plasters have a great ability to absorb air humidity, which is then gradually released. The atmosphere in the interior is therefore very far from the atmosphere of dry air in a concrete high-rise flat. The exterior is clad with charred spruce wood. This method of facade protection originally came from Japan (shou sugi ban).

In our country, however, it has been used for several centuries mainly as a modification of the underground parts of wooden poles in fencing. The charred surface protects the wood against weather conditions, but also against fungi and microbes. The windows are wooden with insulating triple glazing and are covered with galvanized sheet metal. The roof is made of black folded sheet metal. The dominant feature of the eastern facade is also the exterior stainless-steel chimney.

The house is complemented from the south by a stone terrace, which is shaded by a textile tarpaulin. Due to the overlap of the original barn walls from the south, but also due to the sliding shading from the east, there is no danger of the building overheating. The building meets low energy standards. Heating is provided by solid fuel stove; electric heating cables serve as a secondary source. The installation of solar panels is planned in the future. 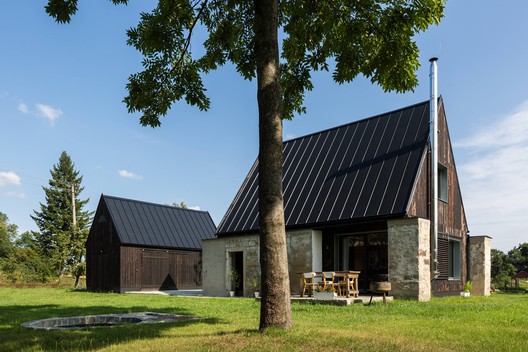