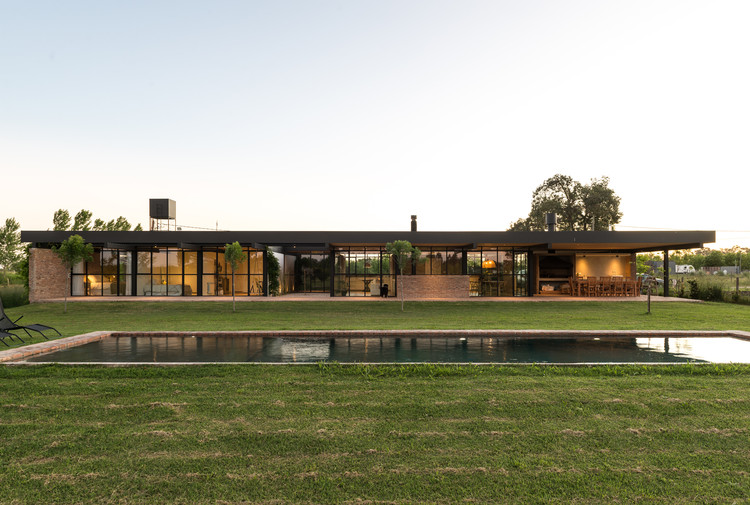 Text description provided by the architects. On a vast lot in “La Cañada” neighborhood, is located the single-family house with a longitudinal plant. Its final configuration is generated from the analysis of the conditions presented by the place itself and the clients required program.

In the previous research, different aspects essential to the resolution were revealed, such as the dimensions of the land, the restrictions agreed between neighbors and the orientation. Due to these incident factors in the housing development, we made the decision to resolve a systematic building on one floor, imposed through a module resulting from the measurements and daily uses.

The program is defined in two different axes. On one hand, in a transversal sense dividing the public and private part, articulated by a patio hierarchizing the auction of the main access of the house. On the other one, in a longitudinal direction, consolidating the service on one side and the rest of the program on the other. Simultaneously, the uses of each area resolve the materiality and the envelope in relation to the orientation, determining the control of privacy towards the street, and protecting the home from the most unfavorable winds. Regarding the quiet part of the building, the facade dematerializes, relating directly to the environment and the light, linking the bedrooms with the morning sunshine, extended as well to the west edge of the gallery, providing a situation of shelter towards the sunset. The transitional space between the background and the interior takes on a versatile role, allowing the incorporation of a “green” cover that prevents direct light in summer and the opposite in winter.

Moreover, the building, with its tectonic nature and simple and dynamic development, comprises a sequence of beams that, in addition to being part of the structural package, points out some sort of rhythm in the route, and deepens a visual directed towards the landscape itself, generating continuity and a constant dialogue between inside - outside.

The wood, the bricks and the glasses play an important role, defining the horizontal planes and the envelope. We use organic materials as protagonists, strengthening the bond with the environment and granting warmth. The synthesis of the choice and the location, conclusively complete the whole idea of the project.