Save
How Will Past Urban Experiments Shape the Cities of the Future?
Share
Or
Copy

Based on a UN projection, 55% of the world’s population lives in cities, with that number expected to increase to 68% by 2050. This percentage equates to more than 2.5 billion people, driving an immediate need for cities to accommodate more housing, create more jobs, and provide an efficient infrastructure that will support this inevitable boom. To prepare for this, we should consider urban plans of the past to understand what went wrong in order to create a better future.

The Pruitt-Igoe Housing is one of the most famous housing projects in the United States. Located in St. Louis, Missouri, it was praised for its well-intentioned goal of creating a massive affordable and efficient housing complex. Construction for the 5,800 units took place during the peak of the Jim Crow segregation laws but was completed once the Supreme Court ruled that “separate but equal” was deemed illegal. What was once planned to be two separate neighborhoods of homes, become one unified district- holding the potential to be one of the earliest symbols of racial unity in this era. However, the project was short-lived. By 1970, the only residents left were those who could no longer afford to live anywhere else, creating a massive poverty zone and 65% of units left vacant. Rents were used to fund the maintenance of Pruitt-Igoe, and with people leaving en masse, the towers fell into a state of disrepair and becoming a scene for criminal activity. Ultimately, the towers were demolished and their fall was seen as a massive failure at an attempt at an urban housing project.

From the Grassroots Up: How We Can Transform the Future of Cities One Startup at a Time

Jumping half-way across the world, it’s important to note the once most densely populated city on Earth- the Kowloon Walled City. Sitting on an area less than one-hundredth of a square mile, yet home to over 33,000 residents. The Walled City was as much of a living, breathing, and evolving organism as it was an urban development. Buried within the confines, there were no taxes, no regulations, no healthcare systems, and no enforcement of the law. It became both an epicenter of crime and gang rivalries, but also the ideal location for Hong Kong’s drug trade. The living conditions were appalling, but people continued to pile in and carve out their own spaces to contribute to this ever-evolving megalopolis. The Kowloon Walled City mirrored the Hong Kong buildings that surrounded it, building faster and taller, especially without building department or zoning code limitations. Similar to Pruitt-Igoe, Kowloon was demolished and a memorial park lives on the former site.

So what does this mean, and what can we learn from both of these housing projects? While one was planned and the other grew more organically, what led to their demise came down to two factors. The first, which dealt with their overall design, created an environment that was unhealthy and resultantly, quickly deteriorated and elevated levels of poverty. The second, and perhaps the biggest factor, was the lack of regulation in both sites. In the case of Pruitt-Igoe, while the project itself was government-funded, they left it to create its own system of maintenance and ignored the major societal shift that was occurring at the time. With continuous investment and a surrounding community and economy that supported the housing development and allowed it to flourish, perhaps the circumstances would have been different.

The cities of the future are well underway- from Masdar City in Saudi Arabia, Songdo in South Korea, and the high-tech proposals for cities and buildings that float on water, the world we are imagining is fast approaching. In order to look forward, we need to first look back and understand what went wrong so we can get the future right. 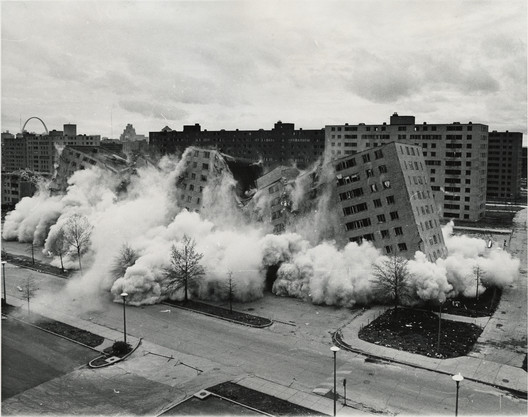