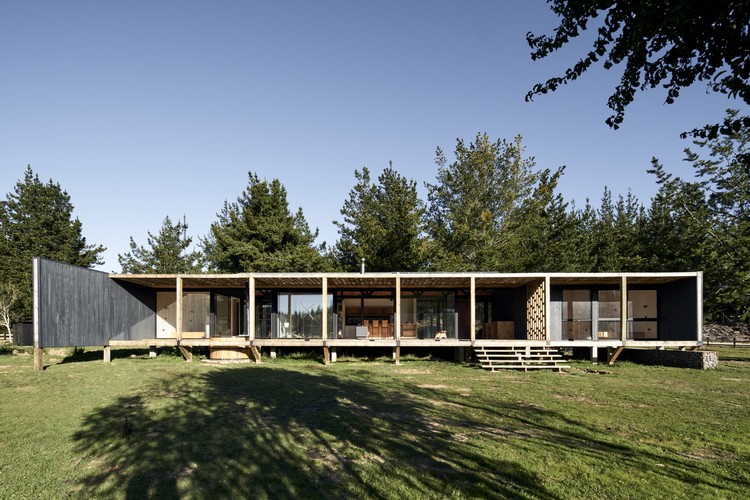 Text description provided by the architects. Casa Barra is located in the Sixth Region, on the central Chilean coast in the El Manzano sector on the way to Puertecillo. The commission consists of a vacation home for a young family for which a linear scheme is proposed, a rectangular floor plan facing north for the best sunlight and a view of the valley. The program is understood in three blocks, of which the two ends correspond to the resting areas, bedrooms for children and guests on one side, and the main bedroom on the other. Between them in the centre of the house is a space for socialising that brings together the living room, dining room, and kitchen.

A steel structure is created for this common space, achieving a multifaceted space free of pillars in which a large skylight opens towards the south. To give more privacy to the bedrooms in relation to this social and activity space, small patios are proposed as buffers. They are projected from the exterior of the house towards the interior, forming two semi-open spaces creating the barbecue area and an outdoor living room for the master bedroom. The structure of the house is fully modulated and beams and pillars are exposed defining a rhythm along the north and south facades with a character of dock-type walkways to which a series of wooden lattices are added, playing with the movement of the sun during the day.

The interior consists of a large corridor that runs from one end to the other with large windows contributing to the interior-exterior game. The project rises one meter from the natural terrain and rests on isolated concrete pillars which are accompanied longitudinally by stone gabions that are projected towards the courtyard, seeking to enhance the linearity of the house and adding presence to the terrain.