The Initiatives for Development of Armenia (IDeA) Foundation has announced the winners of the Friendship Park competition for Gyumri, Armenia. Based on results of the second round, the jury selected 19 finalists in three categories. Located in the northern part of the city, the renovated park aims to become the first modern green area for locals and tourists alike through a series of design interventions. 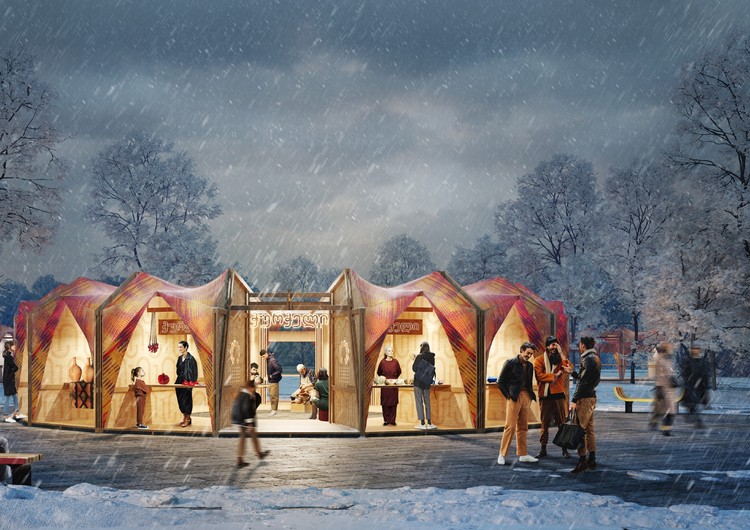 The winner in two categories at once, the Standard Architectural Element and Landmark Architectural Element, was Moscow-based team IND Architects. The architects were inspired by the "zigzag elements of traditional Armenian architecture" and used modules that can change configuration. The design becomes linear for retail or exhibitions, wavy for food courts, and circular for diverse combinations. These forms are achieved by transforming wooden structures and a patterned awning made to resemble woven Armenian carpets.

Russian-Armenian SULIMAN, RAKOVSKAYA & SOFOYAN won the Urban Furniture category. Their modern bench design takes inspiration from the "cultural code of Armenia" with supports made of heavy stone to enable visitors to sit down next to a stranger without disturbing them. On the flat front faces of the stone, people can place art or informational graphic reliefs, telling people more about this place. At the same time, the length of the bench can vary depending on the context.

The competition is a part of the integrated development of the park reflecting the city’s identity and conveying the idea of international collaboration. A total of 84 applications were received from 16 countries and 37 cities. An expert jury selected winners by online voting. The assessment criteria included the relevance of design principles, which were functionality, environmental friendliness, ergonomics and implementation. The jury also took into account compliance with the Terms of Reference, architectural appearance, cost of implementation and solutions for local identity, namely, the adaptation of modern solutions to the cultural context of Armenia.