The Harvard Graduate School of Design (Harvard GSD) will no longer refer to a private residence at 9 Ash Street in Cambridge as the “Philip Johnson Thesis House.” Moving forward, the home, designed by and inhabited by Johnson while enrolled at the Harvard GSD in the 1940s, will now be known solely by its physical street address.

The move, announced by Harvard GSD dean Sarah M. Whiting in a December 5 letter, comes days after the Johnston Study Group, a largely anonymous collective dedicated to examining Johnson’s known racism and collaborative efforts with the Nazi Party, issued a public letter to both Harvard and the Museum of Modern Art (MoMA), two institutions with deep ties to Johnson. The November 27 letter, which was initially signed by over 30 architects, designs, artists, and educators, called upon both MoMA and Harvard to strike Johnson’s name from all titles and spaces due to the architect’s “widely documented white supremacist views and activities.”

“There is a role for Johnson’s architectural work in archives and historic preservation,” the letter stated. “However, naming titles and spaces inevitably suggests that the honoree is a model for curators, administrators, students and others who participate in these institutions.”

A Tale of Two Buildings: The Argument Behind Preservation and Reuse

Among the letter’s signees were a majority of the architects and artists featured in the forthcoming MoMA exhibition, Reconstructions: Architecture and Blackness in America, including V. Mitch McEwen (also a member of the Johnson Study Group), Felecia Davis, Sekou Cooke, Emanuel Admassu, Olalekan Jeyifous, Germane Barnes, and J. Yolande Daniels. The exhibition is the first at MoMA to examine the ties between architecture and the African American and African diaspora communities.

Whiting’s letter in response, which is addressed directly to McEwen and the other members of the Johnson Study Group, opens by acknowledging that “Johnson’s global influence in architecture in the 20th century and his grip on the field even now, 15 years after his death, cannot be overstated” and that his “racism, his fascism, and his strenuous support of white supremacy have absolutely no place in design.”

Whiting goes on to elaborate that the Johnson-designed, GSD-owned home “doesn’t have an official name on record, although it is usually referred to as the Thesis House, or the Philip Johnson Thesis House, or some variation.” She adds: “But I fully agree with your strong point about the power of institutional naming, and the integrity and legitimacy it confers. And so we are taking steps to officially recognize the house within the university as simply ‘9 Ash Street’–the house’s physical address.” It’s worth noting that Johnson’s name is not physically attached to the home—or the formidable wall that shields it from the street—through a placard or other sort of signage.

Calling the name change “a minor but clarifying step in making room for other legacies to come,” Whiting concludes her letter by stating:

We do not pretend to think our work, as a school, ends here. At the GSD, we are committed to doing our part to bring much-needed, long-overdue change to the field, to a fundamental reorientation toward inclusion. Johnson’s influence runs deep and wide, and across generations, and yet he is also just one figure among the entrenched, paradigmatic racism and white supremacy of architecture. Undoing that legacy—of the field, not only of Johnson—is arduous and necessary, and as a school and community we are committed to seeing it through.

AN has reached out to MoMA for comment on the initial letter and will provide an update to this story when they hear back. 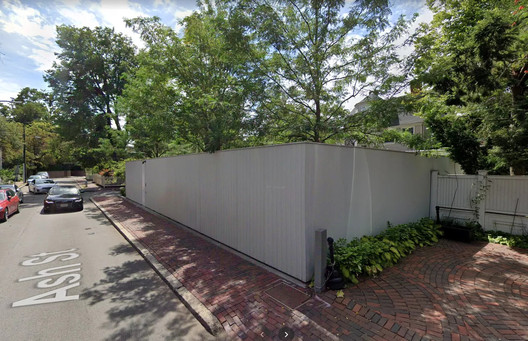