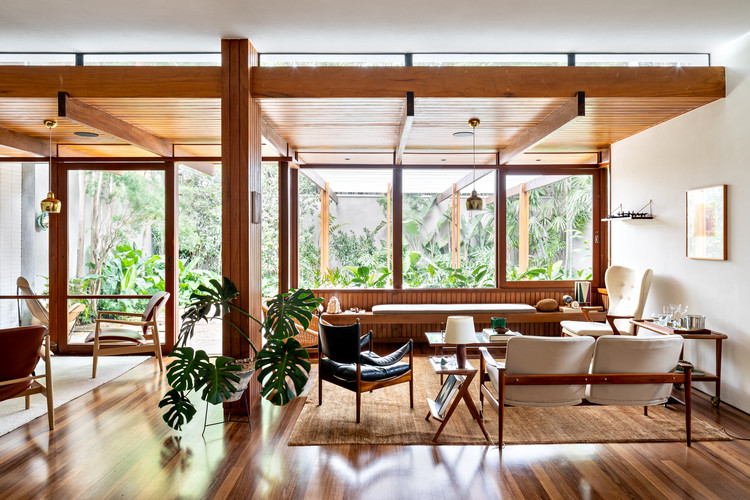 Text description provided by the architects. Designed by the architect Rodolpho Ortenblad in 1957 for his family, the house was renovated starting from the recovery of the elements that characterize the original project and some changes in its program and plan.

The front ground block, where there was an extensive service program and opened onto a central courtyard of the same character, started housing the garage and a playroom open to an outside area. Now, it has a garden and also connects to the TV room, in the main block, through new wooden and glass doors that reproduce the original frame.

The social hall panel was restored and a "shrimp" door was incorporated, using the pre-existing wood, to connect the TV room to the other rooms. The living room includes two living areas, a dining room, a new fireplace and a connection to the new office, an old intimate room, which opens onto the back garden.

The pergola with bench, an important architectural element of the house and very characteristic of Rodolpho Ortenblad's projects, had been removed and thanks to old photos it was possible to be redone, exactly as the original project.

Much of the original materials of the house were found out of character; the fulget of the closed and pillars, ceilings and wooden panels and frames painted in white, have been restored. The stone floor has also been restored and a new wooden floor has been suggested for the ground and upper floors. New bricks painted in white were incorporated into some sections of the facade where there was a beige lithoceramic that was deteriorating. Kitchen, laundry and bathrooms have been completely redone, but the materials and colors used refer to the original palette of the house, such as beige limestone and wood.

The house, which was awarded in the 1960s São Paulo Salon of Modern Art and published in the book “Residências em São Paulo 1947-1975” by Marlene Acayaba, after the renovation still maintains its modern characteristics, but adapted to the demands of a contemporary family. 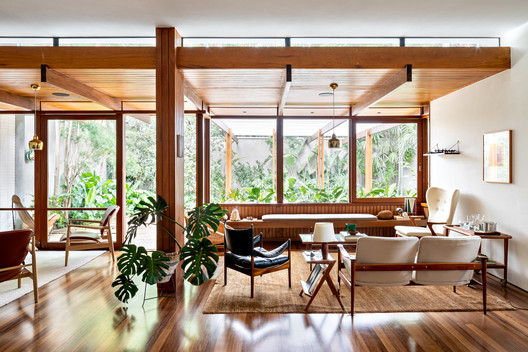