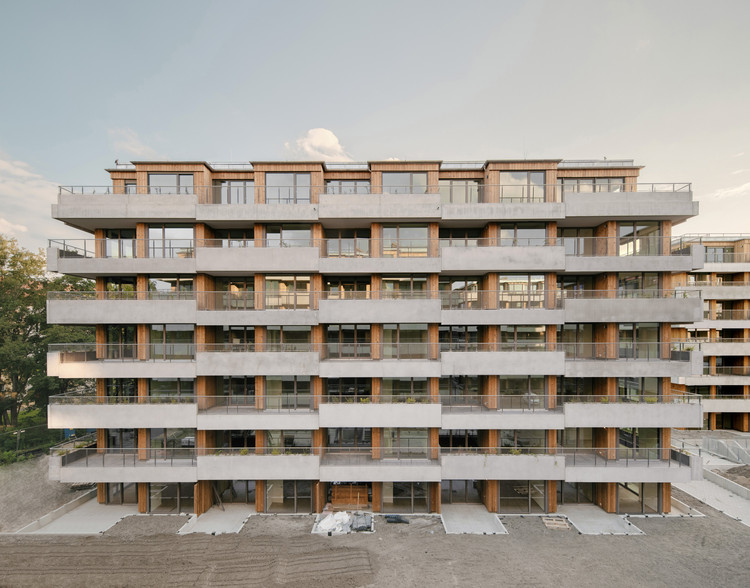 Urban Placement. Close to everything yet quiet. That’s what it means to live in “old” South Pankow, directly on the border of Prenzlauer Berg. The area around Vinetastrasse from Thulestrasse to Wisbyer Strasse has developed considerably in recent years, today forming a mixture of modern buildings and buildings from the Gründerzeit, Berlin’s “founding era”. Most of the buildings are perimeter block developments, surrounded by a historic stock of trees.

The “Thulekiez” is a calm, relaxing neighbourhood, which nevertheless offers considerable opportunities for creative design. The “th62” project was built on a former commercial site within the residential area, and adds six new free-standing structures to Thulestrasse that, in their unusual arrangement, create new relationships to the surroundings and offer new qualities of open space. The ensemble’s confident presence in its urban environment lends it a strong identity, while simultaneously engaging in a dialogue with its environment.

Urban Concept and Architecture. The 17,000-square-meter property was developed beginning in 2011 until the granting of planning permission by the Berlin-based project development group SmartHoming GmbH and the architecture firm zanderrotharchitekten to be an ensemble of six identical residential buildings. In 2017, UBM Development Deutschland GmbH acquired the property and completed the project according to the plans by zanderrotharchitekten.

The six free-standing structures are located in a park-like, car-free, 11,000-square-meter urban landscape that opens up to the sky in all directions. Thanks to their offset positioning, the buildings enjoy optimal lighting conditions and a flowing transition between gardens and living spaces. Floor-to-ceiling wooden windows create an unusual relationship between the light-filled apartments and the urban landscape surrounding the buildings. A connection is formed between the environment and the apartment buildings, between public and private space. Inside and outside intermesh to form a single space.

A sizable garden surrounds the buildings, and one accesses the buildings from inside the property. In the outdoor spaces, carefully designed recreation areas and children’s playgrounds are an invitation to linger. The sense of openness that reigns is an inviting and unifying alternative to the dense Gründerzeit neighbourhood beyond, to the closed-off gaps of the classic Berlin block. Here, the residential buildings are integrated into the landscape.

The residential ensemble is characterized by its “vertical gardens,” which lend the buildings a highly unusual atmosphere. The open wooden facade behind the gardens, structured with outcroppings and recesses and constructed from thermo-pine, allows a maximum amount of light to penetrate inside while creating a high degree of privacy for the individual living units. The recesses form spacious balconies, and a total of 2,460 large green planters are integrated into the roof surfaces and terraces that encircle the buildings.

This creates private, vertical gardens in the middle of the city, which improve the micro-climate of the apartments and balconies. Each building is accessed via a spacious atrium with natural light from above and an open staircase. The buildings each have 66 different living units with varying floor plans, from 1.5-room apartments with 43 square meters of living space, to penthouse apartments with 209 square meters. The ample floor plans can be combined flexibly in a modular fashion to create apartments with up to 5 rooms. The buildings thus allow for both small units suitable for singles and seniors, and large units suitable for families (once combined).

All six buildings can be reached from the underground garage, which has 221 parking spaces and 792 bicycle spaces, arranged in a two-story bicycle parking system. The buildings are connected to the district heating network and meet the KfW 55 energy standard in accordance with EnEV 2016. 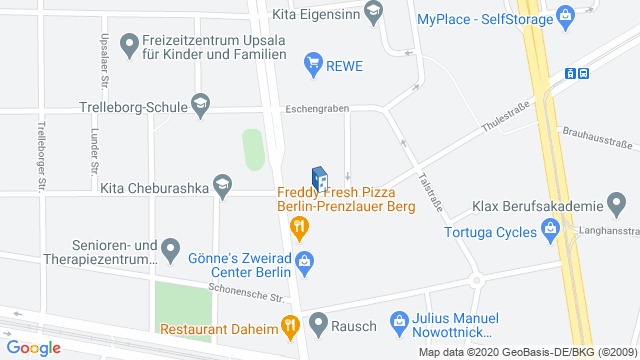 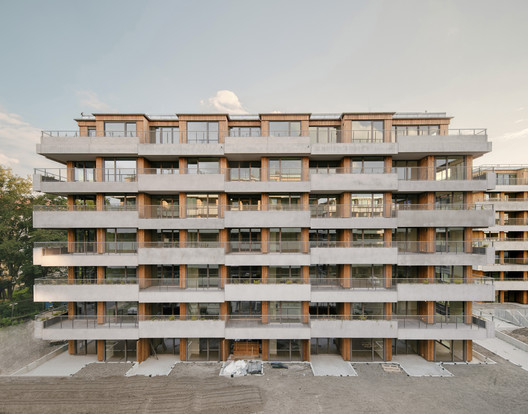