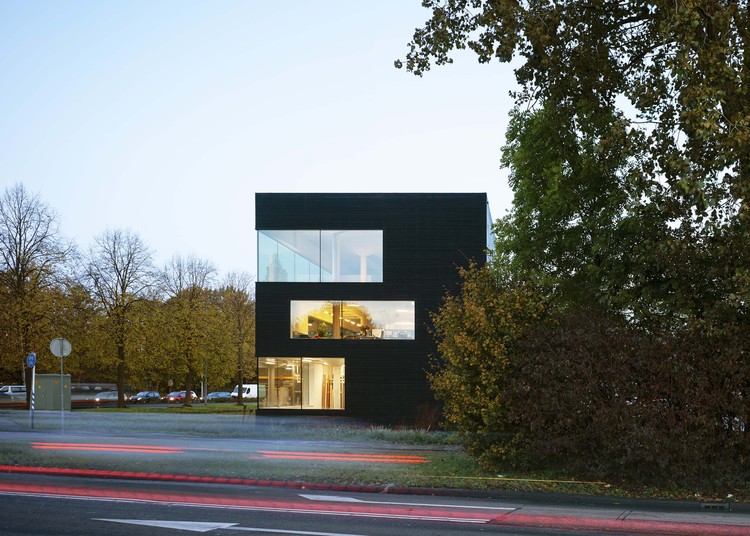 Text description provided by the architects. Terbregsehof 11 is the new headquarters office, workshop and showroom for interior design and build company 13Speciaal. At a corner in the canal, the building is located in a kind of ‘no man’s land’ beside a highway crossroad on the outskirts of Rotterdam. The building replaces a abandoned house that was bought by the client in 2016 and had been squatted for years. The building stands directly in the water on two sides, with its exterior forming the retaining walls of the canal. The design comprises a ground floor workshop, first floor office and a showroom to exhibit the company’s work that has expansive views on the third floor. Like a timber Stanley Kubrick monolith with openings punched in for the sun to shine through, the building overlooks the busy traffic intersection as well as the wooded park Kralingse Bos diagonally opposite.

Loer Architecten was commissioned by 13Speciaal to design the new all-encompassing office and showroom for the client in 2017. The brief was to create a bespoke building that would reflect the company’s ambition, expertise and skills in design and construction, drawing together a broad team of thinkers and makers. Terbregsehof is the first foray into a new neighbourhood for Rotterdam known as Nieuw Kralingen that will be developed by the municipality in the coming years. The client’s philosophy and tailor-made design run through every part of its new headquarters.

Externally, the design was approached as a timber sculpture. The black volume is broken up by large cuts of glass, giving the visual impression of floors that float in mid-air. From the roadside, the long horizontal windows are designed as a series of shifted shop windows to create a viewing box for both beholder and user that contrasts to its shadowy boxy form. At night, the dynamics of cars racing past at the intersection are inspiration for a facade of illuminated windows that appear to shoot past each other. In the design of the black timber cladding, the stepped and interspaced butt joints are positioned so that the slats wrap around the building in a whirlwind. The facade of rough sawn Douglas fir was selected for its tactility and texture of outspoken growth rings. Mitered corners and a variety of slat widths create an organic, infinite skin.

Moving around the building, the panoramic rectilinear windows give way to round windows on the entrance elevation, conversely at the ‘rear’. Here, each round window has its own meaning and role. The rising sun main entrance welcomes visitors, while the heights of the smaller circles are based on the eye level of the company’s two CEOs, sitting and standing. These windows were selected to provide contrast with the straight generic windows, and serve as a metaphor for the versatility of the company.

Structurally, facades and floorplans are freely divisible to create maximum flexibility for future uses. With floors that cantilever 2.5 metres, the structure never gets in the way of the constantly changing interior. With only three mushroom-shaped columns and a few concrete discs carrying the whole building, the open structure is built to last, and is durable due to its long-term adaptability: sustainability in its purest form.

The mass of the concrete structure is also used as part of the technical installation. The integrated floor heating is connected to a heat pump that cools and heats the building via concrete core activation. The supporting structure with its characteristic 'palm trees' therefore fulfils both a structural, aesthetic and physical function.

Inside, frameless windows result in expansive panoramas over the highway and forest, and the pure concrete interior provides a blank canvas for 13Speciaal’s own design fit-out. Architect and contractor specially developed and engineered a glass system for the project to achieve the intended level of abstraction. The custom made system was cheaper and aesthetically more satisfying than any product on the market.

In this project, designers and makers pushed the boundaries of what is possible. The complexity of the design is almost imperceptible in the seemingly straightforward building. These approaches characterise the building, a combination of expressiveness and practicability, imagination and realism. The closer you get, the more refinement you see. 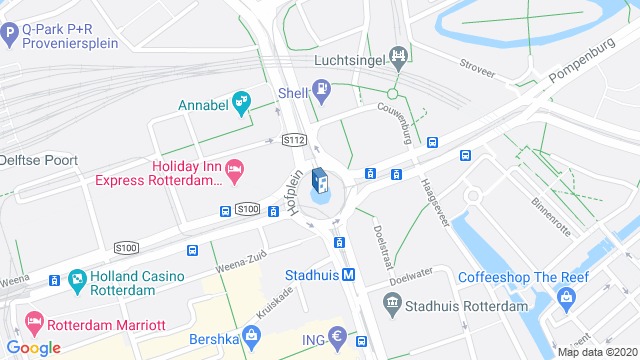 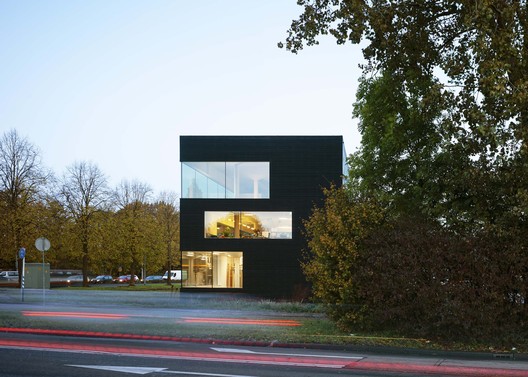