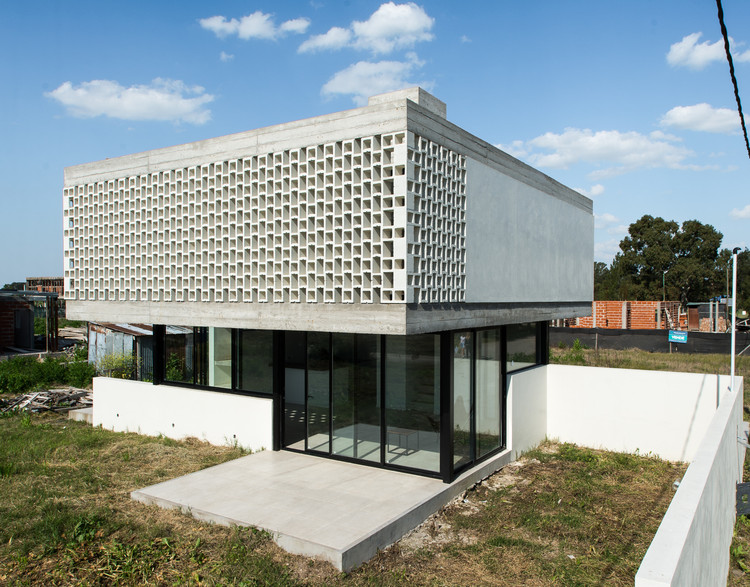 Text description provided by the architects. Our work is the materialization of a housing project within a proposal of two houses in the El Quimilar neighbourhood, on the outskirts of the city of La Plata. Resolved at the same time, the premise aimed to achieve an architecture with identity, which despite being an investment project, did not lose architectural quality.

Respecting the logic of an overall structure, it was decided to generate two units that were different and isolated from each other, thus achieving their individuality and the optimization of the resulting free space in each one of them. Promoting privacy and good sunlight are particularities that, many times, houses lose when they are coupled or when typologies are repeated. For this reason, the focus was placed on these questions, taking these characteristics as preferences of a user that, although indefinite, may be characteristic to this type of urbanization far from the urban area.

The optimization of resources and of the built space directed the guidelines towards a compact two-level architecture, which is evident in the resulting image, but incorporating intermediate spaces that guarantee privacy, the necessary sieve of light and visuals, and allows vertical connections in the house.

An introverted top floor establishes filtered relationships with the exterior, cut out by the concrete block, giving rise to the development of the most private functions. The more extroverted ground floor seeks to break the limits established by its roof to give freedom to the most public activities. The floorplan of the ground floor extends and escapes from the pure prism of the upper floor, articulating uses, assembling accesses, directing expansions and visuals, establishing perceptual limits that exceed the built material (the carpentry), thus expanding the spatial perception of the interiors.

Despite being a small house, the project strategies try to generate a contribution to the user's living experience, generating environments of maximum comfort.