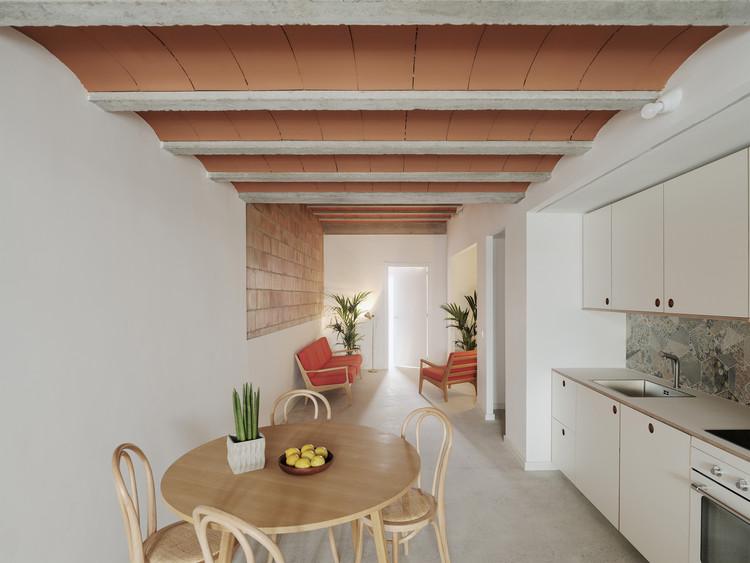 Text description provided by the architects. The city of Calella is made up of a network of buildings between party walls, very common on the Catalan coast. They are called ‘cases de còs’ and are characterized by being four or five meters wide, two or three stories high, very deep and usually have a small courtyard inside the block.

The commission not only consisted of the construction of a house but also had various conditions as a starting point. On the one hand, the house is designed for a woman and her mother to live together in. In addition, the project has to be inserted on a deep and very narrow (4.00m)  lot. This greatly conditions the vertical circulations and the entry of light to the central parts of the house.

It is established that the mother will inhabit the spaces on the ground floor and the daughter the upper floors. The ground floor will have direct access to both the street and the interior courtyard. The upper floor has a kitchen, living room, dining room and bedroom program in the same space and a room for guests and for practicing yoga.

Due to the width of the plot, a section is proposed where the levels of the program allow a direct relationship between the spaces while facilitating the entry of light in all the rooms.

On the ground floor, the different heights of the ceilings determine the different uses that can be given in each space within a free and open plan. On the upper floors, the change in the levels of floors and ceilings configure the different spaces while providing them with different degrees of privacy. It is intended that the house be as flexible as possible and that these different situations allow it to be used in many different ways throughout its life. The program tries to respond to privacy requirements without giving up a unitary character.

Diagonal cross views are sought so that all the spaces of the house are controlled at all times, avoiding the visual barriers that limit the space. From the access to the house in double-height, there is a direct view of the house of the mother on the ground floor and of the daughter diagonally upwards. From this space, the entire dimension of the intervention can be glimpsed. The stairs ascend through the house showing the different possibilities offered by the different spaces. The structure appears and disappears, showing the beams as life support, vegetation taking over the structural and vital elements.

Traditional construction methods are executed with local materials and labour. An intention of expressiveness of the entire process of the project is manifested through structural sincerity, as well as the materials used. Honest, simple constructions that combine the naturalness and spontaneity of the materials.

Thus, traditional materials such as ceramics, concrete, plaster and wood are shown with total sincerity and expressiveness, giving the project a strong character. 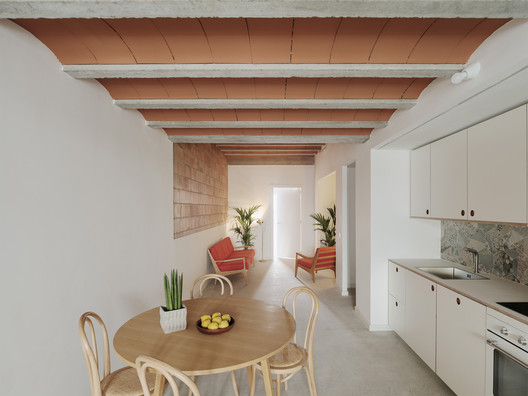