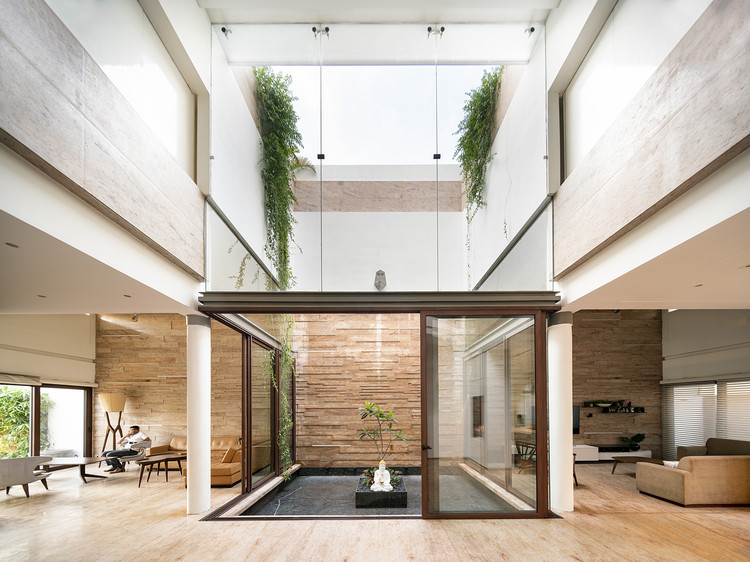 The Brief was to design a house for a large family of 9 people consisting of two couples and 5 children in their teens. Also an area for domestic help was required. The concept of the project evolved from a close analysis of the family setups of large Indian families in the urban context and thus striving for a perfect balance between private and public spaces and also the inter relation between the generations.

Planning - The house is essentially designed around a courtyard with all the public spaces overlooking into it. The varied scale of public & private spaces and there different interactions with the exterior was a central idea of the project. The public spaces have been expanded volumetrically to emphasize their importance as congregation spaces. The concept of a cross axis has been utilized in this project as well, an approach adopted by the practice for smaller houses. The vertical axis holds the entrance and is mostly transparent allowing visual connection within the house up to the backyard. The horizontal axis holds the circulation, with the staircase acting almost as an amphitheater overlooking the courtyard.

The functions are divided as per floor, ground for public spaces, first for couples and second for children. Ground floor holds the living spaces, a courtyard with a water body, a guest bedroom, kitchen and dining spaces, central lobby and staircase. The first floor holds two bedrooms for the couples with their respective toilets and dress. These bedrooms overlook into the central space with openable shutters almost like ‘jharokhas’ in the ancient Indian ‘Havelis’. The second floor holds two bedrooms, one for 2 boys and one for 3 girls, each having its own terrace garden. The idea was to create an almost segregated private zone for the youngsters. Also, the interaction of these rooms to exterior is to the terrace gardens instead of opening to the road (& overlooking school building) in the front and houses at the rear. The area for the domestic help is also on this level with a separate access from a spiral staircase in the rear court.

Another important aspect of the design was to resolve the serious parking issue as almost all house owners on the street own at least 3 cars. The clients in this case owned 4 cars & we wanted them not to clog the street (especially at night) like other owners. This was resolved by an amorphous boundary that had foldable extensions so that all cars could be parked inside with only covering a part of the front ramps to the house.

Environmental Concern - The main strategy is to cut down the thermal intake of the house. Since the residence is a row house plot, the longer edges are common to neighbor residences and the shorter edges form the front and rear facades that face west and east respectively. Hence, to cut down the harsh sun of the west , a specific metal jaali pattern has been designed to allow in diffused light. The terrace gardens on the second floor add to the thermal mass to the roof reducing heat gains and keeping the living spaces cool.

The central courtyard with a water body allows cool winds being directed and channelized into the house. The courtyard facades are so designed that do not allow direct summer sun to enter into the living spaces at the ground floor. The double height spaces and the stairwell allow stack ventilation for the whole house. The skylight above the stairwell allows diffused light to enter and accommodates vents to throw out hot air. The top floor bedrooms opening into north facing terrace gardens avoid harsh sunlight to enter these rooms.

Materials - The project was designed keeping in mind the prevalent construction practices and locally available materials. Composite R.C.C and brick construction has been used. The overall material palette is limited to only white marble & sivakasi gold granite along with simple white painted surfaces.