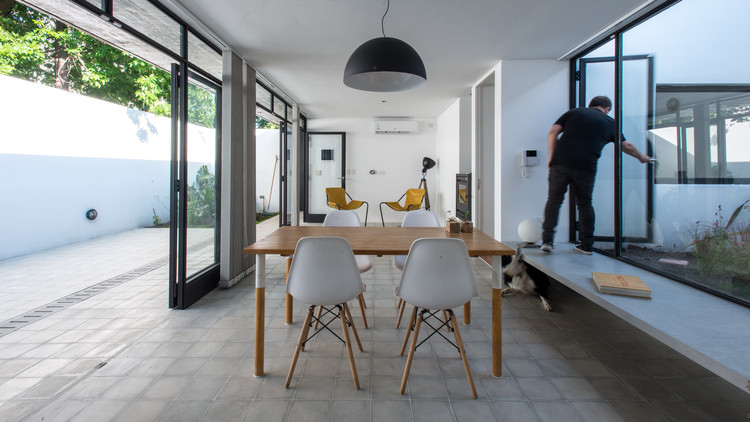 Text description provided by the architects. This is a small remodeling, located in the center of the city of La Plata, Province of Buenos Aires. A corner house that did not serve the needs of a young couple who wanted to make their home.

The curious operation that we proposed to them was, instead of enlarging the house, making it smaller and optimizing it. With an emptying operation we gave light to a bedroom and the possibility of light entering from two orientations to the living room.

A space as long and wide as possible, entirely open to a patio, which matches in size. A 12 meter span beam, apparently unnecessary for a 50 square meter house, ensures the absence of columns, of mediations between the interior and the exterior. The carpentry can be opened and the living space, meager, is doubled in the patio. Now there is a house where interior and exterior are the same, where patio and living room are the same. A wall that is white on the inside and black on the outside limits visuals and gives protection to that patio.

The house needed that clear, quiet courtyard, isolated from the city outside. However, the look of design over construction remains the key to the project. This beam, only possible thanks to the reinforced concrete, produces the opening and an eaves that produces the shade protection to the north. Like the galleries of the ranch of the Argentine pampas. Here, the absence of space, of infinite perspectives of the plain, is replaced by the neutral white image of the plastered wall. The user will imagine any width they want on that white canvas.