Delicately excavated from the natural grounds of Jordan’s Wadi Rum, Jordanian architect Rasem Kamal transformed the phrase of “form follows function” into “subtraction follows function”, emphasizing the relationship between external form and internal space with a resort that promises a sanctuary both above and underground.

In the newly-released video of the proposal, the architect uncovers the hidden resort and takes viewers on an enchanting walkthrough of the proposed Wadi Rum Sanctuary Resort. Kamal complements the desert’s jagged landscape with the resort’s subtle architecture, letting the structure blend seamlessly with its surroundings.

The Valley of the Moon, another name for Wadi Rum, is a UNESCO-protected site, which provoked the architect to not disturb the surface and work beneath the significant mountains and valleys, and transform the space below into an undisturbed 16,000 sqm sanctuary. The resort is one of the first architectural projects that does not have any carvings in the mountains and tackles just the underground.

Kamal explains that the inspiration behind the project was ants’ colony nests and their subtracted chambers. The nests’ organic layout is done according to needed volumes only, creating unexpected circulation routes. Based on the same methodology, the architect wanted to experiment with excavations but with more complex programs such as a spa, a museum, and resort. This “building underground” created unrestricted horizontal expansions and introduced new means of building slabs, walls, and connecting spaces.

The design concept was based on excavating a series of fragmented yet interconnected courtyards which remained exposed to the sky despite being under the sand‘s datum line. These courtyards control all the hotel rooms and museum halls around them, in addition to the underground circulation network of ramps and the service loop. Since every courtyard was subtracted according to its surrounding functions, each had variations in volumetric experience, lighting quality, topography, and orientations towards site views.

The subtracted voids form concealed spaces adapted to the users’ needs of functions, circulation, and natural light. The architect wanted to avoid the constant focus that is usually put on dynamic forms and new building materials, and shift it towards the internal spaces and how we can live, experience, and enjoy them by using the same design process usually used on external spaces and structures. The entire underground structure was sliced into a consequence of repetitive sections in order to study the relationship of the hotel with the museum’s functions, the courtyards with their surrounding chambers, the courtyards with the circulation or service network, and the relationship of all the previous elements with the changing datum line of sand.

The diagram shows the different operational scenarios during the different seasons of the year. The excavated courtyards network are designed to function even if few courtyards were to be filled with sand because of occurring sandstorms. Sand could be re-excavated since their coordinates represent a grid, similar to archeological grids. 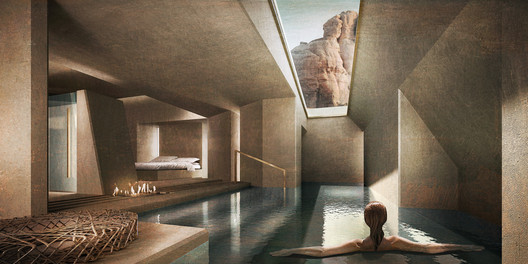