Save
Call for Entries: Transform a Church in Ruins into a Concert Hall
Share
Or
Copy

The third edition of the architecture competition Re-use Italy promotes the repurpose of a forgotten church in southern Italy, in Grottole, in the province of Matera. Facing the issue of the abandonment of small towns in Italy, the contest in partnership with, ArchDaily, KooZA/rch, Graphisoft, Wonder Grottole, with the official support of the Municipality of Grottole (Matera), Ministero per i beni e le attività culturali e per il turismo, FAI Basilicata, Matera Art Film Festiva, ANCI Basilicata, Associazione Borghi Autentici d’Italia, Ordine degli Architetti P.P.C. della provincia di Matera, seeks to reuse the “Fallen-church” and transform the ruin into a Concert Hall. 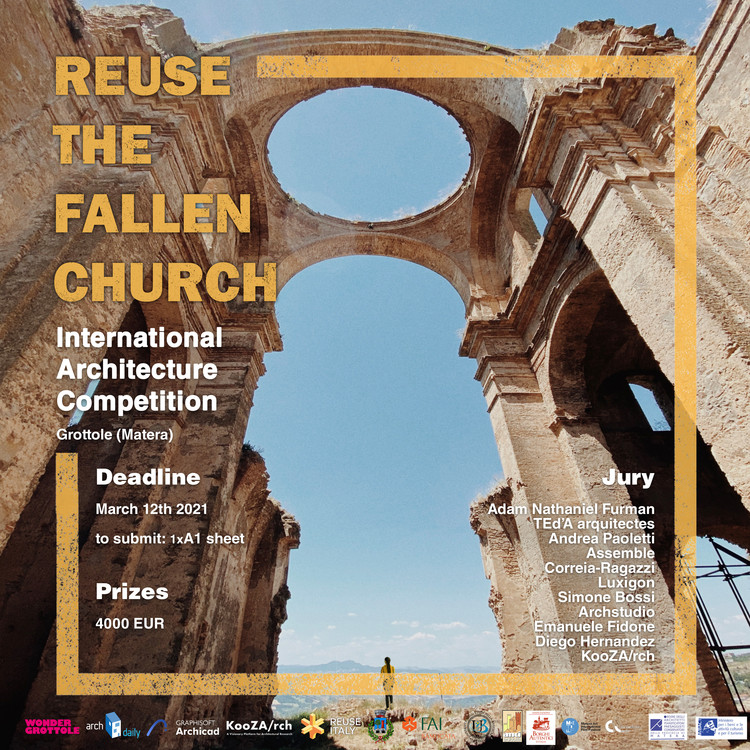 Chiesa Diruta is a catholic church built in Grottole (MT) in the 15th century, in order to host the local community of clergymen and to become one the most important churches of the bishopric. It suffered a lot of damages due to earthquakes, fires, and building issues so it was soon abandoned.

The competition, open to architects, engineers, and students, asks the participants to transform the ruin into a Concert Hall. The deadline is March 12th. It’s requested one A1 sheet (59cmx84cm). The total prizes are 4000 Euro. The submitted projects will be displayed at an exhibition in April 2021 in Grottole, and the winners, in addition to receiving a prize, will be invited to explain their projects to the citizenry.

The international Jury members are:

Is it possible to bring back to life one of the most important religious buildings of Southern Italy? The answer to this question is in the hands of the architects, the engineers, and the students who will participate in this competition.