Save
Northwest Native: Homes of the Salish Sea
Share
Or
Copy

The Pacific Northwest is synonymous with rainy mountains, expansive coastlines and dense forests. Known for its majestic landscapes, the region has innate connections to the waterfront. Over time, these channels were referred to as the Salish Sea. Encompassing the Strait of Georgia, the Strait of Juan de Fuca, and Puget Sound, the intricate network of bays and inlets is bounded by British Columbia and Washington. Dotted with a number of major port cities, including Bellingham, Vancouver, and Seattle, the Salish Sea has also been home to many indigenous peoples. 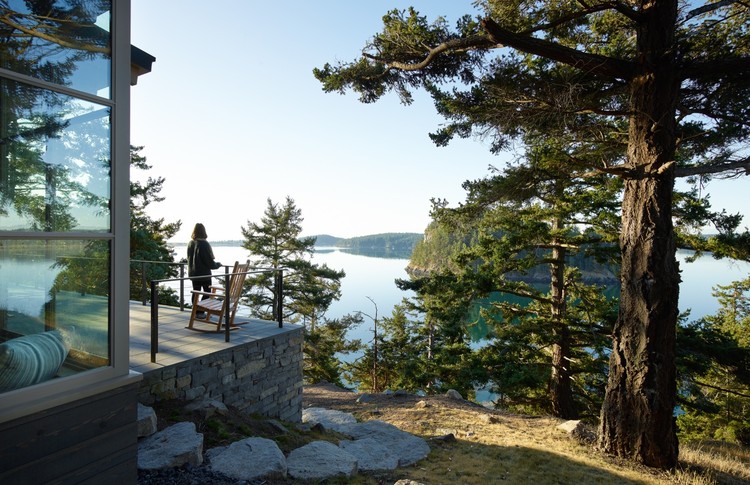 Historically, the sea and its waterways were important trade routes, and these coastal estuaries dramatically influenced the built environment. Architecturally, the villages and settlements of the Salish Sea consisted of longhouses, fishing platforms, and pit-houses. Made by the Coast Salish, Northern Wakashan Kwakwaka'wakw and Southern Wakashan peoples, the buildings were commonly built using Western Red Cedar. These traditional structures were built along rivers and watercourses, sites accessible by dugout canoes. Though few of these structures remain today, modern residential designs continue to embrace the material and haptic relationships inherent to building along the Salish Sea. The following collection explores contemporary designs and how traditional logic continues to shape Northwest living.

This project is study of environment and experience. The home itself is secondary. With views to the west that are uninterrupted Puget Sound, San Juan Islands and Olympic Mountain Range, the experience exists regardless of the home. The team had to maintain this environment with minimal intrusion when adding the structure. The owner also requested a small metal fabrication shop on the west side of the garage, toward the view.

Shadowboxx responds to a desire to facilitate an intimate understanding of its setting and explores the tradition of gathering around a fire. The site for this island retreat is a remote, windy point of land in the San Juan Islands in the Strait of Juan de Fuca. Tucked between a thicket of trees and a rising bank, the house angles toward the bluff with its fifty-foot drop to the sea and view of the Olympic Mountains beyond.

Located on a rural site on Whidbey Island, a local family sought a new home and retreat on the site of their family farm. Out of respect for turn-of-the-century agricultural buildings located on the site, the home ticks into the edge of a densely forested hillside, overlooking chicken sheds, a weathered red barn, cattle fields, and a fishing pond.

Located on 30 acres of wooded waterfront property on Lopez Island, WA, this 1,300-square-foot vacation home sits in a meadow of native grasses on a high bluff overlooking Puget Sound. The design respects the existing site, where draught-tolerant indigenous grasses and plants merge with existing boulders and engage the house so it merges seamlessly with the landscape.

The owner of this property came to us looking for a personal retreat inspired by a home lost to fire decades earlier in the hills of Appalachia. The team's task was not to recreate it but rather to give its spirit new form in the Pacific Northwest. Taking inspiration from its remote site in the San Juan Islands, the team envisioned a series of simple stone volumes. From that concept emerged the main house and a guest house, each responding to its own unique location on the site.

This craggy H-shaped house wraps around itself to contain two inner courtyards. All of the house’s windows and doors point toward ancient moss-covered rocks or the Pacific Ocean, creating lively contrasts as one moves through the house. Low-slung and modest, the house has a constant parapet height, to emphasize and visually contain the undulating concrete and courtyard screen that is scribed to the existing contours of the rock. Externally the form of the house is quiet and solid, belying an inner complexity and spatial variety in plan.

Linear House is located on a sixteen acre farm on Salt Spring Island, an island in the Strait of Georgia between Vancouver Island and the mainland of British Columbia, Canada. The property is bisected from east to west by a long row of mature Douglas fir trees. There is a gentle slope falling across the site from south to north. The south half of the site contains an orchard; the north half a hay field.

Jim Olson’s reverence for nature and admiration of the site’s beauty is expressed in the design of his cabin located on Puget Sound and nestled amidst the towering fir trees of an ancient forest. What began as a 200-square- foot bunkhouse built in 1959 has morphed through subsequent remodels (in 1981, 1997, 2003 and 2014) into a modest weekend house. Each successive addition and remodel has reused and integrated the previous structure rather than erasing it, revealing the history of the architecture and the process of its evolution.