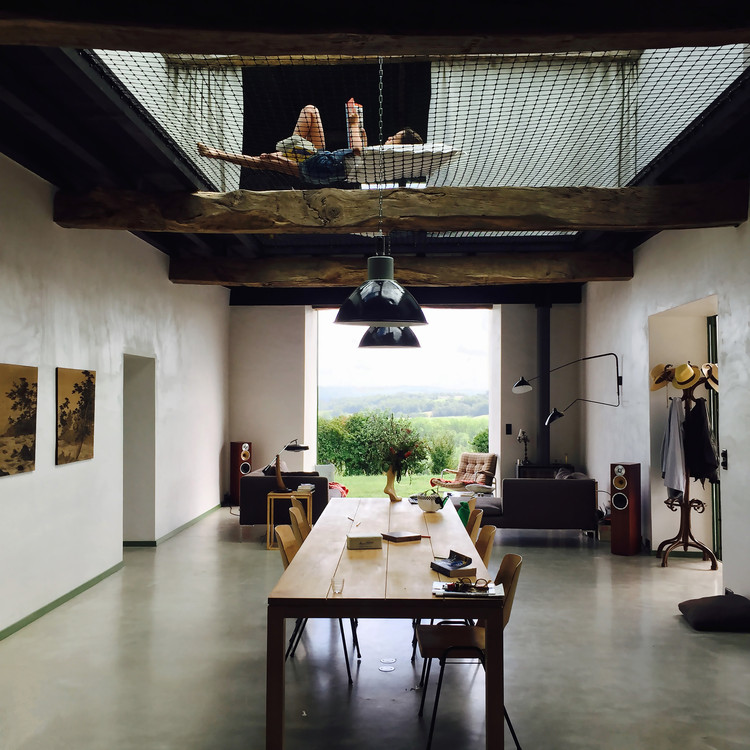 Text description provided by the architects. We fell in love in Labastide Villefranche, on the outskirts of the french Basque country. With an old farm, a collapsing vernacular agricultural building.

From outside, the house looked like any farmhouse in the Basque Country, a massive yet unpretentious architecture. When we first opened its main door, we were expecting to come across the usual dark and damp central space called ”Ezkatz”. The roof had collapsed and pulled the upper floor with it, turning the house into a forest whose main room had become a clearing.

”Let’s not change a thing,” we thought.

Manifesto for a living house. In many ways, Hourré epitomises our approach to space, landscape, ways of living, and sense of freedom. Moreover, it stresses the priority that we give to what is already there, what is free, and what is yet to come. Also, unlike a lot of ”one-trick poney” buildings that we see, it's a project that is generous with ideas!

Changing one thing changes everything.  And so we kept the roof’s opening intact and turned the doors into sliding windows mounted on the facades so they disappear when opened. Unlike many architects who intend to recreate sunsets at each project they do, we believe that integrating it into our building is enough (and much cheaper). Doing so, the house changes constantly, through the hours, days, and seasons.

Building for birds, flowers, and plants. There is this picture of a swallow inside the house that we always show when we do conferences. It is a pretty lousy picture. Birds are not easy to shoot. Maybe that’s the unfortunate reason why we talk much more about how windows look like instead of making a place for the birds so they can be part of the house. And the same goes for flowers as well as any other plants.

What we want is free: Eco-Services.  In winter, the sun directly heats the 70 cm thick stone walls and an air/water heat pump heats up the floor. The walls then turn the house into a stove. The inertia of the uninsulated walls allows the house to fully breathe, silently since there’s no CMV system (some of us have forgotten that air flows naturally without any engine nor electricity).

And in summer ? Well last June, as France recorded a 40° heatwave, the house visitors were asking whether there was any AC to get such a cool room temperature. That’s the magic of these thick stone walls that have not been insulated. Keeping the inertia intact and freshness all summer long.

When we started the project, one of the main questions we needed to address was:

One rule: DO AS LITTLE AS POSSIBLE AND CREATE 50% OF OUTDOOR SPACES.

Doing so, we conceived a bioclimatic design that creates different microclimates all over the house.

The southern terrace.  A sheltered, wind-free, double-height buffer space between interior and exterior.

The sun is low in winter and warms up space whereas as it goes up during summer, the roof protects us and the vegetation provides its natural freshness.

The roof opening made it possible for the upstairs bedroom to have a view over the Pyrénées mountains and for the plants to get watered naturally and it creates the benefit of a mountain view for the first-floor bedroom.

The barn. At the back of the house, the former barn was left as a technical and working space. Hence with no insulation nor heating.

The western terrace.  Above the barn, the former hayloft was made of cinderblocks. Thus very easy and cheap to take down.

Which we did, resulting in an 80 m2 terrace which became the best spot for sunsets.

Also, with its 7m tall rosebushes, the month of June is particularly lovely when thousands of roses are blooming.

Accessibility. Another thing we had to design since one of the family members' seats in a wheelchair. There again, instead of installing a lift, we went for the economical yet ever operative solution of wooden ramps.

The outdoor bathroom.  With walls on three sides, the open-air bathroom is cut off from the wind and a true “sun catcher” with its own microclimate. Here, one can take showers all year round but the best moment is definitely peeing at night under a starry sky.

The indoor bathroom. Instead of creating partitions and making expensive openings in these thick walls, we left the spaces as they were. By letting the house invent itself, we discover a daily life that we could not have invented ourselves. A 25 m2 bathroom is not a bathroom any longer, it becomes a library, a living room, a playroom, or whatever else you want it to be.

Two birds with one stone. We always create spaces that know how to do several things. A staircase is also a place to sit or a bleacher to watch the chef cook, but it also becomes a bookshelf, a small desk, a bar, a storage space for kitchen appliances and others, etc.

Thanks to a simple construction system that allows “mass” production and reduces costs considerably, we create railing-bookshelves, nightstand-stairs, bed-bookshelves, wardrobe-beds… Even a floor can turn into a desk/working space.

Also, since a guardrail can only do one thing, if we replace it with a construction-site safety net, it can be a railing, a playroom, a sofa, a hammock, a spot for reading, or studying the clouds or the flying royal kites or simply stargazing. Or a huge bed for guests after the party.

What we believe in. Only when the landscape and the inhabitants are part of the house, does it becomes alive? Then, is it not invented once but instead, gives way to its inhabitants (humans, insects, trees, birds, flowers, and even earthworms) to invent it every day.

A living house is a happy house, capable of sharing its happiness. That’s how architecture makes life more beautiful than architecture. 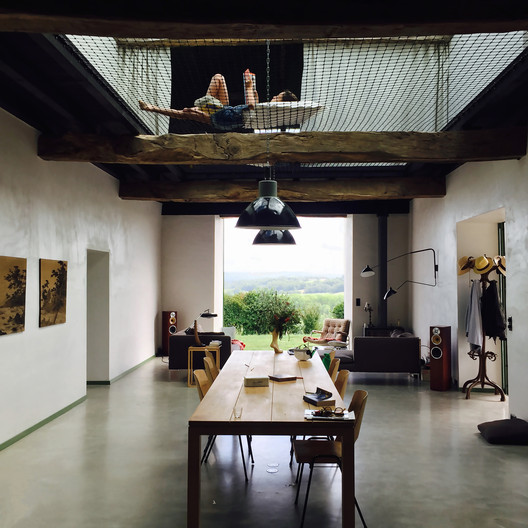