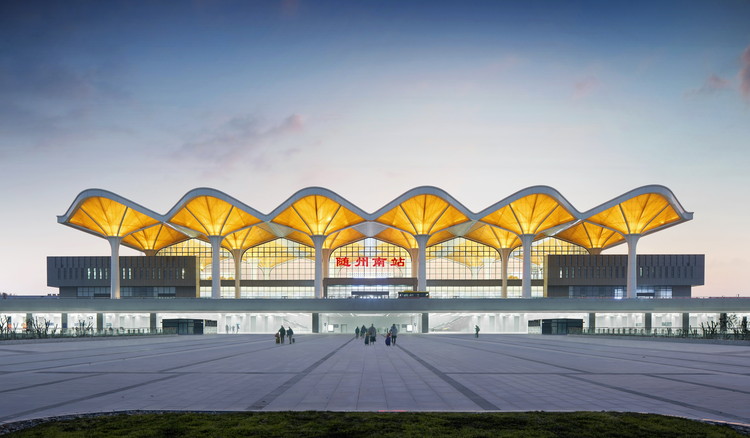 Text description provided by the architects. Wuhan-Shiyan High-speed Railway (from Wuhan to Shiyan) is 399km long, with 12 stations along the line, connecting Wudang Mountain, Gulongzhong, legendary emperor Shen Nong's hometown, Yellow Crane Tower and other famous tourism spots. The tourism revenue of this region, so-called the tourism high-speed railway with the most beautiful landscape in Hubei, accounts for 70% of that of Hubei Province. With the opening of the Wuhan-Shiyan High-speed Railway, the distance between Wuhan to Suizhou will be shortened to 50 minutes only. The high-speed railway provides an unprecedented opportunity for the urban development of Suizhou, especially for the tourism. As a destination of tourism spot, the station will also become an important icon to present the local uniqueness.

The Millennium Ginkgo Valley in Luoyang Town is one of the four ancient ginkgo landscapes in the world. During every Mid-Autumn Festival, the golden leaves fly around the ginkgo trees, becoming a paradise in the eyes of tourists. Hence, we follow tree structural system by creating a forest-like space. The straight tree structure has the most direct visual connection with the dynamic canopy, and clearly shows the logic of structural force transmission. Therefore, in the design of Suizhou South Railway Station, we integrate the natural artistic feeling of "under the ginkgo tree" into concept design from the perspective of presenting urban regional characteristics, so that tourists can get unique space experience.

Tree structure and space creation
Through the abstraction and reconstruction of ginkgo leaves, we get the basic "leaf unit" that makes up space. The dimension of each unit is 27 x 24 meters, covering 648 square meters. The main space of the station is composed of 24 identical leaf-like units. Also, we optimized further during implementation: every four small roof units are grouped and converted into six groups of continuous curved roofs. The structure is more reasonable, construction difficulty is lessened, while construction cost is reduced in the meantime.Thus, the rhythmic natural curves and the light and flexible architectural structure can be integrated into the internal and external building space. The leaf-like unit consists of architecture, structure and lighting. The light reveals gradually the internal structure through the film, just like the leaf texture, which metaphors the nature and embodies the beauty of structure.

Indoor and outdoor lighting
The comfort of indoor lighting is also an important factor. A skylight on the roof produces soft diffuse light through the filtration of transparent film, avoiding glare and direct sunlight, and the indoor illumination is more uniform as well. We determine the dimension of skylight through lighting simulation calculation, so that the waiting hall can meet the illumination requirements in the daytime even when it is cloudy. The sunlight shines through the top skylight into the "leaf" units, and become goldenly luminescent caused by the light diffusion, creating the spatial intention of " golden leaves fly around under the ginkgo tree". It perfectly shows the warm and transparent texture of the leaves. The introduction of natural light makes the architectural space vivid and full of vitality. At night, they will be lighted by the LED lamps inside through transparent films, which conveys the meaning of traditional Chinese "lanterns", and further enhances the symbolism and instructiveness of the station.

New materials and new technology
The key to the formation of this spatial effect is the performance of the ETFE film covering the outside of the unit structure. We determined the three basic elements of 75% transmittance, diffuse reflection and golden color, and had looked for suppliers all over the world. At the last minute, German ETFE film manufacturers agreed to customize this material for us. ETFE film material has good durability, flame retardancy and light penetration, but it is sensitive to tension and temperature changes. In order to ensure that the "leaf" finally forms a plump and smooth curved surface, the project team needs to have extremely accurate control on the tension of cable net system and film material. Together with the construction company and the university research team, we did an in-depth study on the mechanical properties of film materials and the special technology of cable film stress system. Relying on BIM and 3D field scanning technology, we optimized and innovated the some parts and structures, developed a whole set of technical measures, and accurately completed the design and installation of various components of "leaf".

Highly comfortable space experience
When you come to the railway entrance of Suizhou South Station on the highway by car, you will feel you are in the forest of ginkgo trees. You will be deeply impressed by the semi-outdoor space of this well-sheltered station. When you walk inside the Suizhou South Station, the gentle, diffuse and comfortable natural light penetrates from the “ginkgo leaves”. Due to the good performance of sound absorption effect brought by the film with surface area more than ten thousand square meters, the waiting hall is very quiet, and the broadcast is exceptionally clear without the common noise distraction like other train stations have.

Eventually, the “ginkgo leaf unit” has become the most impressing part in the entire building with rhythmic structural unit, soft light and gentle texture. It blurs the artificial and natural boundary, and illustrates the profound eastern traditional philosophy of “unity of man and heaven”. 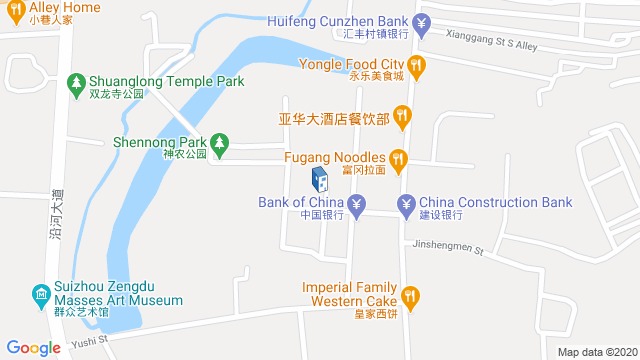 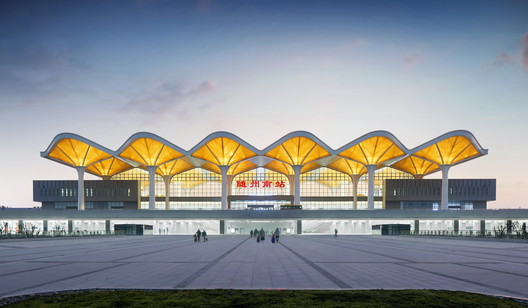