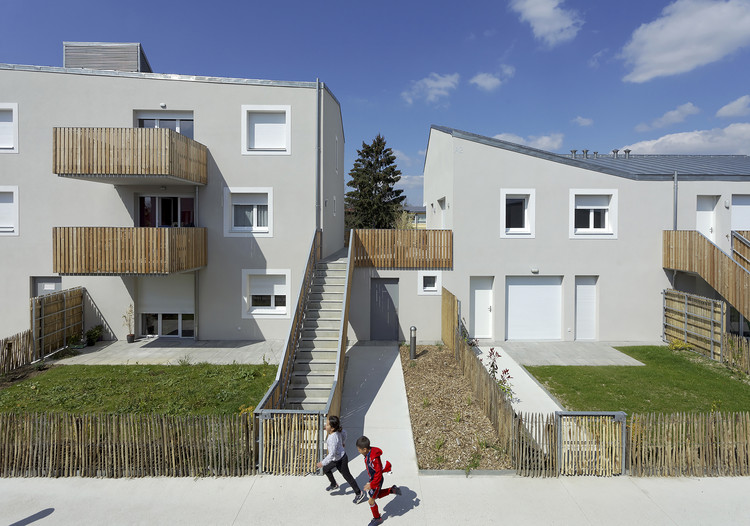 Text description provided by the architects. The town of Ecquevilly stands on the top of a hilly landscape opening onto vast fields. After the arrival of Renault’s factory in Flins, this village (which had grown according to its 16th-century castle’s layout) experienced three waves of expansion: first, a new large residential area, then an activity area, and finally a large housing estate.

The latter has a typical modern morphology. A linear building, more than one kilometer long, stands out of scale compared to the town’s average scale. The project replaces one of the sections of this building: its demolition was carried out as part of the restructuring of the district led by urban planners JAM architecture-territories.

The two separate plots of this operation are located at the border between the historic part of the town and the large modern buildings area. This unique situation requires a peaceful transition, resulting in a hybrid design that is both contemporary and inspired by traditional architecture.

All volumes evolve from an asymmetrical longhouse profile with an identical thickness of eight meters. This arrangement allows the development of dual-aspect apartments, to ensure a bioclimatic architecture. Roofs were designed in order to liven up these volumes. 5 detached houses. In the second plot, 5 detached houses fit harmoniously into the skyline of République’s street, characterized by houses with diverse shapes and dispositions. Some variation is introduced by alternating the roofs’ slopes direction. Private driveways separate built volumes.

The three historical registers (base, body, and roof) are reinterpreted in a contemporary style. The base is made of taupe-colored stained concrete and the body is coated with a gray-tinted render. Double-sloped roofs are made of natural zinc for the multi-unit building and pre-weathered zinc for houses. Wood in guardrails and fences provide warmth. This project obtained the NF Habitat RT2012-10% label, which certifies its energetic performance. 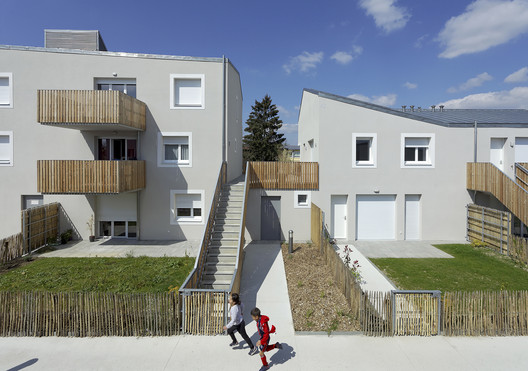