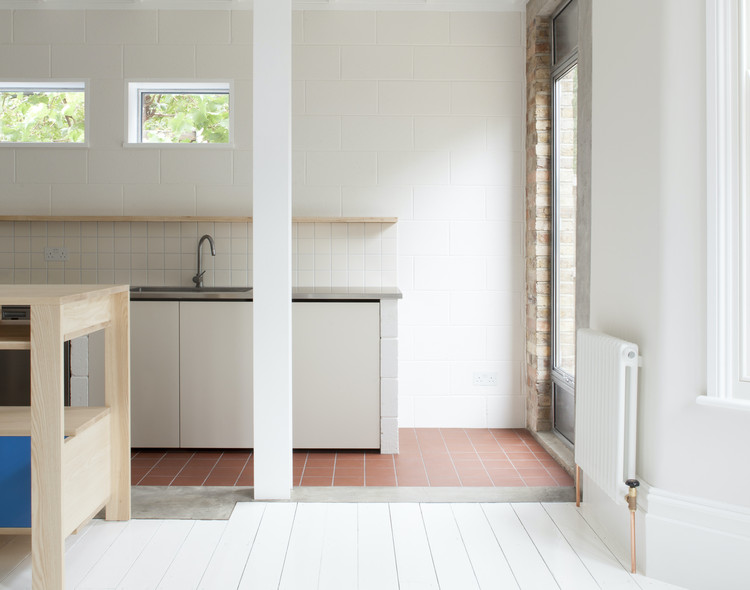 Text description provided by the architects. Architecture firm Hesselbrand have completed a family house in east London designed for working and entertaining from home. The project is the first to be completed in a series of houses designed by Hesselbrand that re-imagines the traditional terraced house for contemporary life. Both floors of the house have been strategically rearranged by creating new openings, separations, and a large side extension on the ground floor. This makes the rooms of the house connect directly instead of through a corridor to allow for unlimited ways to move around the house. A new passage is opened from the bright front living room, leading you through a dark ochre coloured library into the new kitchen.

In the kitchen, white-painted concrete blocks and steel columns form a sharp contrast to the existing house, and exposed concrete foundations on the floor draw a line of where the old wall used to be. At the back of the room, a large steel-framed window completes the passage by framing a view of the new garden room underneath a black painted timber pergola. Each space in the house is given its own spatial quality; bright, dark, wide, narrow, and so on.

When the character of a room is defined by its quality or atmosphere rather than its function, it becomes more flexible and open to interpretation. For example, one of the bathrooms has the character of a normal room with the only exception that there is a bathtub, whereas the other bathroom is tiled all over in a perfect grid as if one continuous waterproof surface has been wrapped around the whole room.

The economic approach to the redesign of the plan, with its repurposing of existing spaces, can also be found in the use of materials. In keeping and re-using as much of the existing building as possible, the design is aimed at finding a new use for old materials. Bricks left from the demolition are re-integrated into new parts of the building and leftover block-work is turned into a new kitchen. The structural steel is left exposed and painted to match the existing moldings, forming a visual link between the old and new. This approach of re-purposing both plan layout and materials ultimately gives each room more purpose and character and the house becomes significantly richer in experiences.