Save
House In The Farm / Studio Inscape 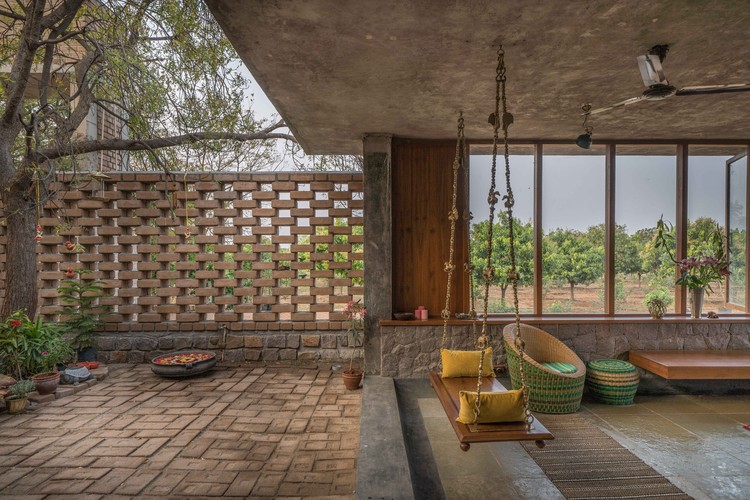 Text description provided by the architects. The farmhouse has been weaved around an existing tree and designed around a visually connected courtyard from all spaces without losing the linearity of the space. Introducing a central connecting linear corridor along the court satisfied the client brief of having a linear house and a courtyard house at the same time.   Compressed Stabilized earth blocks made from clay of the farm land ,ergonomically designed sill levels, multi functional & non-rigid furniture layouts, human scale- relatibility, materiality are the factors that not only make the project sustainable but also enhances the user experience.

Design Ideology :
A subtle foreground to the natures backdrop
The design visualization is to let the house merge and do the talking to the natural surroundings which is the backdrop to the house rather than it being the dominant characteristic overpowering its surroundings. The thought behind the conceptualizing of the house goes back to the love of organic farming of the client. The love that we share with the client of collecting antiques led us to developing a house that could accommodate their interests and also let the house evolve organically overtime instead of creating rigid defined spaces.

Materiality:
An extension to the exteriors
We were sure about keeping the embodied energy of the house low. To achieve that, we used bricks that were made on site with excavated soil as flooring in the central courtyard which was also the skin of the structure. The brick walls and form finished slabs were left bare to merge with the surroundings. The design is pivoted around the landscaped courtyard which treads through the building.

The levels in the house from the courtyard to the common spaces not only changes the scale from space to space but also create a varied visual experience throughout the house. Bedroom walls were lime washed to create a private and cozy feel. Tandoor flooring with black oxide skirting was used for the internal spaces. Reclaimed wood for the doors and windows, toggle switches with exposed conduit sets an informal feel that we wanted to achieve. All the design decisions not only made the house very economical but also sustainable.

Furniture Layout
Activity Analysis -Multi-Functional Space
The furniture layout of living space accommodates an L shaped bench which serves as an informal interactive space bringing the warmth required for a farmhouse rather than a formal sofa set arrangement. Understanding the relationship we want to give within the spaces, the furniture layout in common spaces was planned so as to accommodate larger groups and also cater to individual/smaller groups without intimidating by visually connecting them to the exterior green farmland 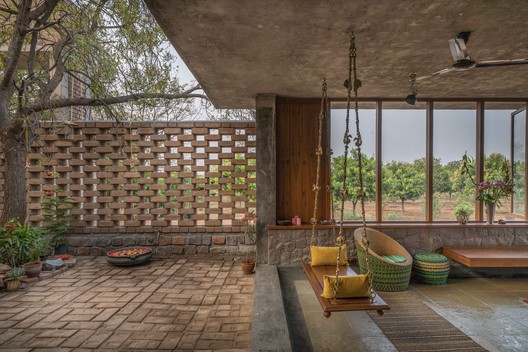