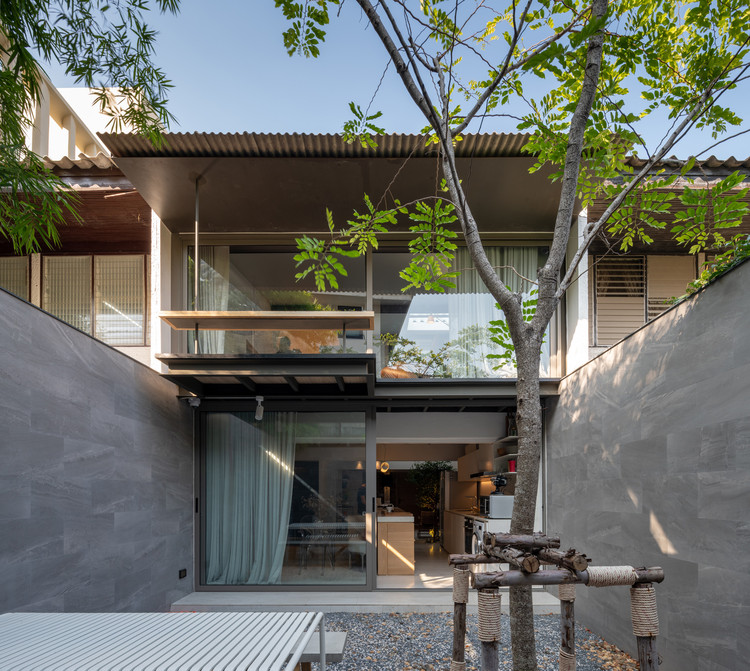 Once the owners, started looking for their own house close to their workplace, they ended up acquiring Baan 96/1, the 30 years old row house standing next to their studio.  First, they decided to maintain the existing exterior appearance in respect to its surrounding neighbor.  However, with the steep slope gable roof extending from the master bedroom wall in the second floor to the parking garage on the first floor blocking the northern light, and the location of the toilet in the mid-section core of the house preventing a cross ventilation, the architects decided to empty the interior walls and the false ceiling of the house and rearranged the spatial quality in order to meet their living lifestyle.

On the ground level, with the intention to create a single space interconnecting public and space altogether, the architects began the design by intuitively inserting a small green double height courtyard with a skylight.  Next, they decided to place the five-meters long white counter island as a main horizontal element to balance with the vertical presence of the courtyard.  With meticulous concern in proportionally juxtaposing elements around this courtyard and the counter, this empty void seems to contain an unspoken meaning encouraging dwellers to make conversation between separated spaces.

On the second level, in order to achieve the interconnected effect as mention above, the master bedroom and the bathroom has to move around.   With this new layout, there is only a small window opening connecting the master bedroom with the outdoor.  To prevent a claustrophobic atmosphere, the architects decided to raise the height of the room by realigning the false ceiling along the slope of the gable roof revealing the true geometric of this room.  Through their eyes this strange geometric provides a subtle mesmerized energy to the room.  However, they were concerned this effect would disappear if the master bathroom wall were erected at its full height.

After trying out with using a straight wall and a diagonal wall resembling a gable roof, they came to a conclusion of treating the bathroom as a barrel vault similar to an arch decoration around the exterior of the house.   By making the bathroom like an extrude barrel vault, the master bedroom obtains more opening space.  The intersecting effect between the barrel vault and the gable ceiling provides a mysterious depth to the room.

Once the barrel vault form is discovered, the architects decided to assemblage the stair and the storage system as a part of the vault geometry.  As a result, on the second, the vault, once was a result of a make do decision, has turned itself to be an important device in manipulating the space. Similar to philosophy of their practice, the architects design their own house, Baan 96/1 with an intention of finding a lasting peaceful effect the inhibit inside the house.  Baan 96/1 does not scream for any attention from the exterior approach.  All of it’s magical moment were carefully craft and place to produce a meaningful subtle effect. 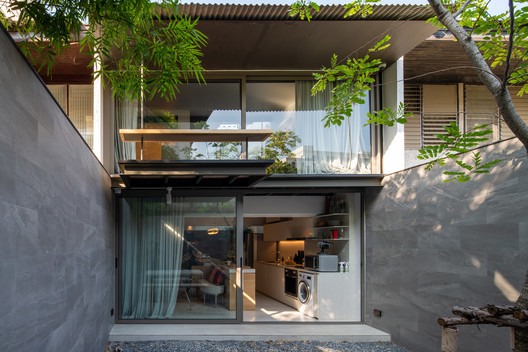 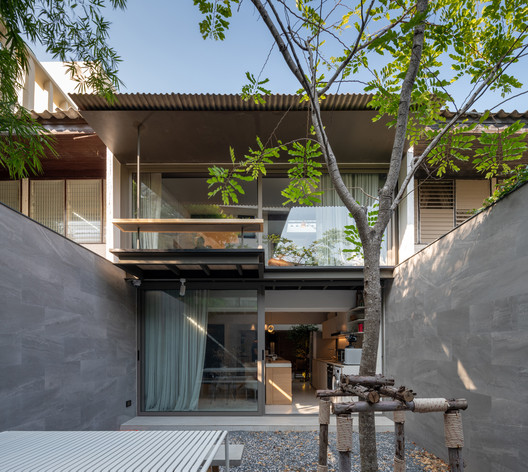