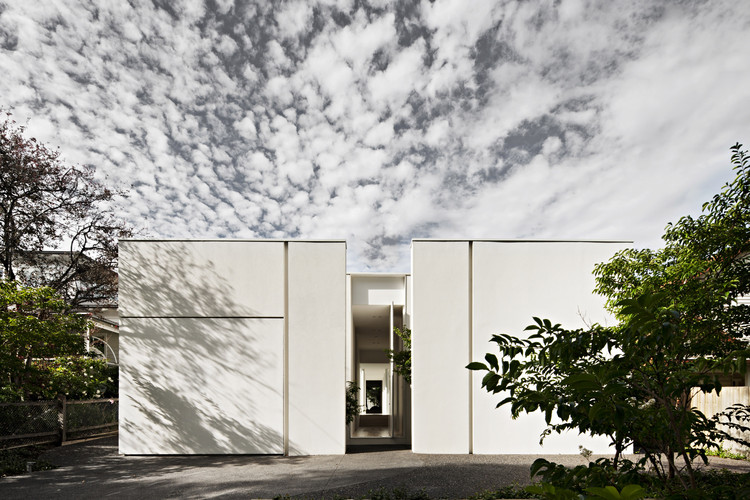 Text description provided by the architects. The design for this house was derived as framing of outdoor space, the architecture a backdrop for the family’s engagement with the garden. Stripping the architectural language back to white rendered planes, this project became an exploration into enclosing the basic rituals of domestic life within restrained building forms.

Like so many suburban sites, this one offered challenges with its size and orientation, particularly with its north-facing front garden. The house was explored as a single object within the site punctured with an internal garden. This approach enabled the new dwelling to turn its back on the adjoining properties, which are all in close proximity, and internalize the house to create its own views and aspect.

Breaking the form centrally allowed the northern light to enter both the site and the building form, without compromising either visual or acoustic privacy from the street.  Our brief was to place as much significance on the landscape and outdoor spaces as to any of the internal living spaces. Our early workshops established that the landscape was to become not just the surrounds of the architecture but central to it. Capturing the northern light and achieving a high level of privacy was also paramount.

By internalizing the garden, not only within the built form but within the site, the garden is cut off from the typical rhythm of the surrounding suburban backyards all in alignment, and a highly private, intimate, and secure north-facing habitat is created.

On arrival, the entry is defined by a single full-height puncture to an otherwise blank façade. The front façade acts as a canvas, capturing the shadows and reflections of a large oak street tree. On entry, one experiences an exaggerated threshold between interior and exterior, creating a charge of senses on arrival. In contrast to the modest and simple façade, on entering, spaces unfold, through the private sleeping areas, through the internal garden, and culminating in the main living, cooking, and dining area.

Private areas of sleeping, bathing, study, and reading are purposefully concealed from interior sightlines, whilst the public areas, in contrast, are completely open and connected to the internal garden. Further connections are made between the internal garden and space around the house, providing a layering of landscape and surrounding built form.