Save
Renovation of Villa Karma / During the Dinner Studio 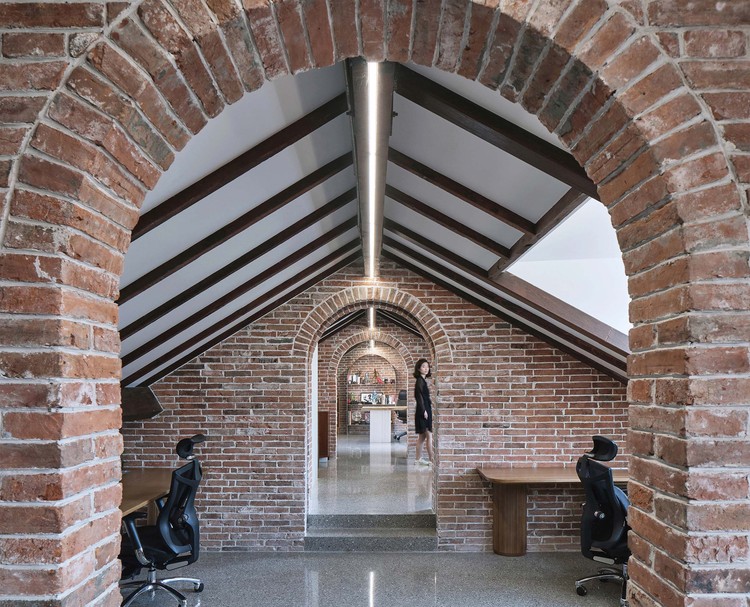 Text description provided by the architects. Villa Karma is the headquarter of KARMA, a well-known creative advertising company in Shanghai, located behind the busy Middle Huaihai Road. In early 2019, During the Dinner Design Studio was invited to transform this three-story French-style villa built in 1936 into KARMA's new site. The old house enjoys a traditional French look with vertical windows, red brick walls, fireplace chimneys, and graceful baroque oval window inlaid above the entrance. Before we take over the project, the former designer and construction team did a destructive dismantling to the old structure. The wooden floors, stuccoed walls, door and window covers, and even large trees in the courtyard were all removed. However, fortunately, the round pool, the old wooden stairs, fireplace, Roman columns and several mottled walls remain.

The renovation starts from removing the falsehood and preserving the truth, in order to reveal the layers of time and bring about a new space. The facade of this house retains its original state since 1936, and there are no obvious cracks and damages. The original French-style appearance is retained, only the debris on the outer wall is removed and the stains are cleaned. The entire building is treated with anti-seepage treatment in order to intervene as invisibly as possible. Considering airtightness and durability, only the wooden doors on the first floor, the round wooden windows above the entrance, and two wooden windows above the staircase are retained. The other doors and windows are employed with glass, providing an enlarged opening surface with thin frames and steel rotating shaft in the middle. This operation is meant to reduce the glass partition, form a transparent and concise effect while highlighting the contrast between the old and new windows.

For the interior, thanks to the wrong construction that reveals the red brick wall, we take this opportunity to expose its beauty as if the red brick and the remaining wall skin were sealed in the stack of time. As for the structure, considering the use experience and durability of the building, the original wooden floor-bearing brick wall system is transformed into a concrete floor-steel structure frame. The steel columns are hidden in fireplace flues or half-embedded in the brick wall. Tie bars are set between the brick wall and the steel structure to improve the stability.

The interior surface is modern, like a piece of white paper. Meanwhile, it is diverse with abstract frosted anodized aluminum panels, smooth epoxy terrazzo, white stucco walls and ceilings. New cladding and old substrates intertwine with each other, providing the possibility to read the history of the building.

Villa Karma is a highly personalized office that reflects the company's connotation. We try to present the concept of Karma (reincarnation) in the office. We begin with the shaping of indoor and outdoor spaces. Entering through the garden gate, one walks along a low wall. On the other end of the wall is a sunken water courtyard. A string of water running at the foot of the wall, following the pace of the guest. Upon reaching the entrance, the water turns to the right and stops in front of a concave arc wall, indicating the entrance to the garden. After flowing a round loop, the water follows the steps down to the sunken water courtyard and returns back to the low wall. A switchable awning is installed above the water courtyard. The slender steel columns fall on the slide rails of the surrounding steps, supporting the stepped awning above, which is gradually raised from the low wall towards the courtyard wall. Retracting his gaze and moving forward, one pushes to open the entrance door. A beam of sunlight casts through the oval window above to the ground. Following the direction of the light, a part of the wooden stairs leads forward. As going up, one notices a polyline-shaped decorative strip lights up at the start of the handrail, following one’s footsteps.

The lights go up all the way, through the three floors, and converges at the newly added attic floor, ending this vertical travel. Here, the structure of the stairs has been reinterpreted. The beams and columns are eliminated. If one returns to the second floor, where the living room is defined by Roman columns, one may find the wooden staircase extended to form a stepped area where one can rest, work flexibly, and even hold small lectures. It can also be seen as an extension of the floor with the same terrazzo material. Moreover, judging from the entrance on the first floor, it can also be a deformation of the zenith, an ambiguous area with the upper and lower sight lines. At the same time, when looking out from the French vertical window, the large indoor steps and the retractable canopy in the courtyard echo each other with a "staircase" element. This element is also reflected by the entrance space on the first floor with its stepped ceiling.

Due to creativity, frequent overtime work and international operation an advertising company asks, we also try to put in the design the needs of "working fun". Different from the silence and dignity that daylight casts on the mottled red bricks of the old house, we have deliberately added a layer of "foreign" color, which is set as a thin, ambiguous and unpredictable "textile" . The commonly used outdoor RGBW wall washer light is placed indoors. It thinly coats the surface of the space and changes rapidly according to needs: be it the theme color of the advertisement proposal, or the welcome animation for the visit of customers, as well as a party with a festive atmosphere. All in one. The employees’ working space is designed independently controlled lighting so that the addition of colored lights would not affect normal work. The colored lighting system also spreads to the entrance pool and sunken courtyard, using light to continue and shape the relationship between indoor and outdoor spaces. The truth of the daily fixed light and the falsehood of the temporary colored light constitute a scene of the intersection of the virtual and the reality, implying life is like a play.

Karma is also a repeated interpretation of the advertising company’s logo. The logo, which can be seen as a standing and walking person, could also be known as a face with closed eyes and contemplation, or even a variation of the calligraphy "Yong" character. We scatter its variations around in the office. In every corner of the house, it becomes a repetitive statement. The semi-circular door light above the courtyard gate is the first logo one encounters, suggesting that one has entered the ‘forbidden’ area. Within the office, it welcomes the guests next to the stairs. Up to the third floor, it evolves into the composition motif of a table top. The logo also transforms into a pool filter device and is fixed in the middle of the pool, with waterside plants planted inside. It is called the "brain circuit", meaning the fountain of literature and creativity. It then appears as a collection of water at the sunken courtyard. In addition to the logo, the spiral ladder means another symbol of Karma: the awnings of the sunken courtyard, the extended step platform on the second floor, the decorative stairs at the beginning and the end of the staircase, the artistic chandeliers on the first floor, the desk legs and discussion chairs, and even the blank space of the picture frame and part of the vase. In doing so, we push the client’s concept to an extreme in the design language. 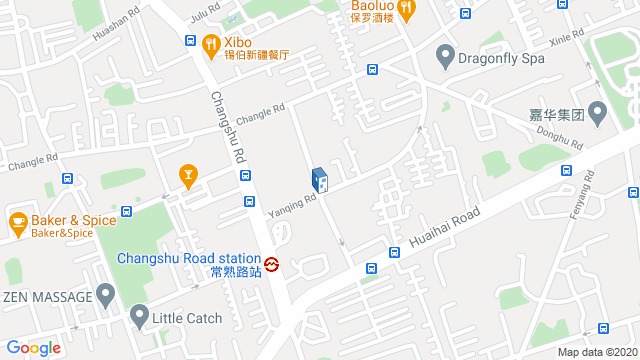 During the Dinner Studio
Office
••• 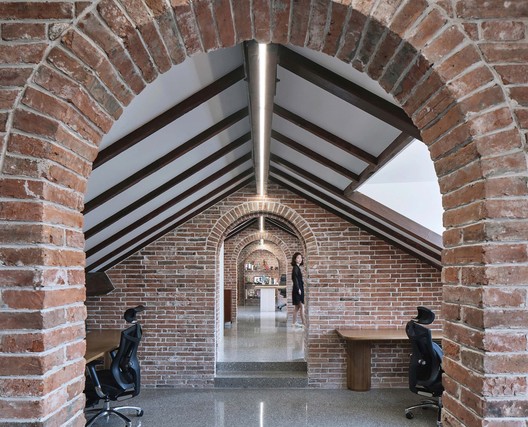