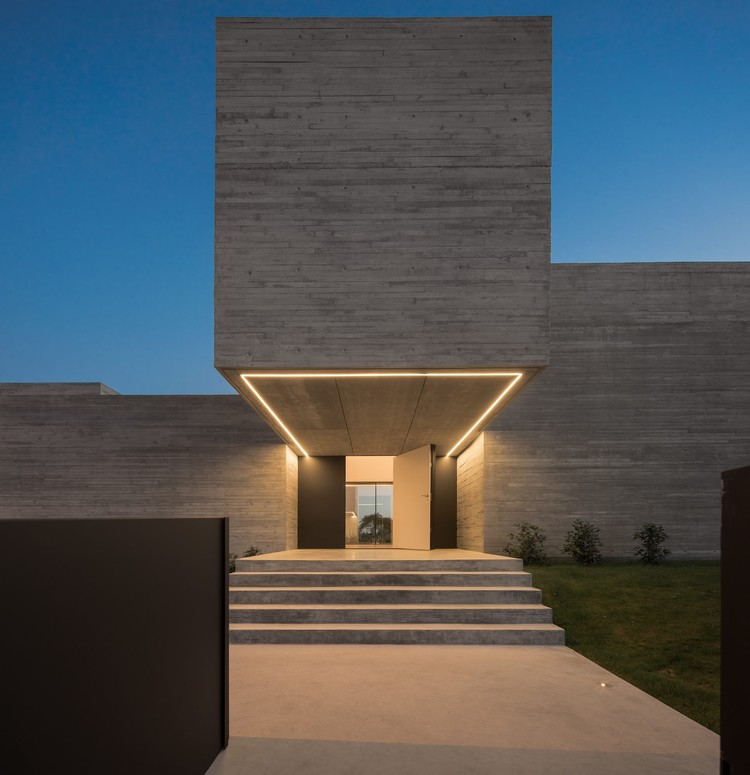 Text description provided by the architects. The great challenge behind Casa MF was to adapt to the client’s wishes, whose main premise was that the house should be built in an "L" shape. Developing an original identity and finding an answer to this request, was the main inspiration for the approach adopted in an almost imperceptible way. Then the distribution of spaces, with clarity and rationality, without the morphological obviousness hidden in the tenuous movement of the elements that accompanies the two streets that flank the volumetry.

The main façades of this irregular monolith are made of exposed concrete with wooden formwork, composed by a succession of opaque, crude, and hermetic volumes that close the house to the public exterior. For the interior of the lot, the volume is torn in order to enjoy the light and the garden, ensuring privacy facing the street.

The program of the house is distributed over a series of consecutive volumes, as in a game of embedded pieces, almost playful. Each of the volumes presents different functions, heights, and depths creating a unique spatial dynamic, and emphasizing a new reading of an “L” shaped house. New visual relationships are created between the full and the empty, between the private, semi-private areas, and the view of the central garden space where the pool is also located.

The project for a couple with two children is an ode to the resident's privacy. From the outside, the Northside is obscure and closed: from the street, it is only possible to identify two openings (one of them 5 meters high) to see the sky and the other from the bedrooms leading to the inner courtyard.

On the other hand, the rest of the light is brought by the large interior feature of the volume that illuminates the house from one end to the other, is related as well to the garden and the pool. The main access to the house is marked by a cantilevered volume that levitates over the entrance, with an imposing ceiling height that prioritizes the volume of access vis-à-vis the entire monolith. This suspended block reinforces the idea of antigravity which, following the rigid volumes, when actually entering the house, contrasts with a large plane of glass that subtly, lightly and balanced connects the outside with the view of the garden.

Next to the entrance and close to the common area, there's a study used for the owners' frequent meetings, with being a semi-public area, carefully preserves the family's intimacy. In the areas of the main room, social room, and kitchen areas and services.

A multipurpose space was designed for the youngsters, which is currently used as a playroom, with the particularity that the light entrance is on a level close to the floor, thus allowing them to be able to see the garden when they are seated playing. And in the future, when space is used as a study room, this light entry is not a distraction. The four rooms are continuous and with independent access to the garden and the pool, maintaining the indoor/ outdoor relationship without exposing its users. The bathrooms, in turn, are illuminated with zenith light through 3 rectangular skylights present in 3 bedrooms. The closets accompany the volumetric play of the house between the different scales and heights of each block.

In the master suite, two volumes of different scales are joined by a small interior patio that brings a little bit of nature into the house and accompanies the transition between the master bedroom, the bathroom, and the dressing room. The only core that is away from the rest supports the pool and is strategically positioned to obstruct and minimize the visual relationship with the house next door. The area outside and the pool is protected by this volume that obstructed the view over the living room and the garden and the neighbors. The privacy created thus has an effect on both houses. The result is a bold and textured geometric game, with different hierarchies that are structured in a sophisticated way and enhance the interaction and privacy of the inhabitants, always preserving a harmonious relationship with the surroundings.