Save
Cinema Nouveau: The Architecture of Movie Theaters
Share
Or
Copy

Cinemas mirror architecture. While the coronavirus pandemic shuttered theaters across the world for months, the industry is looking to the future as it aims to rethink the movie-going experience. As crowds flocked to the cinema after the 1918 pandemic, so too will the industry change shape again as it respond to new modes of watching films together. 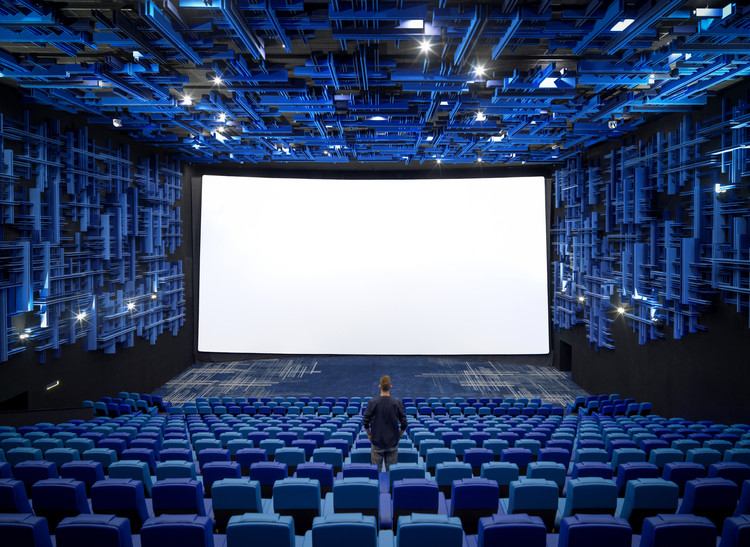 As recent years have shown, the cinema experience is already being radically reimagined. Architecture speaks through cinema. While the smallest theaters may contain only a single room and screen, more modern projects built over the last twenty years include multiple screens. These may even go so far as to include multiplexes, a concept developed in Canada in the 1950s, which span multiple theaters or many screens housed together. Now, everything from stadium seating to drive-ins are being re-examined. The following projects explore cinema design over the last ten years as theaters have evolved to house more screens, new amenities and diverse programs.

Cine Sky Cinema / One Plus Partnership

When designing this cinema in Longhua, Shenzhen, the designers recreated a virtual world of architecture as a combination of real life and virtual elements. The designers used vertical and horizontal lines to build up their design concept, where a variety of lines become scattered around the cinema.

Oldham Town Hall is a Grade II listed historic building situated in the center of a 19th century industrial town in the North West of England. The client required a solution which would save the building and kick-start the regeneration of the town center. A multi-screen cinema and family restaurants was seen as the means of achieving both aims.

Admun studio was commissioned to design Tirajhe 2 cinema lobby, the first branch of Boshra cinema complexes which is located on the food court’s floor of this well-known shopping center. The problem was that most customers of the shopping center were unaware of the existence of the cinema complex.

Commissioned by Maastricht City Council, JHK Architecten, working together with Verlaan & Bouwstra architecten, transformed the former electric power station and boiler houses of the Sphinx factory in Maastricht. After extensive restoration and renovation, the listed power station has now become the new accommodation for the Maastricht cinema Lumière.

The Filmax Cinemas in Gran Vía, located within the Gran Vía 2 shopping center, opened their doors almost 20 years ago. After this golden age and before the paradigm shift, the client wanted to straighten up the cinemas by reducing their dimension, optimizing their function and offering an experience which goes beyond what happens inside.

This multi-cinema project takes place in the future site of the “Jardin de la Culture” close to the historical city center of Riom. Once this cultural enclosure was the “Redemptoristine convent’s garden”. Nowadays, this new program offers a multimedia library project, a music school (reconversion of old convent) and the cinema project.

Garage Screen is a summer cinema located in Gorky Park in Moscow opposite the Museum of Modern Art Garage, designed by Rem Koolhaas and opened in 2015. The design reinterprets the process of watching a movie and offers a new way of experiencing cinema.

The interior of this old cinema on the historic center of Paraty, an National Heritage Site, was in ruins. The intervention is oriented by a perception that the history of this building is not frozen in time, but rather, open to continuity as a living space of culture and memory that's undergoing development.

Located in the southern quadrant of Mexico City, the National Film Archive and Film Institute of Mexico is home to the most important film heritage of Latin America. Facing total renewal, Cineteca’s original project brief included the expansion and renovation of the existing complex incorporating additional vault space and four more screening rooms.

September 2017 saw the opening of a new cinema from Yorck Gruppe in Berlin’s City West district, boasting a total of 7 screens and seating for around 600 moviegoers. Bruzkus Batek designed the interior of the auditoriums and the public spaces that connect them. The cinema’s design follows the concept of each auditorium being like an art exhibit in a large gallery.

Editor's Note: This article was originally published on October 08, 2020.