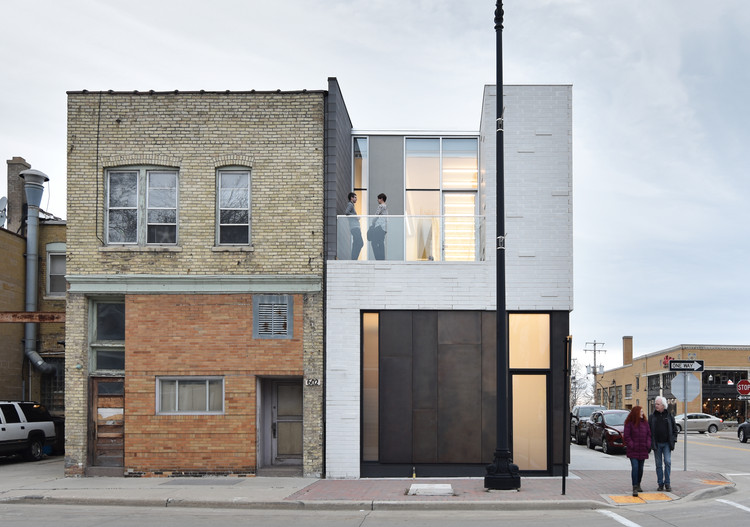 Text description provided by the architects. Located in in the heart of Racine, the Gallery and Studio building was designed for a painter and local art advocate who set out to create a new cultural anchor for the city, one that would help revitalize Racine’s currently anemic downtown. The project pairs the painter’s own studio on the upper level with a street level art gallery. Sitting on a narrow sliver of vacant land at the end of a trapezoid city block shaped by two overlapping urban grids, the 3,250 sf. building caps the block of historic brick structures and re-establishes the street edges along two important thoroughfares that connect Racine’s western neighborhoods with Lake Michigan.

While the ground-level footprint traces the orthogonal property lines, an air rights variance from the City permitted the second floor to partially cantilever over the side walk, allowing it to follow the oblique angle of Sixth Street.  As the upper level veers away from the building’s rectangular base, it forms an acute-angled overhang at the north-east corner that delineates and accentuates the site’s distinct urban condition of competing street grids and give the upper level art studio a robust street presence.

The building’s base volume housing the art gallery features a carefully detailed white concrete masonry skin that wraps over a field of tall bronze panels and strategically-placed gallery windows before extending up to clad the southern end of the art studio.  The variegation of the weathering bronze panels is juxtaposed with the material precision and crisp lines of the continuous dark-gray ribbon that articulates the cantilevered studio volume above and frames the 14’-6” tall curtain wall enclosure, its mix of transparent, translucent, and spandrel glazing providing the workspace with an abundance of natural light.  A series of 10” deep aluminum louvers significantly reduce glare inside and form a cadenced field of vertical lines whose appearance changes depending on the time of the day and the angle from which it is viewed.

A monumental pivot door serves as the main entry into the building.  The door and the wall above are perfectly flush, their matching brightly-colored finish marking the entry as a vertical threshold that extends from the ground all the way to the top of the building, where the continuous concrete ribbon from the upper level cantilever serves as a small canopy before folding down along the side of the neighboring building.

The building exemplifies the transformative role that a small but architecturally ambitious project can play in the reinvention of a struggling urban core. As soon as the structure started taking shape, it sparked renewed interest in a part of town that had laid dormant for years; many abandoned or underutilized buildings and storefronts close-by have since been renovated and put back to use. Perhaps more importantly, in the few months since it opened, the building has already established itself as a new cultural destination in Racine, attracting both locals and visitors from Southeast Wisconsin to gallery openings, community gatherings, and studio tours. 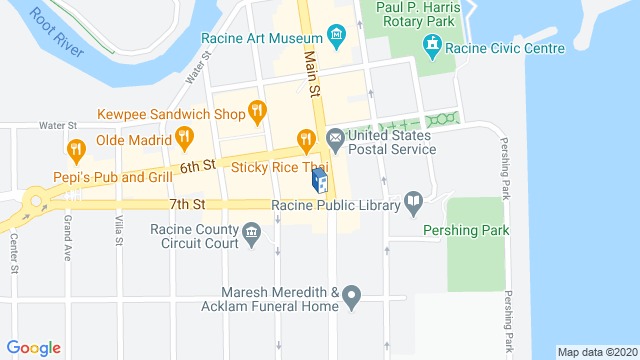 Location to be used only as a reference. It could indicate city/country but not exact address.
Share
Or
Copy
About this office
Johnsen Schmaling Architects
Office
•••