Save
The Beauty of Exposed Wooden Trusses
Share
Or
Copy 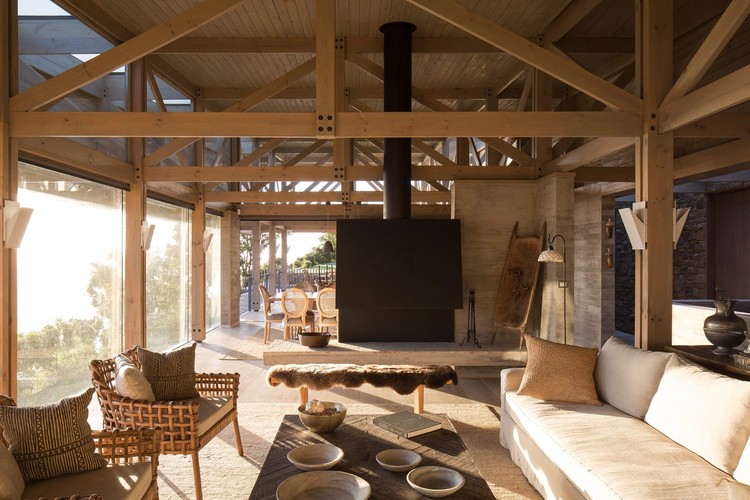 Timber trusses are wooden structural frameworks used to support roofs or other heavy structures. Fabricated from a series of triangles linked by a ridge beam and purlins, wooden trusses are structurally advantageous due to their high strength-to-weight ratios and corresponding ability to support long spans. However, these structural components can also be used for aesthetic ends, and when left exposed, can complexify, beautify, and open an interior space.

Wooden trusses were likely used as early as the Bronze Age, around 2500 BCE. Since then, they were used by the Greeks in antiquity and for various purposes during the European Middle Ages; later, Andrea Palladio’s famous Four Books on Architecture even included plans for wooden trusses. In the 1950’s, developments in construction technology improved the efficacy of the wooden truss even further, as the development of the metal connector plate, placed at the joints of the wooden truss, permitted its more efficient prefabrication.

Today, wooden trusses are still commonly used for a variety of functions due to their strength, economic use of materials, versatility, and sustainability. Wood, as a renewable and widely available building material, leaves a much lower environmental footprint than other materials and structures of comparable strength. Moreover, designers often find the aesthetic effect of the wooden truss particularly engaging, as it can make a space feel larger (by revealing, rather than concealing, the roof structure) and more dynamic. In rustically designed residential spaces, for example, the exposed wooden beams and vaulted ceiling effect can amplify the bucolic atmosphere of a rural living space. Furthermore, the structural advantages of the wooden truss can facilitate a larger and more flexible floor plan than would otherwise be possible, thus indirectly contributing to the aesthetics of a space as well.

This beautifying effect is augmented by the various possibilities of truss design, allowing architects to choose patterns that best complement the existing space. Beyond the natural variations in spacing and dimension, there exist a number of different common truss frames, though architects can experiment even outside these set classifications. The Common Truss forms a simple triangle with a lower chord joining two rafters; the Queen Post Truss adds two vertical “queen posts” within this triangle; and the King Post Truss features a single vertical post dissecting the triangle where the two rafters meet, and often includes two diagonal struts on either side further bracing the rafters.

Other more dramatic variations include the Hammerbeam Truss, which eliminates the chord (the lower beam of the triangle) and uses smaller pieces of wood to support the rafters, opening up the center of the space; similarly, the Scissor Truss uses neither a chord nor supporting vertical posts, instead applying two beams that run from the base of each rafter to the center of each opposing rafter; finally, the Arch-braced Truss substitutes the chord with an arch and a collar beam. Some trusses, like the Barrel Truss, eliminate the triangular shape completely in favor of a curved vaulted ceiling, while decorative trusses can provide the same aesthetic effect without serving any structural function.

Each of these designs serve different aesthetic functions and can complement an interior in different ways. The Queen Post, for example, draws the eye to the walls of the room, whereas the King Post Truss dramatically emphasizes the center. The open trusses, including Hammerbeam, Scissor, and Arch-braced, leave much more vertical open space through the elimination of the chord. It is the role of the architect to determine which of these options serves a space the best, both structurally and aesthetically.

Ultimately, the vaulted ceiling, dramatic effect of the truss frames, and facilitation of an open yet visually complex space can do wonders for creating a specific architectural atmosphere in residential, commercial, and even industrial designs. In some projects, the frequent repetition and dense frames of the truss can abstract the structural element into a kind of deliberate pattern; in other interiors, painting the trusses white and spacing them widely can support even a minimalist style. The variations are many and the possibilities endless for this timeless structural element.