Save
House of Passages / Chaoffice 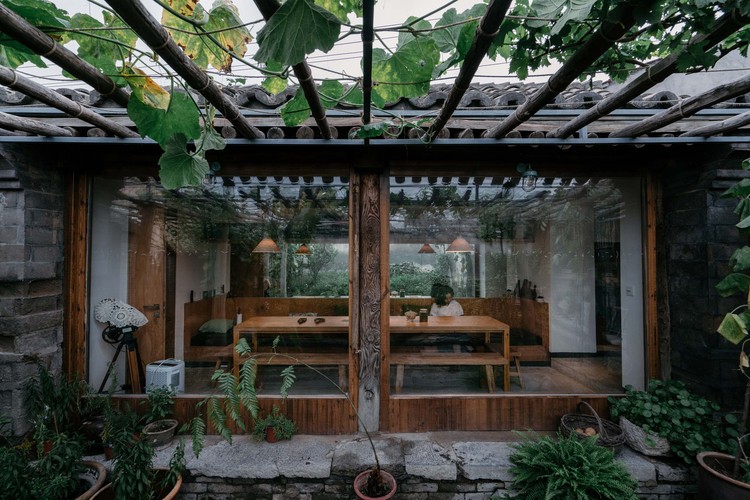 Text description provided by the architects. The project site is located within the Taihang Mountains west of Beijing. Along with “House of Steps”, it is one of two projects we have recently undertaken in Junxiang Village. Relative to the location of “House of Steps”, the original site could be described as chaotic. The site, a yard, is nestled within a narrow hutong no more than 2 meters in width. The scale of the entire site is 9 meters x 20 meters. Several existing buildings and structures inhabited and filled the yard. A building to the west measured just 2.4 meters. The closest distance between buildings was less than 1 meter. When in the yard one could experience something like walking through several small “passages”; all buildings isolated from one another. The original conditions were far from what could be described as a comfortable place to live.

An open space within the yard was used as a vegetable garden, continuously maintained by relatives of the client who still resided in the village. A variety of plants grew there, and enveloped the site, vines following the temperate structure above. Although the existing situation was terrible, upon first visiting the site we still found ourselves attracted by the low buildings and plants, and the space formed by their relationship.

The primary structure of the original yard is made up of three primary buildings and a cellar. All were built during either the early, middle, or late 20th century. Our client used to live there together with her grandparents. Although not good examples of traditional buildings, or even in good shape, those buildings are kind of treasure to client, because the trace of memory carried by them. So the principle of the renovation was to keep the existing form, color, and material of the site in order for others to receive the experiences of the past, within a modern context. In this way, it is a kind of coming back to an “ancestral homestead”. Plants everywhere create different scenes in different seasons, the little ecosystem bringing unique feelings through watching, smelling, hearing, touching, and even tasting. Keeping this “garden” was another important aim for the renovation.

The three primary buildings and cellar were all retained. The new buildings and structures are placed in between, and play a role as “connectors”, in addition to providing additional rooms and space. The original isolated nature of the existing buildings faded away and they were transformed into a connected “belt” type space. Bedrooms are located at the ends of the yard, while the “passage” between them next to the garden became public space. In this way, renovation can be seen as a kind of reconnecting. A new passage was also created for the ancient cellar, by using a hidden door accessed underneath a cushioned sitting area in the kitchen. After 30 years, the generous cellar could be used again, as a wine cellar, for food storage, or a secret children’s hideout.

The dinning room inhabited the old west building, still keeping a width of only 2.4 meters. A fixed cushioned seating area was installed along the western wall. A full sized mirror was placed between the seating area and a shelf installed on top of the wall. The eastern facade was transformed into a large glass wall, and inside and outside become one. Because of the glass wall and mirror, there is an illusion as to the scale of the space, and 2.4 meters becomes 18 meters.

The open yard has also benefited from the renovation. According to the section, if we ignore the boundary created by the glass wall, the landscape looks like a valley. Both ends, east and west, are higher, and the central area is lower. We used old elements harvested from the original structures to create pillars, and took a truss made up of small 3cm x 3cm steel tubes and placed it on top of these pillars. Because the steel tubes are small, when vines grow in-between leaves envelope and cover the structure. The plants cause the boundary to blur, in cooperating with the landscape, and the yard becomes an enveloped space. The experience of living in a garden can be recalled and is emphasized.

New “passages” are inhabited by the entrance, kitchen, dining room, and a small living room. As with the originally chaotic feeling carried by the yard in its original state, we wanted to deal with the relationship between old and new in a more ambiguous way. The wall and ceiling have been cut in several places, causing the ancient structures and materials to be exposed. The old, dark, blurry surfaces appear side by side with the new, bright, clear ones. In some places, behind the cutting, hidden spaces are revealed; dark corners full of unique charm. In this situation, “passages” take on the meaning of timeliness. The so called “ancient home” seems to re-present itself.

The 3 bedrooms which inhabit the corner areas of the yard each provide their own unique experiences according to the character of the original space.

The north building originally functioned as the grandparents bedroom, as well as the main room for the yard. We left the space largely untouched in terms of appearance, and instead focused on integrating various new systems, two layer door and windows, a curtain system, and a lighting system. We transformed old doors, which were abundant in the yard, into the structural elements for all lighting on the ceiling.

The room on the southern end is in the middle between two smaller yards. Two sides of the room, as well as the ceiling of the shower, are all covered by glass. In this way, people can truly feel that they are living within a garden.

The eastern building takes up a very small area, which was formerly used as a storage room. The new steel structure lifts up the roof creating a new attic, which plays the role as the third bedroom. Since the building is higher than the outside wall of the yard post renovation, the attic space represents an additional volume on top of the old wall, and becomes a unique characteristic easily noticed by passersby in the small hutong. At night, the lights emanating from the attic act as an additional source of light for the hutong below.

“Garden” and “Ancestral Homestead”, in the case of “House of Passages”, made up a very complex contextual topic as we tried to understand how we could establish a sense of connection. “Passage” became the carrier for this, and the continuity which we focused on for so long was born from it. However it is still not powerful enough to rule all invisible intentions. Ultimately, we’ve found a new way of thinking via embracing the irrational and chaotic. 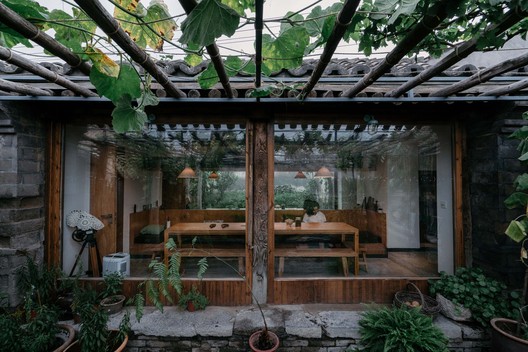