Team V Architectuur, an architecture office based in Amsterdam, is designing the new Dutch timber hybrid head office for DPG Media at the Amstel Business Park in the Netherlands. In collaboration with DELVA Landscape Architecture/ Urbanism for the landscape and outdoor space, the project will generate a 46.000 square meter of healthy and sustainable working environment.

Destined for DPG Media and the editors of several major Dutch newspapers, magazines, and radio shows, the new headquarters will be “one of the largest timber hybrid offices in the world”. Including Arup, DGMR, SkaaL, SmitsRinsma, and Thonik, the design team led by Team V Architectuur will create a communications hub. Located at Amstel Business Park South, the structure will put in place editorial offices, recording studios, test labs, meeting rooms, restaurants, and an event venue. Developed by Being, DPG Media is expected to start using the new office in 2023, while construction is scheduled to start in early 2021.

Constructed on an existing car park adjacent to the printing house of the media company, the project will group all the different Dutch publications, radio stations, and online media of DPG Media under one roof. Seeking to transform Amstel Business Park Zuid from a traditional business park into a mixed urban area called Werkstad Overamstel, the building will lead the way for future developments.

Team V, best known for the Rotterdam Central Station, the new building and renovation of the House of Province in Arnhem, and the renovation of the main building Atlas of the Eindhoven University of Technology, has imagined a healthy and sustainable office building “with ample daylight, multiple green areas and sufficient space for both creative interaction and individual concentration”. Constructed with glulam timber, the building is composed of three connected elements that sit on a continuous plinth of green roof terraces.

Surrounded by a green veil with plants and trees that connect the ground level with the roof terraces and the building, the project focuses on nature inclusion. In fact, “the green spaces in, on and around the building play a connecting role and ensure that the people working in the office come into contact with each other and the outside world”. 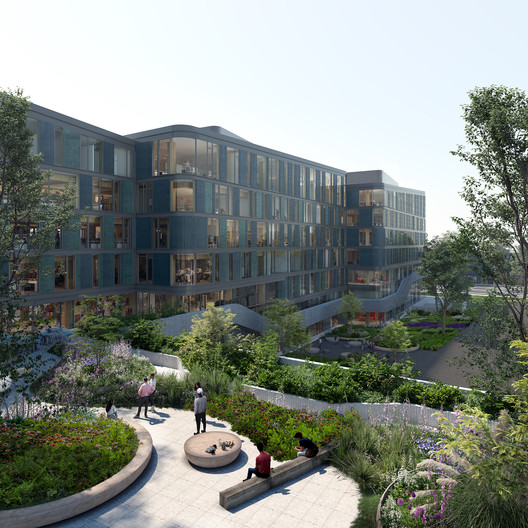